A new paper explores the predominantly Iberian branch of Y-DNA haplogroup R1b which is timely because the narrative that explains the population genetics of Iberia is much less clear than most other places in Europe. 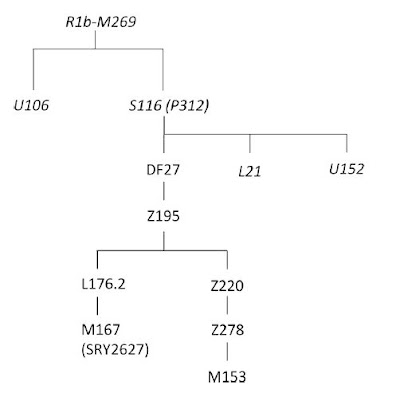 The most common Y-DNA clade in Western Europe is R1b-M269. As Bernard's Blog explains (note that all translations are Google translated from the original French with my editorial improvements of those translations):

The most important branches of M269 are U106 common in the Netherlands and Northwestern Germany, and P312 common in Western Europe. The latter is divided into three main branches: U152 common in Switzerland and Northern Italy, L21 common in the British Isles and DF27 frequent in the Iberian Peninsula.

Y-DNA R1b-DF27 predominant in Iberia and especially in Basques and parts of Eastern Spain that were Vasconic linguistically in historically attested times.

This Y-DNA R1b clade is a sister clade to the R1b haplogroups found in the British Isles and in Switzerland and Northern Italy. But, it is a more distant relative of the R1b clades around in the Netherlands and Northwest Germany (which is close to the area where the Germanic languages emerged, probably much later based upon linguistic evidence).

The new blog post focuses on a paper analyzing Y-DNA R1b-DF27 which is the most common in Iberia (especially Basque territory and Catalonia), and spills over into France as illustrated in the geographic distributions below: 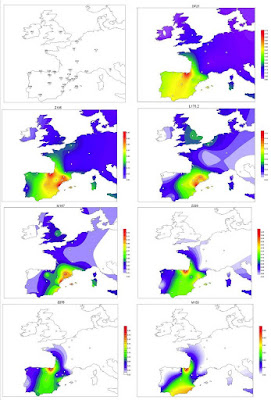 DF27 is found at a frequency ranging from 30% to 50% in the Iberian Peninsula except in the Basque Country where Frequency reached 74%. In France, the frequency varies from 6% to 20% with an average of 11%. Elsewhere the frequency is 15% in Great Britain but almost nil in Ireland and 8% in Tuscany.

The inferred ages of these clades coincides well with an arrival fairly early in the Bell Beaker era, followed by local differentiation.

Models of Bayesian analysis show that DF27 extended in the Iberian Peninsula mainly between 3500 and 3000 years, i.e. in the Middle Bronze Age. These results are to be compared with those of ancient DNA in Portugal which show the dominance of haplogroup R1b in the Middle Bronze Age. This points to an origin of the haplogroup R1b-DF27 in eastern Spain.

Our access to ancient DNA is limited, but the ancient Iberian Bell Beaker DNA that we do have shows quite modest levels of autosomal steppe ancestry, but basically total replacement of Y-DNA R1b, which would be consistent with a male dominated migration event that was diluted in autosomal impact by multiple generations of marriages to non-steppe women with early European farmer and Western hunter-gather ancestry.

If Y-DNA R1b-DF27 mere were the source of the Bell Beaker phenomena, one would expect an age for the clade of about 4900 years and a point of origin based on clade ages and maximum diversity in Southern Portugal. But, that isn't what we see. Indeed, many important sub-clades of Y-DNA R1b-DF27 are entirely absent from Portugal and the clades we do see are heavily concentrated within Iberia in historically attested Vasconic areas, casting doubt on the hypothesis of a broader Vasconic linguistic area, particularly within Iberia.

Origins for R1b-DF27 in Eastern Spain ca. 2600 BCE to 2500 BCE suggest a maritime or southern European coastal route of these R1b men into Spain. The location of the Northern Italian sister clade of DF27 also supports a maritime or coastal route. This is several hundred years after the Bell Beaker phenomena begins in Southern Portugal ca. 2900 BCE. Presumably, these men adopt the Bell Beaker culture when it expands to their territory, rather than playing a part in its formation.
Posted 2:03 PM
Email ThisBlogThis!Share to TwitterShare to FacebookShare to Pinterest
Labels: Europe, genetics, history, language

You'll notice too that the Barcelona Beakers were around 50% R1b, but had little to no Steppe ancestry. (Although no resolution below M269). But is nevertheless in the diversity epicenter you mention for DF27. Of course this is in light of the low CHG problem in BA Portugal.

This is a bit off topic, but, because Andrew has been a staunch supporter of the hypothesis of a Basque-related origin of Y-DNA haplogroup R-M269 among extant Europeans (and, concomitantly, the indigeneity and genetic isolation of Basques), I would like to bring his attention to the Palaung-Wa peoples, who presently inhabit some areas from southern Yunnan in China through eastern Myanmar and northwestern Laos to northern Thailand.

The Palaung-Wa languages are classified as a branch of the Austroasiatic languages, which have been associated with Y-DNA haplogroup O-M95 on the basis of the isolated peoples of the Nicobar Islands (apparently 100% O-M95, though samples analyzed so far have been small in number) and the peripheral Kolarian/Munda-related peoples of India, who presumably could not have got their high frequencies of O-M95 Y-DNA from any source besides their Austroasiatic-speaking ancestors. Most Austroasiatic-speaking populations in Southeast Asia also have exhibited O-M95 Y-DNA with high frequency, especially tribal minorities living in parts of Laos or Cambodia. There really seems to be little evidence that would contradict the hypothesis of an origin of the Austroasiatic languages in a population that bore (mainly or exclusively) O-M95 Y-DNA.

However, samples of extant Palaung-Wa-speaking peoples have tended to exhibit greatly reduced frequencies of O-M95 Y-DNA:

People of the Palaung-Wa group who have been tested as part of autosomal clustering analyses have appeared to be a composite of ancestries of Mainland Southeast Asian (i.e. probable Austroasiatic) affinity and Mainland East Asian (roughly "Chinese," though it is also predominant among peripheral peoples like the Tibetans and the Koreans) affinity in approximately equal proportion. The Ava sample of Cai et al. 2011 provides an example of a linguistic community that has completely (or nearly so) replaced what was probably the Y-DNA carried by the original speakers of the community's language with the Y-DNA of some foreign incomers while maintaining linguistic continuity to a great extent and also their autosomal heritage in dilution.

"Andrew has been a staunch supporter of the hypothesis of a Basque-related origin of Y-DNA haplogroup R-M269 among extant Europeans (and, concomitantly, the indigeneity and genetic isolation of Basques),"

I do not assert that the Basque are indigenous to Iberia (linguistically it is hard to know with a Roman conquerer adopting the Greek language scenario being possible) Instead, I have asserted that:

* The proto-Basque men were copper age or early Bronze Age migrants from some place in the vicinity (not very specifically delineated) of the Southern Pontic-Caspian Steppe to Crete and/or the Balkans, whose genes spread with Bell Beaker expansion. I absolutely agree that R1b-M269 that is the source of the R1b there now did not arrive in Western Europe in either the Upper Paleolithc, or Mesolithic, or first wave Neolithic.

* The Basques have had minimal IE admixture in the post-Bell Beaker era.

* The language shift to IE Celtic did not involve much more of a demic component than about 50% of the Y-DNA R1a percentages in these regions.

* The languages replaced by IE Celtic were quite likely Vasconic.