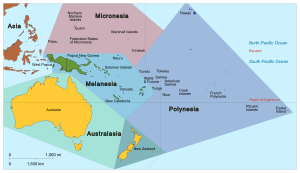 A major study of the current autosomal genetics of Oceania largely supports the existing paradigm with some fairly subtle nuances in the post-Austronesian period that also demonstrates that there was linguistic diversity among the founding populations of the Solomon Islands.

A widely accepted two-wave scenario of human settlement of Oceania involves the first out-of-Africa migration ca 50,000 ya, and one of the most geographically-widespread dispersals of people, known as the Austronesian expansion, which reached the Bismarck Archipelago by about 3,450 ya. While earlier genetic studies provided evidence for extensive sex-biased admixture between the incoming and the indigenous populations, some archaeological, linguistic and genetic evidence indicates a more complicated picture of settlement. To study regional variation in Oceania in more detail, we have compiled a genome-wide dataset of 823 individuals from 72 populations (including 50 populations from Oceania) and over 620,000 autosomal SNPs.

We show that the initial dispersal of people from the Bismarck Archipelago into Remote Oceania occurred in a "leapfrog" fashion, completely by-passing the main chain of the Solomon Islands, and that the colonization of the Solomon Islands proceeded in a bi-directional manner. Our results also support a divergence between western and eastern Solomons, in agreement with the sharp linguistic divide known as the Tryon-Hackman line.

About time someone did this analysis!

"These results suggest that the initial colonization of Remote Oceania was by people whose ancestors had not yet mixed with Papuans, and that Papuan ancestry was introduced to Remote Oceania by more recent migrations".

Oh dear. Another point of argument between me and Maju all along. To me it has always been obvious that there was a secondary movement east from the Solomons of Papuans over top of an Austronesian expansion. But I hadn't realised the extent of secondary movement!

That could be the explanation.

I've skimmed through the paper but haven't really firmly assimilated what it has to say yet. It is certainly a more colorful history with more human agency and choice than the standard bland narrative.