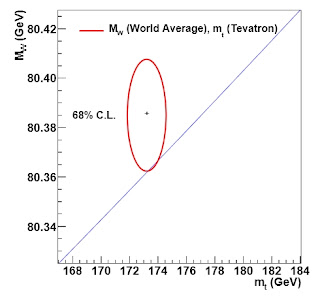 This relationship also suggests that we should expect more precise future W boson mass measurements to favor the low end of the current error bars on this measurement (a difference from the central world average value of about 0.03%), while future measured top quark mass may be just a tad higher than the current best estimate (which is known with a precision of +/- 0.6%), although probably not quite as close to the error bar boundaries for that measurement.  This is because, with greater precision, I expect that the data will more precisely confirm, rather than contradict the Standard Model prediction.

But, if the world average values of the W boson mass doesn't shift a bit lower as measurements of this value become more precise, this may be a signal of beyond the Standard Model physics.  However, if the average value remained unchanged, the error margins would have to shrink by another factor of five (as much as they did in the last twelve years or so), in order for this discrepancy to meet the threshold for considering an experimental result a new discovery, and this is likely to take more than twelve years to happen again given the kinds of experiments that are on the drawing board today.

Note that the top quark mass estimate is actually much less precise on a percentage basis than the W boson mass determination by a factor of about twenty or so.  It doesn't intuitively look that way on the chart because the X and Y axis have different scales even though they are both in the same units.

Great post. Thanks for passing along this interesting data set in way that is easy and clear to follow.
It seems that the Standard Model once again passes an experimental test with flying colors.
If only we knew why the Standard Model works so well and knew the underlying relationship behind the ~20 constants in the SM that have to be experimentally calculated.
Well, there's still more work to be done to piece everything together.