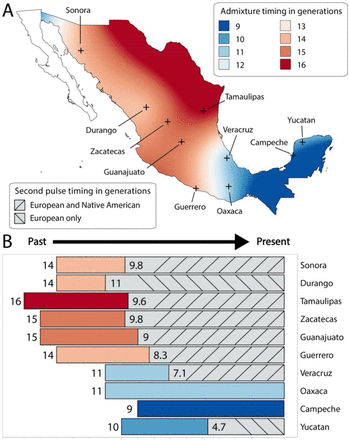 Researchers were also able to characterize a Filipino ancestry component derived from the historically attested 17th century Manila Galleon trade between the colonial Spanish Philippines and the Pacific port of Acapulco in Spanish Mexico which has not previously been identified as a contributor to Mexican ancestry. The body text notes that:

In order to pinpoint the origin of the Asian component in Mexico, a MAAS-MDS was performed with a reference panel of East Asian, Southeast Asian and Oceanian populations. Cosmopolitan Mexicans having more than 5% combined East Asian and Melanesian ancestry were included, resulting in one individual from Sonora, one from Oaxaca, one from Yucatan and twelve from Guerrero.

Sonora and Yucatan grouped near Chinese reference populations; Oaxaca clustered broadly with maritime Southeast Asia; while Guerrero showed a heterogeneous profile. No cosmopolitan Mexican sample showed Melanesian variation; therefore, the MAAS-MDS plot was zoomed into, excluding populations with Melanesian contributions, for visibility. Most individuals from Guerrero clustered with maritime Southeast Asia, except for one individual positioned near southern China. Individuals from Guerrero resemble western Indonesian and non-Negrito Filipino populations, specifically those from Sumatra, Mindanao, Visayas and Luzon. Admixture dating of these Asian haplotypes in Guerrero using Tracts fit a single pulse admixture model at 13 generations ago, or in 1620 CE using 30 years per generation. . . .

This coincides with the Manila Galleon slave trade during the colony, which had a period of activity from 1565 to 1679 CE. This slave trade route originated after the need for additional labor arose due to the demographic collapse of the native populations, and ended when these Asian slaves, mostly residing in Spanish colonial Asia, were actively declared indigenous vassals of the crown and thus free. At that time the Atlantic slave trade from Africa became predominant over the Pacific route. This Southeast Asian component from the Manila Galleon trade could have extended to neighboring coastal Pacific areas of southern Mexico, as could be the case of the individual from Oaxaca.

Moreover, although historical records report the residence of “Chinos” predominantly in Guerrero, smaller numbers are also recorded in places such as Colima, Guadalajara, Zacatecas, San Luis Potosi, Veracruz, Puebla, Toluca and, in particular, Mexico City. Thus, we do not rule out the presence of this component in the other populations from the study due to insufficient sampling or statistical power, as well as locations not considered in this study.
On the other hand, East Asian ancestry in Sonora and Yucatan, both distant locations from Guerrero, could possibly represent post-colonial migration events, such as Chinese immigration, mainly from the Guangdong Province, into northern Mexico and the immigration of Korean henequen workers into the Yucatan Peninsula, both occurring during and after the Porfiriato Period (between 1880 and 1910 CE). However, more extensive sampling across the country is needed to shed light on these genetic signals in order to associate them with these post-colonial historical events.

The discussion section of the paper is unusually multidisciplinary and thoughtful. Reads the whole thing.

Mexico has considerable population substructure due to pre-Columbian diversity and subsequent variation in admixture levels from trans-oceanic migrations, primarily from Europe and Africa, but also, to a lesser extent, from Asia. Detailed analyses exploring sub-continental structure remain limited and post-Columbian demographic dynamics within Mexico have not been inferred with genomic data. We analyze the distribution of ancestry tracts to infer the timing and number of pulses of admixture in ten regions across Mexico, observing older admixture timings in the first colonial cities and more recent timings moving outward into southern and southeastern Mexico.

Finally, in Acapulco, Guerrero a notable proportion of East Asian ancestry was observed, an understudied heritage in Mexico. We identified the source of this ancestry within Southeast Asia—specifically western Indonesian and non-Negrito Filipino—and dated its arrival to approximately thirteen generations ago (1620 CE). This points to a genetic legacy from the 17th century Manila Galleon trade between the colonial Spanish Philippines and the Pacific port of Acapulco in Spanish Mexico. Although this piece of the colonial Spanish trade route from China to Europe appears in historical records, it has been largely ignored as a source of genetic ancestry in Mexico, neglected due to slavery, assimilation as “Indios” and incomplete historical records.

Another Search For Lepton Universality Violation Comes Up Empty

While there are tensions with the Standard Model prediction of lepton universality (i.e. that charged leptons have the same properties except mass), from a couple of kinds of B meson decay, only one of which exceeds three sigma, a test of isospin partners of those same decays (albeit with less precision) find no statistically significant deviation from the Standard Model prediction, making the anomaly less likely to be real.

LHCb collaboration, "Tests of lepton universality using B0→K0Sl+l− and B+→K∗+ℓ+ℓ− decays" arXiv:2110.09501 (October 18, 2021).
This tends to support an interpretation of the prior lepton universality violation indications as a fluke or some sort of unrecognized systemic error because these are isospin partners of the cases where apparent violations were seen. The body text of the Letter explains this while also noting that the reduced precision of this measurement is also a factor:

Forces in the SM couple to the charged leptons with equal strength, which is referred to as lepton universality. Therefore, these ratios are predicted to be very close to unity, with small corrections due to the muon-electron mass difference. Furthermore, these ratios benefit from precise cancellation of the hadronic uncertainties that affect predictions of the branching fractions and angular observables. Significant deviation from unity in such ratios would therefore constitute unambiguous evidence of BSM physics.
The ratio RK∗0 , measured by the LHCb collaboration using the data collected in the q 2 regions 0.045 < q2 < 1.1 GeV2 /c4 and 1.1 < q2 < 6.0 GeV2 /c4 , is in tension with the SM predictions at 2.2–2.4 and 2.4–2.5 standard deviations (σ), respectively. A measurement of RK+ performed in the region 1.1 < q2 < 6.0 GeV2 /c4 deviates from the SM by 3.1 standard deviations. The analogous ratio measured using Λ 0 b → pK−` +` − decays, RpK, is consistent with the SM within one standard deviation. All four measurements show a deficit of b→ sµ+µ − decays with respect to b→ se+e − decays.
In addition, angular observables and branching fractions of b→ sµ+µ− decays have been measured, with several in tension with the SM. However, the extent to which they may be affected by residual quantum chromodynamics contributions remains uncertain. Intriguingly, it is possible to account for all these anomalies simultaneously through the modification of the b→ s coupling in a model-independent way. Such a modification can be generated by the presence of a heavy neutral boson or a leptoquark, as well as in models with supersymmetry, extra dimensions, and extended Higgs sectors.
The B0→ K0 S ` +` − and B+→ K∗+` +` − decays are the isospin partners of B+→ K+` +` − and B0→ K∗0 ` +` − decays and are expected to be affected by the same NP contributions. Testing lepton universality by measuring the ratios RK0 S and RK∗+ can therefore provide important additional evidence for or against NP. However, while these decays have similar branching fractions to their isospin partners, O(10−6 ) to O(10−7 ), they suffer from a reduced experimental efficiency at LHCb due to the presence of a long-lived K0 S or π 0 meson in the final state.

Proponents of the anomaly argue that the central values weren't that much different from previous ones despite a lack of statistical significance. 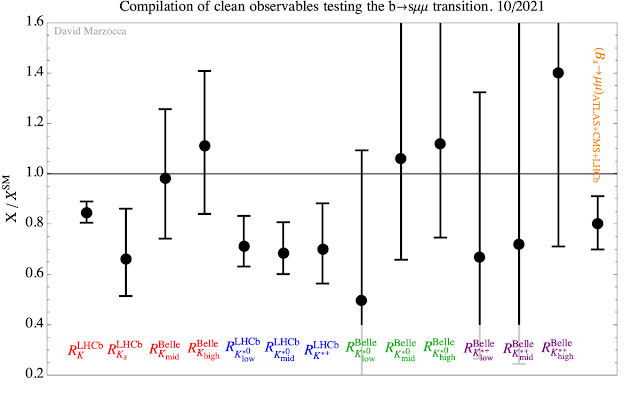 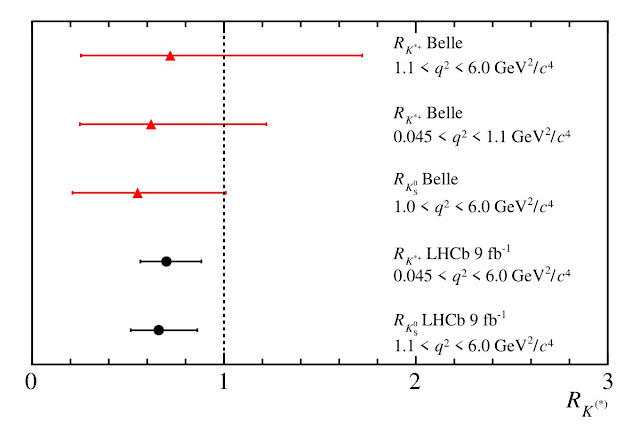 It is also worth considering that a b-->s transition does not happen at tree level in the Standard Model. It requires a W- boson interaction from a b quark to an up-like quark followed by a transition from an up-like quark to an s quark in a W+ interaction at the one-loop level, or a further iteration of up-quark and down-quark pin pong at the three and/or five loop level.

And, an sµ+µ− end product can decay to an se+e- end product plus a pair of neutrinos via an additional round of weak force interactions by the muons (along with additional decay products, some of which would cancel out virtually or be to invisible neutrinos), although these would usually be rather slow compared to the other decays (particularly if the muons are traveling at the relativistic speeds that they would be with these kinds of energies).

The complexity of the possible paths makes it harder to model correctly.

I apparently missed this one when it came out last year. The existence of this ancient DNA was paradigm confirming as Tibetan modern DNA shows that high altitude adaptations in the region were introgressions from Denisovans.

Two archaic lineages overlapped with modern humans outside of Africa: the well-studied Neanderthals and their more mysterious cousins, the Denisovans. Denisovan remains are rare, being limited to Denisovan Cave in Siberia and a putative, undated jaw from Tibet. However, there is evidence for multiple introgressions from Denisovans into modern-day humans, especially in Australasian populations. By examining the sediment of Baishiya Karst Cave located on a high plateau in Tibet, Zhang et al. identified ancient mitochondrial DNA from Denisovans indicating their presence at about 100 thousand, 60 thousand, and possibly 45 thousand years ago. This finding provides insight into the timing and distribution of Denisovans in Asia and extends the time of occupation of the Tibetan plateau by hominins.

A late Middle Pleistocene mandible from Baishiya Karst Cave (BKC) on the Tibetan Plateau has been inferred to be from a Denisovan, an Asian hominin related to Neanderthals, on the basis of an amino acid substitution in its collagen. Here we describe the stratigraphy, chronology, and mitochondrial DNA extracted from the sediments in BKC. We recover Denisovan mitochondrial DNA from sediments deposited ~100 thousand and ~60 thousand years ago (ka) and possibly as recently as ~45 ka. The long-term occupation of BKC by Denisovans suggests that they may have adapted to life at high altitudes and may have contributed such adaptations to modern humans on the Tibetan Plateau.