Yes, Particle Physics Is That Weird

A new comic from xkcd accurately illustrates how weird particle collider physics is in a way that the average person can understand. 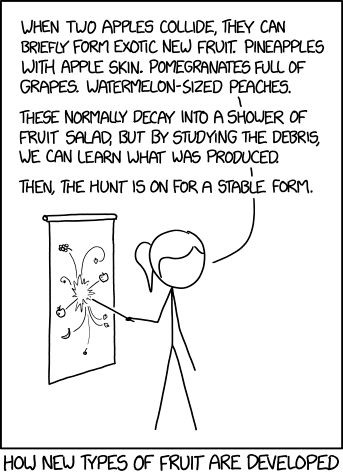 The most delicious exotic fruit discovered this way is the strawberry banana. Sadly, it's only stable in puree form, so it's currently limited to yogurt and smoothies, but they're building a massive collider in Europe to search for a strawberry banana that can be eaten whole.

Actually, plain old organic chemistry is almost as remarkable. One of my most memorable high school experiences (while I was a high school student in New Zealand) was producing esters from noxious seeming chemicals in the lab that smelled exactly like familiar fruits and other smells, because those smells, at their most essential levels, are these chemicals.

For example, pineapple smell is partially allyl hexanoate and ethyl butyrate is a chemical in the smell of pineapple, strawberry and banana.

European Population History In a Nutshell

You too can watch European population figures, by country, unfold with video maps and dramatic music for every year since 400 BCE, over a little less than twelve minutes.

One insight is how thinly populated places like Britain were until quite recently.

Another is that political boundaries are anything but static in the long run.

It also brought to my attention the Novgorod Republic in what is now Northern Russia, that lasted nearly three centuries in the late Middle Ages and was one of the earliest and most successful democratic experiments which is often overlooked.

A paper reviewed by Bell Beaker blogger assembles evidence that local people who encountered Bell Beaker elites at first tried to copy Bell Beaker pottery using their own techniques until their pottery had fully assimilated into the Bell Beaker approach.

This also suggests that people who copy one aspect of Bell Beaker culture might copy others in a similar elite dominance fashion, resulting in heavy borrowing from, or even language shift to, the language spoken by the newly arrived Bell Beaker people.
Posted 11:30 PM 0 comments
Email ThisBlogThis!Share to TwitterShare to FacebookShare to Pinterest
Labels: anthropology, culture, Europe, language, technology

This is Quantum Field Theory, the universe of ripples. Democritus said that in truth there are only atoms and the void, but he was wrong. There are no atoms. There is only the void. It ripples and shimmers, and each of us lives as a collection of whirlpools, skimming the surface, seeming concrete and real and vital…until the ripples dissolve, and a new pattern comes.

New Results From KLOE-2 And LHCb

The KLOE-2 experiment has released some new results.


1. It confirmed Standard Model predictions regarding the running of the electromagnetic coupling constant at energy scales from 0.6 GeV to 1.0 GeV.

2. It expanded the range in which the carrier boson for dark matter interactions (a.k.a. a dark photon) is ruled out. The exclusions are the most strict of any experiment in the 0.7 GeV to 1 GeV boson mass range. Such a boson could also explain muon anomalies if they existed.

3. It searched for CPT violation in neutral kaon systems and ruled them out to high precision, with considerable room for improvement simply by continuing to run the experiment to reduce statistical error.

The KLOE-2 results reach the sensitivity at the level of 10^−18 GeV 20, which is several orders of magnitude more precise than results obtained with other neutral meson systems a . The results were obtained with the data sample corresponding to the 1.7 fb^−1 integrated luminosity, and is mainly limited by the statistical errors[.]

The total amount of data collected will be about three times as great as the amount collected so far.

Meanwhile, at the LHC, charm quark properties (mainly determined through studies of neutral D mesons which made made up of charm quarks and antiup quarks, or up quarks and anticharm quarks) have not found any sign of CP violation in the system (where the Standard Model prediction is that CP violation be less strong than the experiment is capable of distinguishing). The most recent paper on this topic from LHCb concludes that:


The measurement of the mixing parameters and the searches of CPV in the charm sector provide a precise tests of the SM and probes of New Physics effects, complementary to analogous searches with B and K mesons. The LHCb experiment has used a world-leading sample of charm particles to provide a set of measurements based on the Run 1 data which confirmed the SM predictions. The no-mixing hypothesis for D0 system has been excluded at more than 10 σ level, based on data gathered in Run 1. Results based on both prompt and double-tagged candidates are in agreement. All measurements are consistent with the no-CP violation hypothesis. The current precision reached is of order of 10−4 for the indirect searches. The majority of the measurements are statistically limited, and some of the systematics factors are expected to reduce with signal yields. Currently, several Run 1 and Run 2 based analyses are ongoing. The Run 2 measurements benefits not only from the higher statistics but also from the optimized trigger.

Many investigators favor a form of dark energy that can vary over time to the cosmological constant, although both theories can fit the evidence within the bounds of statistical significance. A varying dark energy cosmology, when applied to available data, more tightly bounds the upper limit to the sum of the neutrino masses.

We explore cosmological constraints on the sum of the three active neutrino masses  in the context of dynamical dark energy (DDE) models with equation of state (EoS) parametrized as a function of redshift  by , and satisfying  for all . We perform a Bayesian analysis and show that, within these models, the bounds on \textit{do not degrade} with respect to those obtained in the CDM case; in fact the bounds are slightly tighter, despite the enlarged parameter space. We explain our results based on the observation that, for fixed choices of  such that  (but not  for all ), the upper limit on  is tighter than the CDM limit because of the well-known degeneracy between  and . The Bayesian analysis we have carried out then integrates over the possible values of - such that , all of which correspond to tighter limits on than the CDM limit. We find a 95\% confidence level (C.L.) upper bound of . This bound can be compared with  at 95\%~C.L., obtained within the CDM model, and  at 95\%~C.L., obtained in a DDE model with arbitrary EoS (which allows values of ). Contrary to the results derived for DDE models with arbitrary EoS, we find that a dark energy component with  is unable to alleviate the tension between high-redshift observables and direct measurements of the Hubble constant . Finally, in light of the results of this analysis, we also discuss the implications for DDE models of a possible determination of the neutrino mass hierarchy by laboratory searches. (abstract abridged)