Sea Monster From Half A Billion Years Ago Described 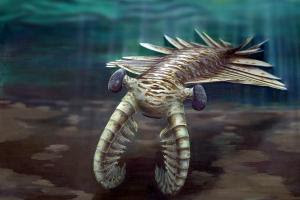 About 515 million years ago, an early three foot long arthropod (i.e. bug), from a category ancestral to the various subtypes of arthropods that exist today looked like the picture above, and according to an article in the journal Nature, it was a top level predator roaming the seas. This was determined on the basis of a rare well preserved fossil from Australia. Its compound eyes, which were exceptionally well preserved, were three centimeters long and had a resolution similar to that of a modern dragonfly, one of the sharpest eyed arthropods alive today. It predates many of the distinguishing features used to distinguish taxa such as insects, spiders and crabs, from each other (and predates some distinguishing features that all of them share).

This just goes to show that some of the monsters imagined in science fiction aren't really so unrealistic.
Posted 3:08 PM
Email ThisBlogThis!Share to TwitterShare to FacebookShare to Pinterest
Labels: evolution

I'm sure that if it had survived in that form to the present that it would have been a delicious meal.

Seriously: on second thought, what is being emphasized in the news about this "lobster" are its eyes and there is only one living artropod I know of which such good vision: the mantis shrimp.