Genetic evidence and historical records, taken together, suggest that the Black Plague may have first arrived in West Eurasia from an East Asian source around 541 CE, possibly via the Silk Road Trade or Turkic Huns or Avars.  This caused massive loss of life then, rivaling the damage it did when it resurfaced in the 14th century.

In particular, the early series of outbreaks, known as the Justinian Plague after the Byzantine Emperor who was reigning when it appeared, may have been instrumental in weakening the Byzantine Empire (i.e. the Eastern Roman Empire) in advance of its collapse at the hands of an expanding Arab Islamic Empire, particularly from 632 CE to 655 CE, when it lost all of its territory except Asia Minor (a.k.a. Turkey).


After the initial reconstruction of the complete medieval genome of Y[ersnia] pestis from a Black Death [ (1347 -- 1351)] cemetery in London last year, the researchers from the University of Tuebingen used a published genome wide dataset from more than 300 modern Y.pestis strains to reconstruct the relationship of ancient and modern plague bacteria. Due to the well-established age of the ancient remains they were able to date major radiation events in the history of this pathogen that are likely linked to major pandemics in the human population.

The comparison of modern and ancient genomes revealed that of the 311 Y.pestis strains analyzed, 275 trace their ancestry back to the medieval Black Death pandemic in the mid of the 14th century, confirming a previous analysis of 21 complete plague genomes by the same authors in 2011. In the new larger dataset, however, the authors identified an additional cluster of 11 contemporary bacterial strains that branch in the Y.pestis phylogeny between the 7th and 10th centuries, thus suggesting a radiation event of Y.pestis bacteria during a major outbreak. This time period roughly coincides with the Justinian plague, which historical sources suggest took place between the 6th and 8th centuries AD.

The new study apparently examines the issue by looking at the internal evidence from Black Plague DNA of an earlier outbreak based on a common origin of the different phylogenies present in the 14th century C.E. that started to diverge from each other at that point.  The illustration from the paper below summarizes this analysis. 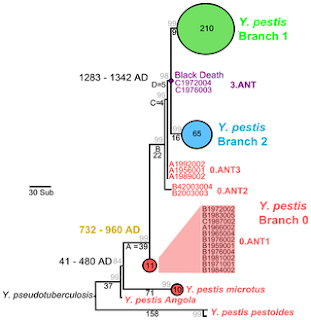 As the authors of the new open access paper explain:

Based on similarity in mortality levels, geographic distribution, and recorded symptoms, historians have long suspected that the Plague of Justinian (542–740 AD) might have been caused by the same infectious agent as that responsible for the 14th-century Black Death [5]. Since several publications have implicated Y. pestis as the principal cause of the Black Death by phylogenetic assignment and evaluation of DNA quality [1], [6], [7], the possibility that the Plague of Justinian may have been responsible for the deep cluster we observe here carries some legitimacy. This is further supported by the placement of the cluster approximately half the distance between the Black Death (1283–1342 AD) and the ancestral rodent strain Y. pestis microtus, which is suspected to have diverged from the soil-dwelling Y. pseudotuberculosis root approximately 2000 years ago (41–480 AD). Our cursory dating analysis based on relative branch lengths reveals a divergence time of 733–960 AD for this cluster, thus placing it in a phylogenetic position expected for a Y. pestis radiation event roughly coincident with the Plague of Justinian. We regard this as an important observation since a Y. pestis involvement in the plague of Justinian seemed unlikely from our previous whole genome analysis [1]. Confirmation of their potential for human infection via isolation of one of these strains, or an as yet uncharacterised close relative, from an infected patient would be helpful to understand their possible relationship to the plague of Justinian. . .

We acknowledge that the above conclusions have yet to be confirmed via a more robust full genomic comparison of Y. pestis strains, both contemporary and historical. Specifically, Y. pestis data from human mass burials dating to the Justinian era may hold pertinent information to permit a more thorough evaluation of the evolutionary history of this notorious human pathogen.

The references in the quoted part of their discussion are:

Another post of mine noted a study showing that plague outbreaks appear to have had some connection to climate trends, and more generally to the Migration period ca. 400 CE to 800 CE, during which "barbarian" tribes relocated en masse across Europe in the face of adverse climate conditions, that may have played a part in carrying the Black Plague to the Eastern Roman Empire.

The summary of the plague itself that I quoted then stated:


The Plague of Justinian was a pandemic that afflicted the Eastern Roman Empire (Byzantine Empire), including its capital Constantinople, in the years 541–542. . . Modern scholars believe that the plague killed up to 5,000 people per day in Constantinople at the peak of the pandemic. It ultimately killed perhaps 40% of the city's inhabitants. The initial plague went on to destroy up to a quarter of the human population of the eastern Mediterranean. New, frequent waves of the plague continued to strike throughout the 6th, 7th and 8th centuries CE, often more localized and less virulent. It is estimated that the Plague of Justinian killed as many as 100 million people across the world. Some historians such as Josiah C. Russell (1958) have suggested a total European population loss of 50% to 60% between 541 and 700.

After 750, major epidemic diseases would not appear again in Europe until the Black Death of the 14th century.

The number of deaths caused by the Justinian Plague may have been one of the greatest in recorded history together with other major epidemics and floods.

My previous analysis noted the possible important role that plague may have played in weaking the Byzantine Empire as it contended with an era of Arab Muslim expansion (the timing of which was reviewed here as well).  The new study adds credibility to this aspect of the historical narrative of the Justinian Plague.
Posted 4:36 PM
Email ThisBlogThis!Share to TwitterShare to FacebookShare to Pinterest
Labels: climate, Europe, genetics, history, religion