Are Sterile Neutrinos Out There?

On day two of the NeuTel13 conference, the core question was why there is so much tension in the experimental data between experiments tending to show one or two sterile neutrinos of close to 1 eV mass and those not showing any?

There are sub-discovery hints of new physics in the form of a sterile neutrino seen in various anomalies of up to three sigma effects if the relevant experiments are correct.

But, I am inclined to think that Carlo Rubbio and P. Vogel are on the right track in seeing this as probably being due to experimental errors such as inaccurate prior measurements of theta13, instrumental effects at low energies, and inaccurate understandings of the relevant spectra of fissile materials that provide a baseline against which reactor disappearances are inferred, rather tahn new physics.


Joachim Kopp's talk and questions raised during the talk, get to the heart of the matter.


The two main anomalies are those of LSND and MiniBooNE. Both see antineutrino appearance in antineutrinos from muons. MiniBooNE has a low-energy excess that is not understood.  Reactor and gallium experiments have also observed anomalies. Reactor exps. see electron antineutrino fluxes which are 3.5% higher than predictions. The gallium anomaly came from intense radioactive electron neutrino sources, observing a deficit. Also a 3-sigma effect.

From short baseline reactors as a function of the distance one sees a varying set of points lower than expected fluxes. One can fit this in the 3+1 scenario (three active and one sterile neutrino). This produces a measurement of allowed regions of the dm^2_14 vs sin^2(theta_14), which has a best solution at sin^2 theta_14 = 0.10, with a dm^2_14=1.75 eV^2.  Including everything as far as disappearance measurements are concerned (Gallium, Bugey3) one finds a compatible result, with best fit at (0.09,1.78)

. . . For muon neutrino disappearance experiments,the parameter regions favored by the tentative hints are in tension with null results, in the 3+1 scenario. . . .

For electron neutrino appearance searches, the data comes from LSND, MiniBooNE, E776, Karmen, Nomad, and ICARUS most recently. A plot of mixing angle versus mass difference was shown, where the mixing angle is a composite of muon-electron neutrino mixing, sin^2 theta_mu-e. The fit is reasonable in chisquared, and there is a reasonably sized region of parameter space which accommodates all inputs. The data was also analyzed in the 3+2 scenario and in the 1+3+1 scenario. There is significant improvement in the goodness of fit by using the 3+2 scenario.

Putting everything together one can do a global oscillation fit, which shows severe tension between the two sets of experiments. This is not obvious from a simple analysis of the chisquare per degree of freedom: this is due to the fact that many of the inputs have no sensitivity to sterile neutrinos, and dilute the chisquared. If one compares the minimum chisquare from global and separate fits, one sees that there is a p-value at the level of 10^-4.

The conclusion is that the models cannot explain the full sets of data.

Kopp then spoke for a while of sterile neutrinos in cosmology. The constraints come from a sum of neutrino masses below 0.5 eV, and the number of relativistic species, with N>3 slightly preferred. Ways out are a large lepton asymmetry (>0.01) which would lead to a suppressed production. See e.g. hep-ph/9508275, or astro-ph/0608206. Or one could have more than one relativistic degree of freedom, or a coupling to a Majoron field, also leading to suppressed production (hep-ph/0108064).

Also a combined fit of SBL data and cosmology inputs has been tried, see arxiv:1302.6720. The cosmological input comes from Wmap9, plus results from the hubble space telescope and baryon acoustic oscillations. The combination yields a value of m4 in the 1.3 eV range and this is only if the detected number of degrees of freedom N4 is of about a half. The graph below shows the best-fit region in green. 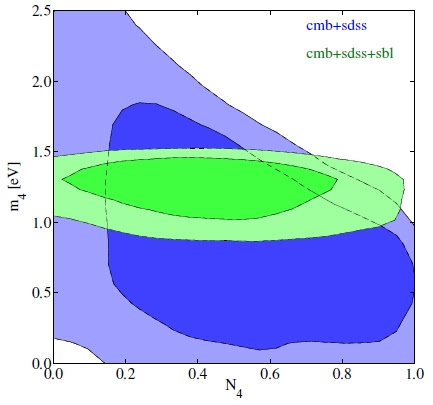 . . . Global fits show severe tension between appearance and disappearance searches; this also leads to different groups getting to slightly different conclusions on the whole picture. Cosmological inputs are strong but they do not add much. . . .

Carlo Rubbia commented that the problem is an experimental one, while the speaker made the implicit assumption that every experiment is right. He mentioned that the disappearance experiments all assume that the spectrum from the reactor material is known and the same. Also the lifetime of the neutron has changed with respect to what was before. So the results cannot be combined as if they were independent. To him the combination is not correct as it is done. The second point he made was about neutrino appearance experiments. The low-energy excess in MiniBooNE is certainly an experimental problem to Rubbia. Icarus has a low-energy peak which is instrumental. So if one uses this result as a genuine result one will certainly reach inconsistent conclusions. Rubbia made the wish that the experimental input is more carefully treated.

A second talk expanded on this debate:


“Do we need a fourth neutrino to explain these results ?” His answer is yes. This is streneghtened by a reevaluation of antineutrino spectrum emitted by reactors, adding the newest knowledge on nuclear databases, including the neutron lifetime which has decreased as determinations have become more accurate.

A reanalysis of the 19 previous experiments at reactors with very short baseline and a treatment of correlations between the various measurement explicitates a overall deficit, with a ratio observed/theoretically predicted flux of R=0.927+-0.023.  Moreover, there is the lingering gallium anomaly: experiments with solar neutrinos, calibrated using radioactive neutrino emitters of low energy, evidence a deficit R=0.75-0.86. Combining reactors and gallium results one gets best values of delta_m^2 in the 1.5-3 eV^2 range.

Then Cribier mentioned the fact that a few days ago a preprint appeared in the arxiv (1303.0900v1) where P.Vogel et al. reanalyze the 19 SBL reactor antineutrinos adding a value of sin^2(2 theta_13)=0.089+-0.011, and they get a much reduced anomaly, with a ratio R=0.959+-0.009 +-0.027, which is just a 1.4-sigma effect. The Saclay group quickly tried to ascertain the result and has many questions. They reanalyzed the same way the data, but they still find a three-sigma deficit of neutrinos. So this disagreement remains in these latest results.

An intriguing result at the ILL reactor in Grenoble, taking data at 9 meters distance. A reevaluation in 1990 by 9.5% of the reactor power shows that the deficit in the 1980 data is evident and one can also fit the energy spectrum, with a dm^2 value of 2.3 eV^2, very close to what we agree to now.


The speaker summarized that the reactor anomaly is a 6-7% effect. A fourth of that effect stems from the neutron lifetime. Another quarter from non-equilibrium corrections, which depends on detailed fuel history, and well-understood nuclear physics. Half, though stems from the new fluxes. If we want to work on that problem we need to improve the beta spectra for all four fissile isotopes. 25x statistics is required, while energy resolution at 50 keV is sufficient.

Almost a dozen experiments have been proposed to search for sterile neutrinos with masses on the order of one eV (or rule out their existence).  Most of the talks today are about those proposed experiments.

Luca Stanco, before launching into one of those proposals with an emphasis on making sure that any new experiment is sufficient to definitively resolve the sterile neutrino question, summed up the agenda for neutrino physics researchers:


The Higgs is where one expected it, and there seems to be nothing beyond the SM in that sector. So neutrinos are the place where to commit oneself to looking for new physics. . .

Which measurements can be done with neutrinos: three angles, two mass differences, the sign of the mass difference, one cp phase, the source of atmospheric oscillations, the absolute mass scale, and a solution of the issue of whether neutrinos are Dirac or Majorana particles. The last question is: are there more non-standard neutrinos ? . . .

Neutrino oscillations have established a beautiful picture, but anomalies appear in neutrino data in the region of dm^2 of the eV^2 scale. This predominantly comes from single detector experiments. Luca’s personal conclusion on the LSND effect is that MiniBooNE spent ten years, money, work, and was inconclusive. So one should be careful to avoid this kind of situation in the future.

The RENO talk from yesterday can be summed up with the conclusion that sine^2(2theta_13) is 0.100 +/- 0.010 (stat.) +/- 0.015 (sys.).  This is well in line with the other measurements of this parameter at similar levels of experimental uncertainty.  The confirmation improves the confidence we can have in the other measurements of this PMNS matrix parameter.
Posted 8:39 AM
Email ThisBlogThis!Share to TwitterShare to FacebookShare to Pinterest
Labels: dark matter, experimental BSM data, neutrinos, physics, predictions, science