Matt Strassler summarizes the extent to which the current LHC data exclude a broad class of "natural supersymmetry" theories (from a recent paper of which he is a co-author).  These are operationally defined as theories with a Higgsino of 400 GeV or less, and gluino decays of one of three theoretically preferred types.  (The post does not really explain why this operational definition is appropriate, but I respect his judgment on this score.) But, it is a much less constrained search than a test limited only to, for example, the Minimal Supersymmetric Model or something similar. 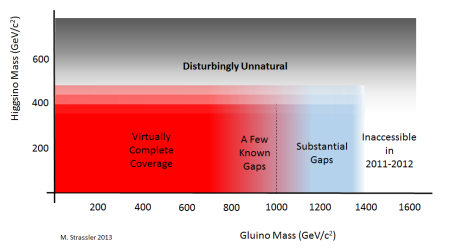 The extent to which such theories are disfavored as a function of gluino mass is displayed above.

This certainly doesn't exclude all SUSY theories, but since a more "natural" theory has been a long stated purpose for considering SUSY theories in lieu of the Standard Model, an "unnatural" SUSY theory is decidedly less interesting.

His analysis is largely limited to exclusions based on direct searches at the LHC and does not really integrate exclusions arising from electric dipole and magnetic moments of charged leptons, neutrinoless double beta decay, direct dark matter detection experiments, etc.

Similarly, he doesn't consider more speculative limitations like the tendency of heavier particles to decay more quickly which would give rise to decays that happen much more quickly than the known lifetime of the W boson that facilitates those decays without a well established mechanism for doing so.

His previous posts have made a key point, not emphasized in the current post, which is that one of the reasons that supersymmetry is attractive is that it is one of the few classes of modifications of the Standard Model that can simultaneously fit the data and make a major modification to the Standard Model at all.  Ruling out SUSY clears most of the decks of theory space of any meaningful Standard Model alternatives.  In particular, SUSY is a component of essentially all versions of string theory.  Ruling out natural SUSY also means ruling out natural string theory.
Posted 10:46 AM
Email ThisBlogThis!Share to TwitterShare to FacebookShare to Pinterest
Labels: experimental BSM data, physics

@ Andrew, "His analysis is largely limited to exclusions based on direct searches at the LHC and does not really integrate exclusions arising from electric dipole and magnetic moments of charged leptons, neutrinoless double beta decay, direct dark matter detection experiments, etc."


Good for you, Andrew.

Matt’s blog is obvious grossly misleading. His problem goes beyond of ignoring the other *set* of very important data. This is an issue of epistemology, the paradigm. But, his view will soon become the minority, see the comment at http://www.quantumdiaries.org/2013/12/06/paradigm-shift/#comment-163211

Matt's blog is cautious but not grossly misleading and presents a point of view that is pretty representative of mainstream HEP thought.

I don't think that writing a paper that establishes some exclusions based on a finite set of data without fully integrating every possible argument for the same or a strong conclusion is misleading.

As Voltaire said, "The best is the enemy of the good."

Matt's paper actually makes generalizations about a broad subclass of SUSY theories much more boldly than any previous paper I've seen incorporating the latest LHC data, which is where the experimental action is now. His paper makes a valuable contribution to the efforts of anyone else seeking to make a more multidisciplinary analysis incorporating the kinds of additional line of evidence that I suggest.