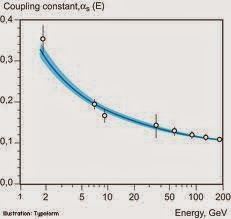 The data points confirming that the running of the strong force coupling constant (which is a dimensionless quantity) matches its Standard Model beta function for energies from 2 GeV to 200 GeV is illustrated above.  It is customary to quote the strength of this force at the 91 GeV energy scale corresponding to the mass of the Z boson.

There are many ways that 1/9 could be relevant to QCD.  There are three kinds of color charge, it is the produce of an SU(3) group, there are three generation of quarks, etc.

The fine structure constant (i.e. the coupling constant of the electromagnetic force), meanwhile, might be a factor generally applicable to a force carried by a zero mass vector boson, something that photons and gluons have in common.

Another way to derive the strong force coupling constant from first principles would be to observe that its value is approximately equal to 1 at its peak value.  If the value of 1 is exact at this boundary condition, the experimentally measured value of the strong force coupling constant at all other energies is entirely a product of its beta function from the integer value at the boundary.  Unlike the electromagnetic force, however, the strong force does not necessarily peak at zero momentum and distance.  It relaxes, giving rise to asymptotic freedom, at very short ranges, for quarks within hadrons.
Posted 1:51 AM
Email ThisBlogThis!Share to TwitterShare to FacebookShare to Pinterest
Labels: conjectures, physics, QCD