Did The Death Of The Yellow Nile Fragment The Nilo-Saharan Languages? 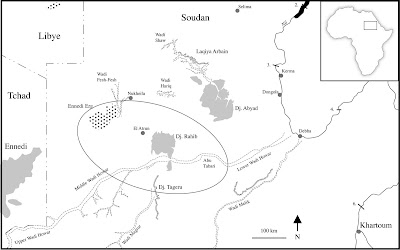 Africa has several groups of indigenous languages. In North Africa and East Africa, the Afro-Asiatic languages have been predominant. In West and Central Africa, the Niger-Congo languages are predominant and one subset of those languages, the Bantu languages, are spoken throughout most of sub-Saharan Africa. Hunter-gatherer groups speak a variety of languages with click phonemes that may or may not have a common origin or genetic relationship to each other called the Khoisan languages.

Finally, many nomadic herders of the Sahel and East Africa speak languages that are part of the Nilo-Saharan language family that includes the indigenous languages of several different ethnic groups in Sudan including the people of Darfur, some Nuba Mountain people, the Nubian people, and many of the people of now independent South Sudan.  The people of Darfur, the Nuba Mountain people (both Nilotic speaking and Niger-Congo Kordofani language family speaking) and the Nilotic people of South Sudan have strong genetic similarities with each other (although the ties are far more attenuated in the Nubian people of Northwest Sudan, and the Sudanese ancestral component is somewhat distinct, although still related to other Nilotic populations).

The history of these languages is intimately connected to the history of one of the greatest rivers that no longer exists, the Yellow Nile, which once rivaled the two main sources of the modern Nile River, the White Nile (which flows more or less due North from Lake Victoria), and the Blue Nile (which flows through Ethiopia to the confluence with White Nile).  As the Yellow Nile (now called Wadi Howar) dried up in the wake of the 4.2 kiloyear climate event and was dealt the final death blow in the climate event that led to the Bronze Age Collapse, the language family spoken up and down the Yellow Nile fragmented into many daughter languages as their civilization collapsed and they were exiled to wander Africa with their herds chasing new sources of water.

A conference paper from 2009 by Dr. Claude Rilly makes the connection.


[W]hen did Proto-NES split into different groups? The earliest attested daughter-language is by far Meroitic. Early scholars thought it appeared in the Nile Valley at the time of the first rulers of Napata, around 850 BCE. However, I have presented elsewhere (Rilly 2007b) evidence that traces of Proto-Meroitic personal names could be found in Egyptian texts dated to the end of the Kingdom of Kerma (ca. 1600 BCE).

In addition, strong elements in favour of the presence of names fitting with the Proto-Meroitic phonology can be found in the Egyptian lists of bewitched enemies from Kerma as early as the 12th Dynasty (ca. 2000 BCE). Therefore a chronological span around the second half of the third millenium BCE for the splitting of the NES-group is by no means exaggerated. The question is now to find what event caused this splitting.

The University of Cologne have conducted in the last decades an ambitious archaeological project (BOS, later ACACIA, cf. Kuper & Kröpelin 2006, Jesse 2004) in the region of the Wadi Howar. This wadi – also called the "Yellow Nile" – is a former tributary of the Nile running from Ennedi range, in Chad, through Darfur and Kordofan and joining the Nile at el-Debba, north of the great bend of the Nile, 100 km south of Kerma, where the first Kushite state was founded around 2500 BCE. As Eastern Sahara underwent desertification, between 5000 and 3500 BCE, the Wadi Howar attracted a numerous population, especially from the North, until its course became disrupted and finally just temporary around the middle of the 2nd millenium BCE. Nowadays, only the Upper Wadi Howar, in Darfur, retains some water at the time of the seasonal rains. The Wadi Howar was densely populated during three millenia, as can be deduced from the 1700 archaeological sites of various size spotted by the Cologne team. The banks of the wadi are surrounded by additional archaeological sites such as Gebel Tageru in the south, Erg Ennedi in the north and Ennedi range in the west.

Three phases of settlement have been determined in the Wadi Howar. From 5000 to 4000 (phase 1), the river is continuously full and its bank harbour settlements of hunter-gatherers, that live also on fish and molluscs. From 4000 to 2200 (phase 2), the Lower Wadi Howar, close to the Nile, gets dry. New settlers, coming from the neighbouring regions where desertification is gaining ground, are now living mainly on cattle. Goats and sheep are introduced at the end of this period. Contacts with the Nile valley are indicated by imported ceramics of the "herringbone" type. From 2200 to 1100 BCE (phase 3), the whole wadi is dry most of the time, with some humid places during the rainy season in the Upper and Middle Wadi Howar. Settlements are still numerous, but more scattered. The main diet is now made of sheep and goats, as cattle is too exacting for an increasingly arid environment. Donkeys, introduced to Sudan from at least 2500 BCE, play a major role in the nomadic way of life of the last settlers. After 1100 BCE, the region becomes hardly hospitable, excepted in the Upper Wadi Howar.

What can be deduced from the history of Proto-NES fits perfectly with these archaeological and palaeoclimatic data. The crystallisation of the proto-language possibly occurred when cattle-tenders settled together along the Wadi Howar around 4000 BCE, whereas the splitting into different linguistic groups would result from the progressive dessication of the river.

The death of the Yellow Nile coincides closely in time with the death of another famous river, the Saravasti River, which is mentioned frequently in the Hindu epic the Rig Veda, and which archaeological evidence indicates was a lifeline for many of the major cities in the Harappan civilization until it went dry.