* Eurogenes reports on a new (closed access) paper in Nature Genetics documenting a number of punctuated expansions of Y-DNA lineages including R1a-Z93 taking place ca. 2500 BCE to 2000 BCE in South Asia, which is commonly associated with Indo-Aryan expansion.  Ancient DNA argues for a steppe rather than South Asian origin for this Y-DNA lineage near a strong candidate for the Proto-Indo-European Urheimat.

Holocene expansions of Y-DNA H1-M52 (particularly common among the Kalash people of Pakistan) and L-M11 in South Asia are also discussed (incidentally L-M11 is also common among the Kalash people, which makes them plausible candidates for a Harappan substrate in this genetically unique and linguistically Indo-Aryan population).  See also a nice table from a 2003 article on South Asian genetics showing frequencies of both H1-M52 and L-M11 in various populations. 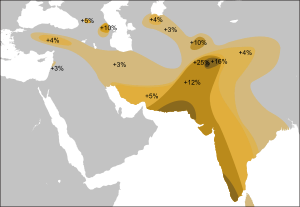 Locus M-11 is one of several defining loci for L-M20 whose geographic range is illustrated in the map above from the L-M20 wikipedia article which is linked above.


Naively, H1-M52 and L-M11 both look to me like pre-Indo-Aryan Harappan expansions.

Also, honestly, the distribution of H1-M52 is probably a better fit to the Dravidian linguistic range than L-M76.

* Dienekes' Anthropology blog catches another controversial conclusion of the paper, that Y-DNA E originated outside Africa.

We saw a notable increase in the number of lineages outside Africa ~50–55 kya, perhaps reflecting the geographical expansion and differentiation of Eurasian populations as they settled the vast expanse of these continents. Consistent with previous proposals, a parsimonious interpretation of the phylogeny is that the predominant African haplogroup, haplogroup E, arose outside the continent. This model of geographical segregation within the CT clade requires just one continental haplogroup exchange (E to Africa), rather than three (D, C, and F out of Africa). Furthermore, the timing of this putative return to Africa—between the emergence of haplogroup E and its differentiation within Africa by 58 kya—is consistent with proposals, based on non–Y chromosome data, of abundant gene flow between Africa and nearby regions of Asia 50–80 kya.

I can't say I'm strongly persuaded, although there might be some merit in the details of the TMRCA analysis.

The CT clade breaks into a DE clade and a CF clade.  So, you can have a CF clade (providing the predominant source of Eurasian Y-DNA) and a D clade (providing a minor source of Eurasian Y-DNA with a quirky distribution with concentrations in the Andaman Islands, Tibet, Japan, and to a lesser extent Siberia and the region between the Andaman Islands and Tibet).  In my view, the quirky distribution of Y-DNA D is consistent with a separate wave of migration, probably thousands of years after the CF expansion, and not with a single CT expansion where parsimony is served by a single unified wave of expansion.

Basal Y-DNA DE is found in both West Africa and Tibet, not strongly favoring either side of the debate.  Y-DNA E in Europe shows a clear African source.

* Razib captures better that larger scope of the paper and attempts to puts it in the context of cultural evolution. Apart from his association of the R1b expansion with Indo-Europeans, and his largely tongue in cheek suggestion of a Levantine origin for modern humans, I think he's basically on the right track.

Looking closely at the data after reading his piece, I am inclined to think that climate events ca. 2000 BCE and 1200 BCE caused Y-DNA expansions in Europe and South Asia to be much more intense than elsewhere in Asia where climate shocks may have been less intense (in Africa, E1b may have arisen from the simultaneous arrival of farming, herding and metalworking, rather than a phased appearance as elsewhere, made possible only once the food production technologies could bridge the equatorial jungle areas of Africa).

* Meanwhile and off topic, Bernard takes a good look at papers proposing a Northern route for the initial migration of mtDNA M and N. I've been aware of these papers for several weeks now, but have not had a chance to really digest these paradigm shifting proposals before discussing them, and I probably won't get a chance for a while yet to come.
Posted 6:19 PM
Email ThisBlogThis!Share to TwitterShare to FacebookShare to Pinterest
Labels: blogs, genetics, history, language, South Asia

"In my view, the quirky distribution of Y-DNA D is consistent with a separate wave of migration, probably thousands of years after the CF expansion, and not with a single CT expansion where parsimony is served by a single unified wave of expansion".

D's distribution is not so 'quirky' if you accept the later comment you made:

"Bernard takes a good look at papers proposing a Northern route for the initial migration of mtDNA M and N".

Both papers explain the broken mt-DNA distribution as being a product of climate deterioration through Central Asia leading to human extinction in that region. What is so for mt-DNA would also be true for Y-DNA. I agree with Dienekes' commnet:

"This model of geographical segregation within the CT clade requires just one continental haplogroup exchange (E to Africa), rather than three (D, C, and F out of Africa)".

In fact I strongly suspect that CT had already dispersed quite widely before the CF/DE split, and spread even more widely by the C/F and D/E splits. They had each come to dominate the Y-DNA haplotype variation in four separate regions within the original CT geographic distribution. Two branches had become confined to the Far East (C and D) while two had become confined to the western end of the CT distribution (F and E).

The distribution of Y-DNA along with the absence of detectible Denisovian admixture in either Andamanese or the Japanese (admittedly it is present in Tibetans), disfavors Y-DNA D as a first wave migration. It could very well be a northern route migration. But, there is just not any good reason to think that its dispersal was contemporaneous with Y-DNA CF.