A Short History Of Nuclear Binding Energy And The Nuclear Force

In the Standard Model of particle physics, the nuclear binding energy that binds protons and neutrons into atoms arises as a spillover from the strong force that binds quarks together into hadrons via an exchange of gluons according to the rules of quantum chromodynamics (QCD) and is mediated mostly via pions, rho mesons, and omega mesons exchanged between protons and neutrons in the nucleus of an atom. 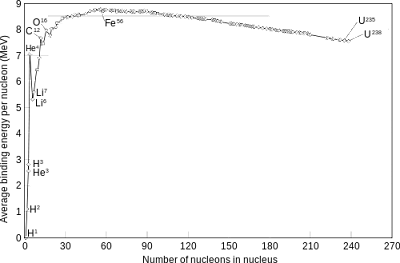 The nuclear binding energy of atoms in real life is summarized in the chart above.

where the coefficients are given by:

is called the saturation contribution and ensures that the binding energy per nucleon is the same for all nuclei to a first approximation. The term

is a surface tension effect and is proportional to the number of nucleons that are situated on the nuclear surface; it is largest for light nuclei. The term

is the Coulomb electrostatic repulsion; this becomes more important as

takes into account the fact that in the absence of other effects the most stable arrangement has equal numbers of protons and neutrons; this is because the n-p interaction in a nucleus is stronger than either the n-n or p-p interaction. The pairing term

is purely empirical; it is + for even-even nuclei and - for odd-odd nuclei.


According to Wikipedia the formula: "gives a good approximation for atomic masses and several other effects, but does not explain the appearance of magic numbers of protons and neutrons, and the extra binding-energy and measure of stability that are associated with these numbers of nucleons. . . . The semi-empirical mass formula provides a good fit to heavier nuclei, and a poor fit to very light nuclei, especially 4He. This is because the formula does not consider the internal shell structure of the nucleus. For light nuclei, it is usually better to use a model that takes this structure into account."
Magic Numbers

What are the magic numbers (again per Wikipedia)?


In nuclear physics, a magic number is a number of nucleons (either protons or neutrons, separately) such that they are arranged into complete shells within the atomic nucleus. The seven most widely recognized magic numbers as of 2007 are 2, 8, 20, 28, 50, 82, and 126. Atomic nuclei consisting of such a magic number of nucleons have a higher average binding energy per nucleon than one would expect based upon predictions such as the semi-empirical mass formula and are hence more stable against nuclear decay.

The unusual stability of isotopes having magic numbers means that transuranium elements can be created with extremely large nuclei and yet not be subject to the extremely rapid radioactive decay normally associated with high atomic numbers.

Nuclei which have neutron number and proton (atomic) numbers each equal to one of the magic numbers are called "double magic", and are especially stable against decay. Examples of double magic isotopes include helium-4, oxygen-16, calcium-40, calcium-48, nickel-48, nickel-78, and lead-208.

Double-magic effects may allow existence of stable isotopes which otherwise would not have been expected. An example is calcium-40, with 20 neutrons and 20 protons, which is the heaviest stable isotope made of the same number of protons and neutrons. Both calcium-48 and nickel-48 are double magic because calcium-48 has 20 protons and 28 neutrons while nickel-48 has 28 protons and 20 neutrons. Calcium-48 is very neutron-rich for such a light element, but like calcium-40, it is made stable by being double magic. Nickel-48, discovered in 1999, is the most proton-rich isotope known beyond helium-3. At the other extreme, nickel-78 is also doubly magical, with 28 protons and 50 neutrons, a ratio observed only in much heavier elements apart from tritiumwith one proton and two neutrons (Ni-78: 28/50 = 0.56; U-238: 92/146 = 0.63).

Magic number shell effects are seen in ordinary abundances of elements: helium-4 is among the most abundant (and stable) nuclei in the universe and lead-208 is the heaviest stable nuclide.

Magic effects can keep unstable nuclides from decaying as rapidly as would otherwise be expected. For example, the nuclides tin-100 and tin-132 are examples of doubly magic isotopes of tin that are unstable, and represent endpoints beyond which stability drops off rapidly.

The nuclear shell model forms the basis of the "magic number" determination.

Nuclear binding energy arises from the nuclear force a.ka. the residual strong force. The neutral rho meson plays a part together with pions (pseudoscalar mesons made of up and down quarks), charged rho mesons (made up up and antidown or antiup and down quarks), and omega mesons (vector mesons that combine the components of the neutral rho meson in a different way) in carrying the nuclear force (a.k.a. residual strong force a.k.a. strong nuclear force), not to be confused with the gluon mediated strong interaction of QCD from which it derives residually, that gives rise to nuclear binding energy within atoms. Per Wikipedia:

The nuclear force is powerfully attractive between nucleons at distances of about 1 femtometer (fm, or 1.0 × 10−15 metres) between their centers, but rapidly decreases to insignificance at distances beyond about 2.5 fm. At distances less than 0.7 fm, the nuclear force becomes repulsive. This repulsive component is responsible for the physical size of nuclei, since the nucleons can come no closer than the force allows. By comparison, the size of an atom, measured in angstroms (Å, or 1.0 × 10−10 m), is five orders of magnitude larger. The nuclear force is not simple, however, since it depends on the nucleon spins, has a tensor component, and may depend on the relative momentum of the nucleons. 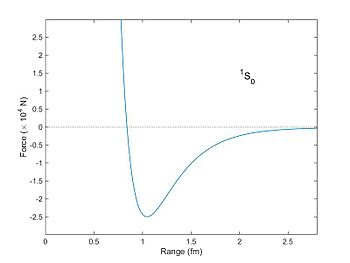 where g is a magnitude scaling constant, i.e., the amplitude of potential,

is the Yukawa particle mass, r is the radial distance to the particle. The potential is monotone increasing, implying that the force is always attractive. The constants are determined empirically. The Yukawa potential depends only on the distance between particles, r, hence it models a central force. . . .

To disassemble a nucleus into unbound protons and neutrons requires work against the nuclear force. Conversely, energy is released when a nucleus is created from free nucleons or other nuclei: the nuclear binding energy. Because of mass–energy equivalence (i.e. Einstein's famous formula E = mc2), releasing this energy causes the mass of the nucleus to be lower than the total mass of the individual nucleons, leading to the so-called "mass defect".

The nuclear force is nearly independent of whether the nucleons are neutrons or protons. This property is called charge independence. The force depends on whether the spins of the nucleons are parallel or antiparallel, as it has a non-central or tensor component. This part of the force does not conserve orbital angular momentum, which under the action of central forces is conserved.

The symmetry resulting in the strong force, proposed by Werner Heisenberg, is that protons and neutrons are identical in every respect, other than their charge. This is not completely true, because neutrons are a tiny bit heavier, but it is an approximate symmetry. Protons and neutrons are therefore viewed as the same particle, but with different isospin quantum number. The strong force is invariant under SU(2) transformations, just as are particles with intrinsic spin. Isospin and intrinsic spin are related under this SU(2) symmetry group. There are only strong attractions when the total isospin is 0, which is confirmed by experiment.

Our understanding of the nuclear force is obtained by scattering experiments and the binding energy of light nuclei.

The nuclear force is distinct from what historically was known as the weak nuclear force. The weak interaction is one of the four fundamental interactions, and plays a role in such processes as beta decay. The weak force plays no role in the interaction of nucleons, though it is responsible for the decay of neutrons to protons and vice versa.

Another presentation of these concepts can be found here.

A Feynman diagram of a strong proton–neutroninteraction mediated by a neutral pion. Time proceeds from left to right.
Historical Timing


The semi-empirical formula for nuclear binding energy was first formulated in 1935 by German physicist Carl Friedrich von Weizsäcker, and although refinements have been made to the coefficients over the years, the structure of the formula remains the same today.

Magic number shell effects were first noted in 1933, although the idea was largely dropped until it was rediscovered in 1948.

In 1934, Hideki Yukawa made the earliest attempt to explain the nature of the nuclear force. According to his theory, massive bosons (mesons) mediate the interaction between two nucleons. Although, in light of quantum chromodynamics (QCD), meson theory is no longer perceived as fundamental, the meson-exchange concept (where hadrons are treated as elementary particles) continues to represent the best working model for a quantitative NN potential.

Throughout the 1930s a group at Columbia University led by I. I. Rabi developed magnetic resonance techniques to determine the magnetic moments of nuclei. These measurements led to the discovery in 1939 that the deuteron also possessed an electric quadrupole moment. This electrical property of the deuteron had been interfering with the measurements by the Rabi group. The deuteron, composed of a proton and a neutron, is one of the simplest nuclear systems. The discovery meant that the physical shape of the deuteron was not symmetric, which provided valuable insight into the nature of the nuclear force binding nucleons. In particular, the result showed that the nuclear force was not a central force, but had a tensor character. Hans Bethe identified the discovery of the deuteron's quadrupole moment as one of the important events during the formative years of nuclear physics.

Historically, the task of describing the nuclear force phenomenologically was formidable. The first semi-empirical quantitative models came in the mid-1950s, such as the Woods–Saxon potential(1954). There was substantial progress in experiment and theory related to the nuclear force in the 1960s and 1970s. One influential model was the Reid potential (1968). In recent years, experimenters have concentrated on the subtleties of the nuclear force, such as its charge dependence, the precise value of the πNN coupling constant, improved phase shift analysis, high-precision NN data, high-precision NN potentials, NN scattering at intermediate and high energies, and attempts to derive the nuclear force from QCD.

By comparison, the muon was discovered (it was a surprise and not predicted when it was discovered) in 1936, and the discovery was confirmed in 1937, although it was originally believed to be the pion, a meson predicted by Hideki Yukawa in 1934, which was not discovered until 1947.

Kaons, the first particles discovered with the property of "strangeness" (i.e. a strange quark component) were first discovered in 1947 and elucidate further through 1955, although the way that these mesons fit into the larger picture was not ascertained until the quark model was proposed in 1964.

More of the history of nuclear mass measurements and evaluation can be found in this 2006 paper.
Posted 2:13 PM
Email ThisBlogThis!Share to TwitterShare to FacebookShare to Pinterest
Labels: intellectual history, Standard Model physics