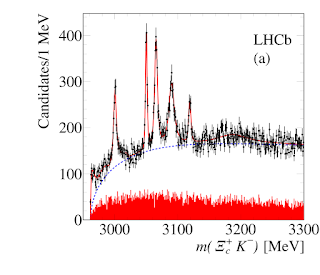 Lubos Motl manages to muse poetic on the observation of five new excited neutral charmed omega baryon resonances at the LHCb experiment. I saw the paper when the pre-print was released earlier this week, and swiftly moved past it with a ho-hum. But, sometimes the most powerful stories are in the telling and not the conclusion, and Motl tells it well. (TD at Quantum Diaries Survivor tells much the same story.)

These particles should exist in the Standard Model and are predicted by QCD. They don't shake any of the known laws of physics.

The results will end up as official data points at the Particle Data Group's catalogue of experimental observations of hadrons (only the ground state and one lighter excited state of neutral charmed omega baryon had been observed until now) which are comparable to the long dull pages of data points in tables in the CRC Handbook of Chemistry and Physics about atoms and molecules. And, this will have value as long as it is easier to put data points in a table based upon experiments than it is to do the calculations from first principles needed to determine those values. (The stories linked to in the latest post at 4Gravitons gives us an inkling of hope that this might not always be the case for evermore, because research that would dramatically simplify QCD calculations if successful is continuing in earnest and making progress.)

The fact that there are five over a 119 MeV mass range is interesting for folks who don't have an intuition about how crowded the hadron mass spectrum is. The narrowness of the peaks in the chart reproduced above, called a "narrow width" means that they decay relatively slowly relative to particles with greater width. (They are still highly unstable, however, lasting only for a tiny fraction of a second.)

The naming conventions for hadrons like these is indeed unnaturally awkward.

Also, while this is less of a big deal than it was in the early days of particle physics when people thought that all the new particles were fundamental, observing five new resonances for the first time in one experimental run is still better than par for the course in this field. It is certainly worth the self-congratulatory tweet from the lab that brought this to his attention.