These final results from the Planck mission are likely to be the definitive Cosmic Microwave Background (CMB) measurements for the foreseeable future.

We present cosmological parameter results from the final full-mission Planck measurements of the CMB anisotropies.

We find good consistency with the standard spatially-flat 6-parameter CDM cosmology having a power-law spectrum of adiabatic scalar perturbations (denoted "base CDM" in this paper), from polarization, temperature, and lensing, separately and in combination. A combined analysis gives dark matter density , baryon density , scalar spectral index , and optical depth  (in this abstract we quote confidence regions on measured parameters and  on upper limits). The angular acoustic scale is measured to  precision, with . These results are only weakly dependent on the cosmological model and remain stable, with somewhat increased errors, in many commonly considered extensions.

Assuming the base-CDM cosmology, the inferred late-Universe parameters are: Hubble constant km/s/Mpc; matter density parameter ; and matter fluctuation amplitude . We find no compelling evidence for extensions to the base-CDM model.

Combining with BAO we constrain the effective extra relativistic degrees of freedom to be , and the neutrino mass is tightly constrained to eV.

The CMB spectra continue to prefer higher lensing amplitudes than predicted in base -CDM at over , which pulls some parameters that affect the lensing amplitude away from the base-CDM model; however, this is not supported by the lensing reconstruction or (in models that also change the background geometry) BAO data.

The joint constraint with BAO measurements on spatial curvature is consistent with a flat universe, ΩK = 0.001±0.002. Also combining with Type Ia supernovae (SNe), the dark-energy equation of state parameter is measured to be w0 = −1.03 ± 0.03, consistent with a cosmological constant. We find no evidence for deviations from a purely power-law primordial spectrum, and combining with data from BAO, BICEP2, and Keck Array data, we place a limit on the tensor-to-scalar ratio r0.002 < 0.07.

Standard big-bang nucleosynthesis predictions for the helium and deuterium abundances for the base-ΛCDM cosmology are in excellent agreement with observations. The Planck base-ΛCDM results are in good agreement with BAO, SNe, and some galaxy lensing observations, but in slight tension with the Dark Energy Survey’s combined-probe results including galaxy clustering (which prefers lower fluctuation amplitudes or matter density parameters), and in significant, 3.6σ, tension with local measurements of the Hubble constant (which prefer a higher value). Simple model extensions that can partially resolve these tensions are not favoured by the Planck data.

The body text notes that:


The normal hierarchy, in which the lowest two mass eigenstates have the smallest mass splitting, can give any P mν >∼ 0.06 eV; an inverted hierarchy, in which the two most massive eigenstates have the smallest mass separation, requires P mν >∼ 0.1 eV. A constraint that P mν < 0.1 eV would therefore rule out the inverted hierarchy. . . . This is consistent with constraints from neutrino laboratory experiments which also slightly prefer the normal hierarchy at 2–3σ[.]

Cosmological Inflation and the Topology of the Universe

The scalar spectral index value of ns=0.965±0.004 (which corresponds to the vertical yellow lines in the figure below) and the tensor-scalar ratio of less than 0.064 tightly constraints the parameter space of cosmological inflation theories. Basically, the parameter space allowed by the latest observations corresponds to the dark blue hump in the bottom center of the figure below.

Earlier Planck results combined with other data indicated that the best fit tensor-scalar ratio is zero (i.e. no primordial gravitational waves (i.e. at the very bottom center boundary of the figure below) and a one sigma value from the best fit value is probably 0.032 or less. 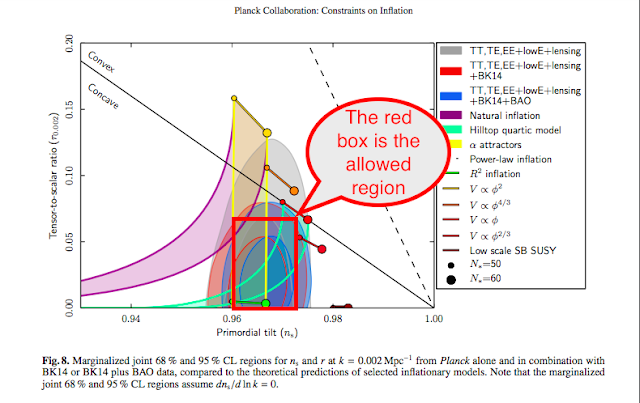 The constraint that the universe is flat is also very strong. The body text states that "our Universe is spatially flat to a 1σ accuracy of 0.2 %."

A separate final Planck result paper on cosmological inflation says this in its abstract:

We report on the implications for cosmic inflation of the 2018 Release of the Planck CMB anisotropy measurements. The results are fully consistent with the two previous Planck cosmological releases, but have smaller uncertainties thanks to improvements in the characterization of polarization at low and high multipoles. Planck temperature, polarization, and lensing data determine the spectral index of scalar perturbations to be  at 68% CL and show no evidence for a scale dependence of  Spatial flatness is confirmed at a precision of 0.4% at 95% CL with the combination with BAO data. The Planck 95% CL upper limit on the tensor-to-scalar ratio, , is further tightened by combining with the BICEP2/Keck Array BK14 data to obtain .

In the framework of single-field inflationary models with Einstein gravity, these results imply that: (a) slow-roll models with a concave potential,   are increasingly favoured by the data; and (b) two different methods for reconstructing the inflaton potential find no evidence for dynamics beyond slow roll. Non-parametric reconstructions of the primordial power spectrum consistently confirm a pure power law. A complementary analysis also finds no evidence for theoretically motivated parameterized features in the Planck power spectrum, a result further strengthened for certain oscillatory models by a new combined analysis that includes Planck bispectrum data. The new Planck polarization data provide a stringent test of the adiabaticity of the initial conditions. The polarization data also provide improved constraints on inflationary models that predict a small statistically anisotropic quadrupolar modulation of the primordial fluctuations. However, the polarization data do not confirm physical models for a scale-dependent dipolar modulation.

– There are several mechanisms which could lower the predictions for the tensor-to-scalar ratio for a given potential V(φ) in single-field inflationary models. Important examples are a subluminal inflaton speed of sound due to a nonstandard kinetic term (Garriga & Mukhanov 1999), a nonminimal coupling to gravity (Spokoiny 1984; Lucchin et al. 1986; Salopek et al. 1989; Fakir & Unruh 1990), or an additional damping term for the inflaton due to dissipation in other degrees of freedom, as in warm inflation (Berera 1995; Bastero-Gil et al. 2016). In the following we report on the constraints for a non-minimal coupling to gravity of the type F(φ)R with F(φ) = M2 Pl + ξφ2 . To be more specific, a quartic potential, which would be excluded at high statistical significance for a minimally-coupled scalar inflaton as seen from Table 5, can be reconciled with Planck and BK14 data for ξ > 0: we obtain a 95 % CL lower limit log10 ξ > −1.6 with ln B = −1.6.

– Within the class of hilltop inflationary models (Boubekeur & Lyth 2005) we find that a quartic potential provides a better fit than a quadratic one. In the quartic case we find the 95 % CL lower limit log10(µ2/MPl) > 1.1.

conclusion: Observations of the Early Universe Reaffirm the Existence of Dark Matter and Dark Energy

Is Time Running Out On Dark Matter?
Forbes-10 hours ago
Time may be running out on the search for the cosmos' exotic dark matter. Decades after the first searches for dark matter's hypothetical exotic ...

Is Dark Matter Real?
Scientific American-Jul 17, 2018
Astrophysicists have piled up observations that are difficult to explain with dark matter. It is time to consider that there may be more to gravity than Einstein taught .

There is no doubt that there are beyond conventional GR phenomena that are giving rise to the observations attributed to dark matter and dark energy.

The paper itself is a bit schizophrenic. It actually clearly states that no explanation other than the cosmological constant, which is part of the formula for gravity in GR (i.e. a gravity modification) and not a substance, is necessary to explain dark energy phenomena, while simultaneously assigning a 69% proportion of the total mass-energy in the universe to dark energy.

Part of the issue with lambdaCDM and dark matter is that dark matter as assumed does work to explain very large scale phenomena. But, it could easily be the case that modifications to gravity that replicate what looks like a dark matter effect at galactic scales also replicate what looks like dark matter effects at very large scales. Indeed, that would be a pretty good null hypothesis. The big problem with dark matter, of course, is that is does a poor job of explaining galaxy level phenomena relative to modified gravity and lots of candidates that fit the CDM definition have been ruled out.

true, but then there's the third acoustic peak in the CMB and inferred mass from gravitational lensing which can be easily explained in terms of dark matter.

The notion is that if there is a gravitational modification that mimic some results of DM, it probably also closely mimics other features of dark matter.

This is absolutely the case with regard to inferred mass from gravitational lensing, for which mass cannot be inferred in such a straight forward matter from lensing because modified gravity theories are non-linear in weak fields.

I don't know that anyone has rigorously examined what various gravity modifications imply in terms of the third acoustic peak in CMB for which a non-relativistic toy model MOND is not the appropriate way to test it.

"Predicting the CMB and BAO is complex and model-dependent, involving many parameters. Like for large structure formation, a detailed investigation is beyond the scope of this first investigation. However, one can observe that since the CMB main acoustic peak position depends on the Universe dynamical evolution, its calculation should involve Ω ∗M rather than ΩM: θ 'pΩ∗M/zrec (with zrec ' 1100 the redshift at the recombination time). The resulting θ ' 0.8◦, agrees with observations [12]."