The fuzzy dark matter (FDM) model treats DM as a bosonic field with astrophysically large de Broglie wavelength. A striking feature of this model is fluctuations in the dark matter density on time scales which are shorter than the gravitational timescale. Including for the first time the effect of core oscillations, we demonstrate how such fluctuations lead to heating of star clusters, and thus an increase in their size over time. From the survival of the old star cluster in Eridanus II we infer  within modelling uncertainty if FDM is to compose all of the DM, and derive constraints on the FDM fraction at lower masses. The subhalo mass function in the Milky Way implies  to successfully form Eridanus II. The window between  is affected by narrow band resonances, and the limited applicability of the diffusion approximation. Some of this window may be consistent with observations of Eridanus II and more detailed investigations are required.


By comparison a graviton from a falling apple near Earth should have energy of 10^-30 ergs. One erg equals 6.242 * 10^11  eV, so a graviton from a falling apple (which is also a boson) ought to have an energy on the other of 6*10^-19 eV which is quite close in order of magnitude to the estimated energy of fuzzy dark matter particles in this study.

For the energy range, a graviton based quantum gravity theory (such as Deur's analysis) and a fuzzy dark matter theory, ought to be very similar.

Meanwhile, another paper purports to rule out John Moffat's MOG theory, which uses a scalar, vector, tensor function, based upon detailed Milky Way observations. Until now, this has been one of the most robust modified gravity theories to date, explaining phenomena where Milgrom's MOND theory fails, such as cluster physics and cosmology data and passing other tests that competing modified gravity theories have failed.

This could be correct, but previous efforts to falsify modified gravity theories have resulted from a misunderstanding of the application of those theories, so it may be premature to rule it out based upon this study alone. A lack of a comparison of the errors observed to the measurement errors and any theoretical errors in the abstract, in particular, is a cause of skepticism of this result.

We perform a test of John Moffat's Modified Gravity theory (MOG) within the Milky Way, adopting the well known "Rotation Curve" method. We use the dynamics of observed tracers within the disk to determine the gravitational potential as a function of galactocentric distance, and compare that with the potential that is expected to be generated by the visible component only (stars and gas) under different "flavors" of the MOG theory, making use of a state-of-the-art setup for both the observed tracers and baryonic morphology. Our analysis shows that in both the original and the modified version (considering a self-consistent evaluation of the Milky Way mass), the theory fails to reproduce the observed rotation curve. We conclude that in none of its present formulation, the MOG theory is able to explain the observed Rotation Curve of the Milky Way.

As the introduction to the pre-print explains:


A dark component of matter has become one of the pillars of current ΛCDM model: it is invoked to explain the mismatch between the observed dynamical mass, and that inferred by observations of the visible component, of astrophysical objects over a large range of mass and spatial scales, from Galaxy Clusters [1–4] to Spiral [5–7] and Dwarf Galaxies [8], including our own, [9], and provides a consistent explanation to the power spectrum of the Cosmic Microwave Background [10], and to the formation of astrophysical structures [11]. Yet, the very nature of this dark matter is currently unknown, and none of the proposed candidates (from stable particles in extensions of the Standard Model, to primordial Black Holes [12, 13]) has been unambiguously detected yet.

An alternative proposal to explain the mismatch observed in the data relies on a modification of the theory of gravity. Several proposals, such as MOND, TeVeS and MOG [14–16], have been able to give an explanation to phenomena around data coming from numerous and diverse sources: motion of globular and galaxy clusters [17–19] and rotation curves of spiral and dwarf galaxies [20, 21].

While some analysis indicate that TeVeS and MOG have difficulties explaining the Bullet cluster data [22] or to reconcile gas profile and strong–lensing measurements in well known cluster systems [23], others claim that MOG can fit both Bullet and the Train Wreck merging clusters [24, 25]. It has been pointed out that the detection of a neutron star merger by the LIGO experiment rules out MOND-like theories [26]. Recent analysis state the former being correct for bi-metric theories such as MOND and TeVeS, but not for MOG [27]. Some of the above controversies are yet to be resolved, so it is currently unclear if MOG phenomenology can offer a solution at all scales.

In this work, we adopt an agnostic approach, and only focus on the prediction of MOG theory on the scale of Spiral Galaxies, with a specific one: our own host. In order to test the predictions of MOG theory within the Milky Way, we use state–of–the–art compilations of kinematical tracers and observationally inferred morphologies, adopted in recent studies of Dark Matter distribution [9, 28, 29], and already used to test MOND phenomenology [30].

They money figures from the MOG paper are as follows: 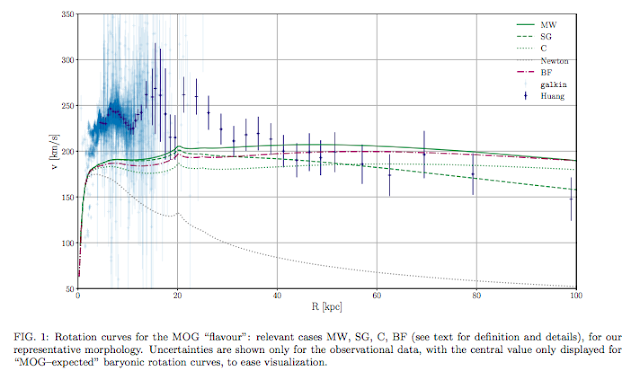 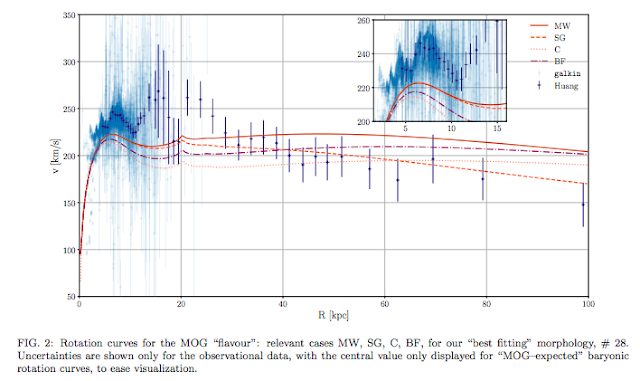 The authors claim a 5 sigma discrepancy, but eyeballing the data, the discrepancies between the SG flavor of MOG and the Milky Way data appear to be statistically significant only in the area where there is a transition from the Newtonian regime to the modified gravity regime at about 15 to 25 kiloparsecs from the central region, although the fit is less strong in closer core than at the edges of the galaxy (something that is also generically true of particle dark matter theories).


A previous paper by some of the same authors about MOND in 2015 (which was ultimately published) was the following, which found that MOND with a simple interpolation function did fit the Milky Way data.

Modified Newtonian dynamics (MOND) is an empirical theory originally proposed to explain the rotation curves of spiral galaxies by modifying the gravitational acceleration, rather than by invoking dark matter. Here,we set constraints on MOND using an up-to-date compilation of kinematic tracers of the Milky Way and a comprehensive collection of morphologies of the baryonic component in the Galaxy. In particular, we find that the so-called "standard" interpolating function cannot explain at the same time the rotation curve of the Milky Way and that of external galaxies for any of the baryonic models studied, while the so-called "simple" interpolating function can for a subset of models. Upcoming astronomical observations will refine our knowledge on the morphology of baryons and will ultimately confirm or rule out the validity of MOND in the Milky Way. We also present constraints on MOND-like theories without making any assumptions on the interpolating function.