The epic poem Beowulf is typically one of the oldest works of literature that school children study (usually in translation to modern English). "Beowulf is by far the longest known Old English poem and – at just over 3,000 lines – preserves about one tenth of surviving English verse from before the Norman Conquest." According to Wikipedia the origins of this story set in Scandinavia in the 6th century CE (with some archaeological corroboration of matters mentioned in the poem) are uncertain:

The date of composition is a matter of contention among scholars; the only certain dating pertains to the manuscript, which was produced between 975 and 1025. . . .

Many suggest that Beowulf was first composed in the 7th century at Rendlesham in East Anglia, that the Sutton Hoo ship-burial also shows close connections with Scandinavia, and that the East Anglian royal dynasty, the Wuffingas, may have been descendants of the Geatish Wulfings. Others have associated this poem with the court of King Alfred the Great or with the court of King Cnut the Great. 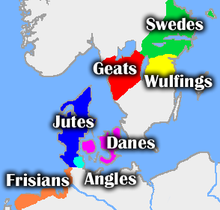 Approximate central regions of tribes mentioned in Beowulf, with the location of the Angles in Angeln. See Scandza for details of Scandinavia's political fragmentation in the 6th century.

The charter reference discussed below suggests that the epic was know well before 931 CE, because this myth must have already been widely known in the 10th century in England since it inspired place name in Wiltshire. 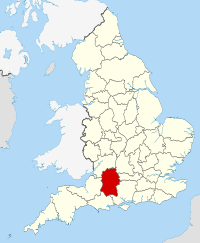 According to a charter written in 931 CE:

This charter is a grant of land in Ham from Æthelstan (d. 939), the first king of England, to his ‘faithful official’ Wulfgar. The amount of land involved is considerable: 9 hides, or roughly the size of 9 Hyde Parks [ed. which is about 350 acres]. In order to be clear about exactly which pieces of land were being transferred, this charter, like many other Anglo-Saxon documents, included a boundary clause in Old English, describing the path you would walk around the edges of the gift.

'First, [go] to the east ... Then westward to the mossy bank. Then down to the hedge/boundary of Beow’s home, eastward to the blackberry thicket. Then to the black pit/cave. Then north by the head to where the short dyke [is]. [Take] out of this one acre, then [go] to the bird’s pond (mere) to the path ... After that to the long meadow. Then to Grendel’s lake (mere). Then to the hidden gate, then back east ...'

Since the landscape includes Beow’s home and Grendel’s lake, it is tempting to think that these names were inspired by the poem Beowulf (although Beowulf is set in Scandinavia, not Wiltshire). At least three other Anglo-Saxon documents mention ‘Grendel’: there is another instance of ‘Grendel’s lake’, there’s a reference to ‘Grendel’s gate’, and one charter has an added boundary clause referring to ‘Grendeles pytte.’

Of course, some people have suggested that these Grendels aren’t ‘Grendels at all, but rather a ‘green delf’ (green quarry) or even Greendales. However, the association with pits and swamps does link these names to some sinister places from Old English literature. Alternatively, a ‘grendel’ could have been a generic term for 'monster', and these 'grendels' could have inspired the poem, and not the other way around. . . .

The charter was witnessed by, among others, two Welsh ‘sub-kings’: Hywel Dda of Deheubarth (d. 949/950) and Idwal Foel of Gwynedd. Hywel was later credited with codifying Welsh law and he may be the only early medieval Welsh ruler who issued surviving coins. He also frequently visited England and even called one of his sons Edwin, an English name (whether out of taste or political expediency). Idwal allegedly died fighting the English in 942. However, he witnessed several of Æthelstan’s charters and there is no evidence he fought against Æthelstan at Brunanburh.

This would have happened at the end of an era, about 135 years before the Norman invasion of England in 1066 CE that gave rise to "Middle English", a successor to Anglo-Saxon "Old English" that was heavily influenced by the Norman French and Latin utilized by the new ruling class. English continues to evolve, however, and starts to become recognizable in the 15th to 16th centuries giving rise to early modern English.

The Archaeological Evidence Related To Beowulf


Like the Illiad whose recount of the Trojan War has been corroborated in part by archaeology from the ancient city of Troy, Beowulf is in a genre that I describe as "legendary history" in which elements of history fact are mixed freely with literary inventions often of a fantastic or supernatural nature, and it isn't always entirely clear when the fact ends and the fiction begins. I would also count much of the Hebrew Bible (i.e. the Old Testament) as belonging to the legendary history genre as well.

There is some archaeological evidence and evidence from other historical documents of some of the matters recounted in Beowulf. Per the Wikipedia entry on Beowulf referenced above:


The poem deals with legends, was composed for entertainment, and does not separate between fictional elements and historic events, such as the raid by King Hygelac into Frisia. Though Beowulf himself is not mentioned in any other Anglo-Saxon manuscript, scholars generally agree that many of the other figures referred to in Beowulf also appear in Scandinavian sources. This concerns not only individuals (e.g., Healfdene, Hroðgar, Halga, Hroðulf, Eadgils and Ohthere), but also clans (e.g., Scyldings, Scylfings and Wulfings) and certain events (e.g., the Battle on the Ice of Lake Vänern).

In Denmark, recent archaeological excavations at Lejre, where Scandinavian tradition located the seat of the Scyldings, i.e., Heorot, have revealed that a hall was built in the mid-6th century, exactly the time period of Beowulf. Three halls, each about 50 metres (160 ft) long, were found during the excavation.

The majority view appears to be that people such as King Hroðgar and the Scyldings in Beowulf are based on historical people from 6th-century Scandinavia. Like the Finnesburg Fragment and several shorter surviving poems, Beowulf has consequently been used as a source of information about Scandinavian figures such as Eadgils and Hygelac, and about continental Germanic figures such as Offa, king of the continental Angles.

19th-century archaeological evidence may confirm elements of the Beowulf story. Eadgils was buried at Uppsala according to Snorri Sturluson. When the western mound was excavated in 1874, the finds showed that a powerful man was buried in a large barrow, c. 575, on a bear skin with two dogs and rich grave offerings. The eastern mound was excavated in 1854, and contained the remains of a woman, or a woman and a young man. The middle barrow has not been excavated.