[H]uman evolutionary models that include archaic admixture in Africa, Asia, and Europe provide a much better description of patterns of genetic diversity across the human genome. We estimate that individuals in two African populations have 6−8% ancestry through admixture from an unidentified archaic population that diverged from the ancestors of modern humans 500 thousand years ago.

The pre-print is here.

At least two prior investigations have reached essentially the same conclusions. The estimated date of admixture is rather recent. We have no really solid clues concerning what archaic populations were involved in Africa. A species ancestral to Neanderthals and Denisovans might be a plausible possibility.

We chose a separate population trio to validate our inference and compare levels of archaic admixture with different representative populations. This second trio consisted of the Luhya in Webuye, Kenya (LWK), Kinh in Ho Chi Minh City, Vietnam (KHV), and British in England and Scotland (GBR). We inferred the KHV and GBR populations to have experienced comparable levels of migration from the putatively Neanderthal branch. However, the LWK population exhibited lower levels of archaic admixture (∼ 6%) in comparison to YRI, suggesting population differences in archaic introgression events within the African continent[.] . . .

We inferred an archaic population to have contributed measurably to Eurasian populations. This branch (putatively Eurasian Neanderthal) split from the branch leading to modern humans between ∼ 470 − 650 thousand years ago, and ∼ 1% of lineages in modern CEU and CHB populations were contributed by this archaic population after the out-of-Africa split. This range of divergence dates compares to previous estimates of the time of divergence between Neanderthals and human populations, estimated at ∼650 kya (Pr¨ufer et al., 2014). The “archaic African” branch split from the modern human branch roughly 460 − 540 kya and contributed ∼ 7.5% to modern YRI in the model[.] . . .

[The] model is augmented by the inclusion of two archaic branches, putatively Neanderthal and an unknown archaic African branch. We inferred that these branches split from the branch leading to modern humans roughly 500 − 700 kya, and contributed migrants until quite recently (∼14 kya). Times reported here assume a generation time of 29 years and are calibrated by the recombination (not mutation) rate[.]

Some of the detailed conclusions are sketchy and buried in jargon and presentations of raw technical statistics.


Previous studies found particular (outlier) African populations to have particularly high levels of archaic admixture. This paper only looks at two very representative samples of modern populations in Africa, and since it looks at only two populations, cannot capture even a large fraction of the linguistic and ethnic diversity found in Africa.

Some of the results are summarized below, although you'll have to refer to the paper to know what the variables whose values are estimated mean. 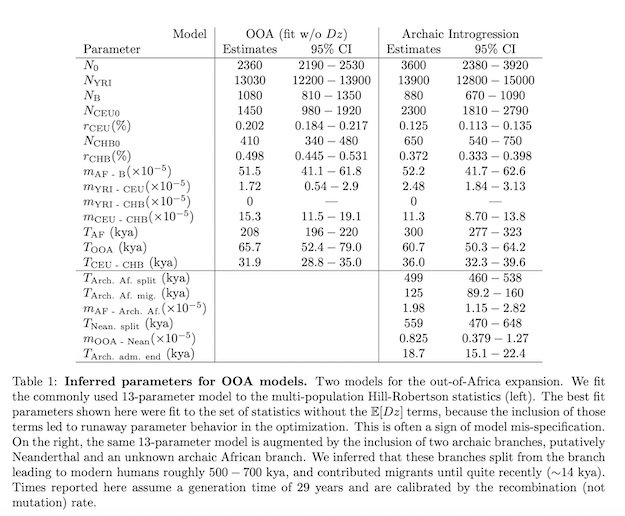 isn't this the death knell of recent african origins, and provides support for a weakened version of multiregionalism?

clearly archaic hominids including h erectus were all interfertile and did mate, one hybrid went on to dominate as h sapiens

There is no evidence of admixture between H. sapiens and H. erectus and it is a fair guess that they would not have been capable of producing fertile offspring. It also has to be recognized that these percentages while not trivial, aren't huge either. The predominant common core of every H. sapiens traces back to a common African core shared by all. And, lots of what was picked up from archaic hominins was ancestry informative but neutral selectively. I wouldn't call that multiregionalism.

@neo Almost surely not. They may be a ghost population but we have multiple samples of their genes and they are too closely related to Neanderthals and modern humans for that to be the case. The estimated time of Denisovan divergence from modern humans is about 1 million years later than the date you would expect with an evolved H. erectus.

do they have DNA from these "evolved H. erectus" to compare it with?

Luhya are modelled as 60% Mende and 40% Dinka by Skoglund et al. If 60% Mende * 8% West African archaic human + 40% Dinka * X then ~4% WAA in Dinka. However, Skoglund et al modelled Yoruba (fig 4F) as 9% Basal Human (assuming this reflect WAA which it might not) and Mende as 13%, so using those proportions Dinka would be zero (actually negative) WAA. In Skoglund et al model WAA did not contribute to Mota either.

So results are consistent with no (or little) West African archaic ancestry in East Africa apart from relatively recent gene flow. Though obviously based on very little.

Evolved H. erectus refers to late populations from the east like Solo Man. Keeping that designation for them doesn't make sense to me either, but there you go.

No we don't have DNA, but anatomically they're quite distinct from Neanderthals and AMHs and appear to have been evolving separately for much longer. There's better candidates for Denisovans in the fossil record anyway (e.g. Dali or Narmada hominins).

so if Denisovans or red dear cave people are h erectus,

doesn't the Dmanisi, Georgia finds show there is tremendous variation in h erectus? had those remains been found in separate locations they'd be designated as different species