A new paper, once again, explains the rise and fall of an empire by looking at shifts in climate that coincide with them. In this case, a severe sixty year drought destroyed the Neo-Assyrian Empire. As the abstract explains:

Northern Iraq was the political and economic center of the Neo-Assyrian Empire (c. 912 to 609 BCE)—the largest and most powerful empire of its time. After more than two centuries of regional dominance, the Neo-Assyrian state plummeted from its zenith (c. 670 BCE) to complete political collapse (c. 615 to 609 BCE). Earlier explanations for the Assyrian collapse focused on the roles of internal politico-economic conflicts, territorial overextension, and military defeat. Here, we present a high-resolution and precisely dated speleothem record of climate change from the Kuna Ba cave in northern Iraq, which suggests that the empire’s rise occurred during a two-centuries-long interval of anomalously wet climate in the context of the past 4000 years, while megadroughts during the early-mid seventh century BCE, as severe as recent droughts in the region but lasting for decades, triggered a decline in Assyria’s agrarian productivity and thus contributed to its eventual political and economic collapse. 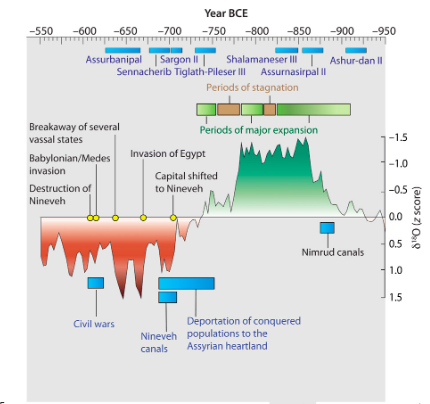 Time counterintuitively flows from right to left in this figure.
It is unusually wet during green years and arid in red ones.

The body text elaborates on the story summed up in the figure above:


The z score transformed values of the detrended record delineating the drier intervals are similar to the values observed during the ~1980–2007 period of our record, the latter coeval with the period of the largest reduction in cool-season precipitation over the northern Iraq and Syria during the past century. The interval between ~850 and 740 BCE emerged as one of the wettest periods of the past 4000 years . . .  representing ~15 to 30% increase in the cool-season precipitation amount (relative to 1980–2007 CE). . . .

This peak wet period, termed here the Assyrian megapluvial, was embedded within nearly two centuries (~925–725 BCE) of pluvial conditions and is synchronous with the prominent phases of the Assyrian imperial expansion (c. 920–730 BCE) within the margin of dating errors of both proxy (~25 years, 1σ) and historical records (~1 year). The age errors associated with the events surrounding the rise and fall of the Assyrian Empire are known with annual and, for many events, at monthly chronological precision.

The [years] between ~800 BCE and ~700 BCE mark the transition from peak pluvial to peak dry conditions.  . . . The interval between ~675–550 BCE . . . emerged as a ~125-year period of peak aridity, termed here the Assyrian megadrought, which is synchronous, within the margins of dating error, with the period of the Assyrian imperial collapse, c. 660–600 BCE. The severity of the Assyrian megadrought is comparable in magnitude to the post-1980 CE drought inferred from our speleothem record—an observation that provides critical context for both historical and modern droughts.

The paper also hints that climate may also be driving contemporary politics in the region, noting early on that:

The core of the Assyrian Empire encompassed a triangular region in northern Iraq defined by the capital cities of Assur in the south (modern Qal’at Sherqat), the seventh century BCE Assyrian capital of Nineveh (modern Mosul) in the north, and Arbela (modern Erbil) in the east.

Mediterranean cyclonic systems in this region provide the bulk of annual precipitation (~90 to 95%) during the cool season (November to April), ranging from 600 to 1000 mm in the north and west to ~200 to 300 mm or less in the south and east.

Today, much of the region that constituted Assyria’s heartland and its hinterland is situated within the high-yield rain-fed cereal agriculture zone lying above the 200- to 300-mm isohyets, referred as a “zone of uncertainty” because interannual variability is typically 40 to 60% and rain-fed cereal cultivation is risky and unsustainable. During years of anomalously high and low rainfall, this agriculturally marginal zone shifts southward and northward by several hundred kilometers, rendering nearly all ancient Assyria’s heartland both favorable for high-yield cereal cultivation and vulnerable to crop failures.

The latter was demonstrated during the severe drought episodes of 1999–2001 and 2007–2008 when cereal crop failures and widespread livestock death were pervasive across northern Syria and Iraq. These droughts, which were the most severe in the past 50 years, were marked by up to 60% reduction in cool-season rainfall over northern Iraq that exacerbated regional socioeconomic conditions already suffering from decades of political instability and unsustainable socioeconomic policies.

The Fifth Force of Nature Could Be Real and Fantastic
Popular Mechanics Caroline Delbert,Popular Mechanics 6 hours ago https://www.yahoo.com/news/fifth-force-nature-could-real-200600706.html

Dubious in the extreme.