The top quark is the most massive fundamental particle in the Standard Model. A new work makes a precision LHC measurement by using clever methods to reduce jet scale associated uncertainty. The bottom line value from the new work is:

This compared to the PDG global average of:

Prior measurements are summarized as follows: 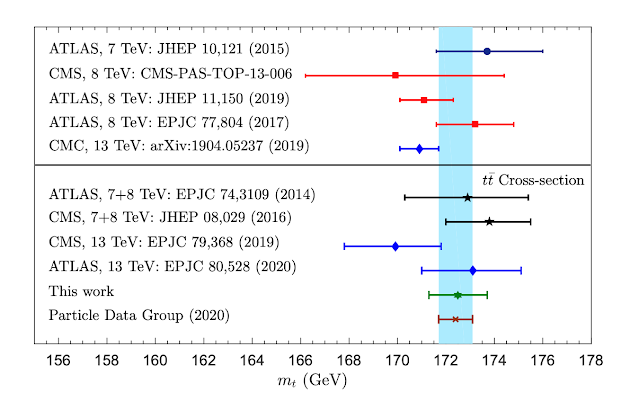 More background is recapped at a previous post at this blog about the top quark mass.

(1) global electroweak fits favor a top quark mass of:
m(t) = 173.52 ± 0.88 GeV
This is consistent with the Particle Data Group value at a 1 sigma level (given the uncertainties in both the PDG value and the prediction).
But fairly slight adjustments down of the W boson mass from the current estimate of 80.385 ± 0.015 GeV down by one or two standard deviations from this value would favor a somewhat lower global electroweak fit expectation for the top quark mass. 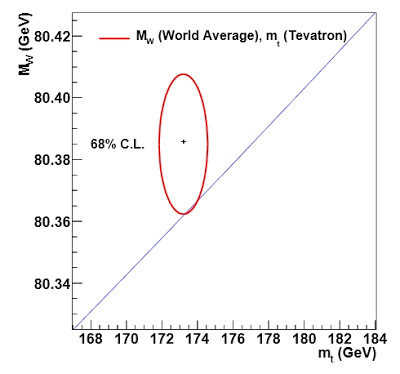 Simultaneous extraction of  and  from LHC  differential distributions

We present a joint extraction of the strong coupling  and the top-quark pole mass  from measurements of top-quark pair production performed by the ATLAS and CMS experiments at the 8 TeV LHC. For the first time, differential NNLO theory predictions for different values of the top-quark mass are utilised for four kinematic distributions: the average transverse momentum of the top-quark, its average rapidity and the pair invariant mass and rapidity. The use of fastNLO tables for these distributions allows rapid evaluation of the differential theory predictions for different PDF sets. We consider the single differential distributions from the experiments both separately and in combination in order to obtain the best fit to theory. Our final values are  and  GeV which are compatible with previous extractions using top-quark measurements. In the case of , our value is also compatible with the world average value collated by the Particle Data Group.

Looking at the 2019 lowballs: ATLAS and especially CMC and CMS 13 TeV.
I think the next project has to be some data archaeology on how come those values taken last year are offset beyond the bounds of error. This, to me, looks like the discrepancies over the Hubble Constant.

Keep in mind that the bars are just one sigma bars that one in three measurements more or less are expected to exceed.