A new study has examined ancient hepatitis B virus DNA. As Bernard's blog explains (in a translation from the original French by Google), because this virus is solely transmitted from humans to other humans (with some slight overlap with great apes), its evolution over time can be used as a proxy for ancestrally informative genetic information about people.

The hepatitis B virus affected in 2015, 257 million people around the world according to the WHO, of whom about a million died. It is transmitted through contact with body fluids mainly during sexual relations or in perinatal contexts. There is no environmental or animal reservoir. Therefore, this virus spreads with the dispersal of human beings. The latest paleogenetic studies have made it possible to find the hepatitis B virus in skeletons belonging to different periods, in particular in the Neolithic of Europe.

The Phylogeny Of Hepatitis B Virus Strains: 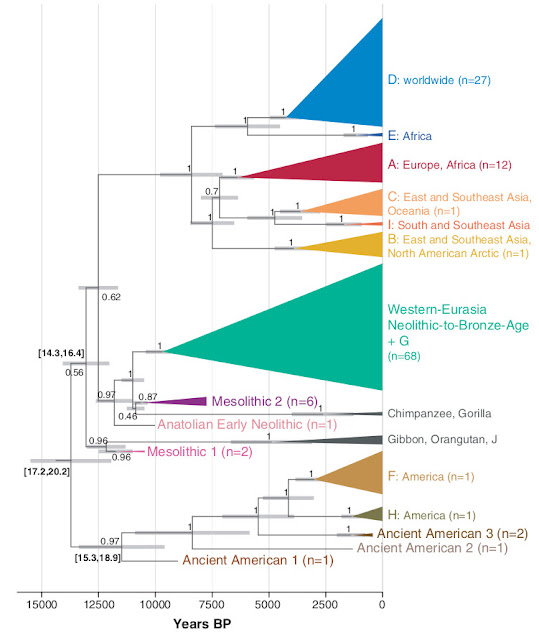 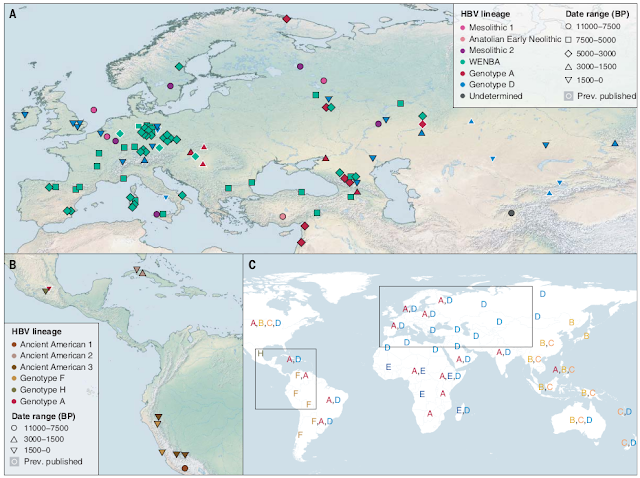 The New World Strains And Their Implications

Particularly notable is the estimated genetic mutation rate divergence time of the Hep B virus strains found in the Americas (related to modern strains F and H) from the strains found in Eurasia (related to modern human strains A, B, C, D, E, G, and I, and to the modern great ape strain J), a split of 17,000 to 20,000 years, which is around the time of the Last Glacial Maximum.

Notably, the predominantly American strains of Hep B with this deep ancestral split are now largely confined to Western South America and Meso-america. Presumably American strains of the Hep B virus were replaced by Old World strains of Hep B, first by Paleo-Eskimo and Thule waves of migration in Arctic and Sub-Arctic North America (which were probably one source of strain B), and then by strains brought by post-Columbian migrants to the Americas, who probably initially brought strains A and D, with later immigration to North America bringing strains B and C from Asia.

The estimated timing of the genetic divergence of private American Hep B strains in modern and ancient DNA  is more recent that newly announced well-dated archaeological evidence (from footprints in New Mexico) of a modern human presence in the Americas back to at least 23,000 years ago. Thus, this adds to other evidence that suggests that the first wave of modern humans in the Americas had little ecological impact and made little, if any, genetic contribution to subsequent waves of modern humans on the two continents.

The Phylogeny Of Old World Hep B Strains

The split between East and Southeast Asian (and Arctic North American) strains of the Hep B virus (B, C and I) and one found in Europe and Africa (A) dates to about 5500 BCE (which predates Austronesian maritime expansion in Oceania and island Southeast Asia), in the Middle Neolithic era but with the expansion of the current strains mostly dating to after 1000 BCE.

The split between both of these strains and the strain with the most global distribution (D) as well as ancestor to a predominantly African strain (E) is to about 6500 BCE, which is early to middle Neolithic (again, with a mostly post-Bronze Age expansion).

The Hep B virus strains related to modern humans strain G and modern great ape strain J were predominant in the time period from the Mesolithic to the Bronze Age in Europe and Anatolia, but are now only a tiny share of the total mix, and might have been missed entirely but for the intensity of medical genetic research using European samples.

The fact that the non-human great ape strains of the Hep B virus (J) has a more recent mutation dated split in the Mesolithic era (ca. 13,000 BCE to 10,000 BCE) than the split between the New World and Old World strains is also notable. Given the predominance of human strains of modern Hep B and the timing, a human to great ape transmission in this time frame somewhere in tropical or subtropical sub-Saharan Africa on at least two separate instances in the Mesolithic era seems far more likely than the reverse scenario. These transmissions probably involved great ape exposure to the blood of an infected human rather than intercourse, although there is no way to tell definitively.

We can't tell from the available data if Hep B was present and replaced by later strains in Wallacea or the Sahul region in the Upper Paleolithic era as it was in Asia and North America, or if it arrived later (at the time of the arrival of the dingo in a time period ca. 3000 BCE to 8000 BCE, via later Asian maritime travelers, or with later maritime contact with Europeans).

But it is also possible that the absence of evidence simply reflects a limited supply of ancient viral DNA from the region and limited whole genome sampling of Hep B cases among aboriginal Australians and indigenous peoples to the east of the Wallace line.

That doesn't fit with those same South Americans showing increased affinity to Tianyuan and decreased Denisovan ancestry. Polynesians should carry extra Denisovan and not extra Tianyuan. I think your scenario can be pretty much excluded on this basis, not to mention the difficulty of a handful of sailors affecting a pre-Columbian population that would have numbered in the tens of millions.

"not to mention the difficulty of a handful of sailors affecting a pre-Columbian population that would have numbered in the tens of millions."

With the percentages of ancestry present in the populations affected, that actually works out just about right. 10M is way too high for the population of the Amazon ca. 1200 CE and the following generations. Maybe 10M for the Americas as a whole, but jungles aren't very intensely populated.

It is simply completely impossible that the Paleo-Asian percentage can be older the 10kya or even 5kya. It has to be much more recent.

My guess is that the confused affinities are a statistical artifact of mixing South American Founder population DNA and Polynesian, similar to the way that at PCA1 and PCA2 for a global population, you would think that my children are Uyghurs (rather than 25% Northern European, 25% Finnish, and half Korean).

"It is simply completely impossible that the Paleo-Asian percentage can be older the 10kya or even 5kya. It has to be much more recent."

"My guess is that the confused affinities are a statistical artifact of mixing South American Founder population DNA and Polynesian, similar to the way that at PCA1 and PCA2 for a global population, you would think that my children are Uyghurs (rather than 25% Northern European, 25% Finnish, and half Korean)."

I doubt that. Neanderthal DNA seems to correlate well to Eurasian DNA in Africans.

This isn't a PCA. These are formal f stats.

Because a trait without an obviously observable phenotype trends to be very homogeneous after enough rounds of pseudo-random admixture after a surprisingly small number of generations in the absence of very strong population structure of the magnitude seen in South Asian castes that isn't present here. It takes only very weak assumptions about the extent to which mating is effectively random over 5,000+ years for the percentage of the whole genome with that ancestry component to be almost fixed in percentage in everyone in the community in that time frame. Yet, we see huge variations within small populations with only thin inter-population spouse exchange over short distances. The law of averages crushes that kind of variation very quickly.

You could have a narrative in which there was an isolated Paleo-Asian population that was isolated from other New World populations until the last 1000 years or so, but if you did, there would be a different very obvious signs that this was what was happening including highly diverged Y-DNA and mtDNA haplogroups private to that population and the distinct autosomal DNA signature that arises when you have a small isolated genetic population for a long time that becomes very distinct similar to the Kalash people (which is as distinct in admixture analysis from other subcontinental sized populations that aren't so isolated).

"This isn't a PCA. These are formal f stats."

Certainly, but the point is that any statistical test of population affinity can be subject to confounds in some circumstances. The juxtaposition of founder population indigenous American ancestry with a small subset of Polynesian ancestry might very well produce such a false positive since both have components related to the shares f stat closest match.