Was There A Paleo-American Ghost Population In Pre-Columbian Mexico? 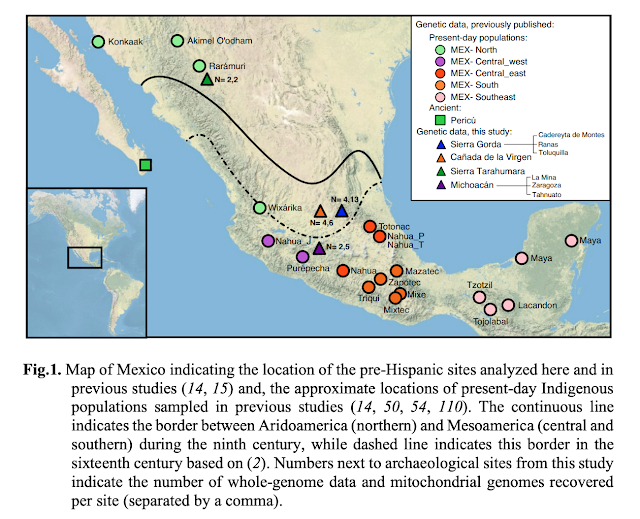 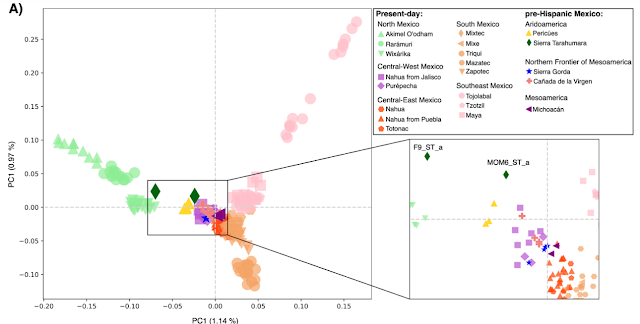 A new Mexican ancient DNA paper and its abstract are as follows:

Aridoamerica and Mesoamerica are two distinct cultural areas that hosted numerous pre-Hispanic civilizations between 2,500 BCE and 1,521 CE. The division between these regions shifted southward due to severe droughts ca. 1,100 years ago, allegedly driving demographic changes and population replacement in some sites in central Mexico.

Here, we present shotgun genome-wide data from 12 individuals and 26 mitochondrial genomes from eight pre-Hispanic archaeological sites across Mexico, including two at the shifting border of Aridoamerica and Mesoamerica.

We find population continuity spanning the climate change episode and a broad preservation of the genetic structure across present-day Mexico for the last 2,300 years.

Lastly, we identify a contribution to pre-Hispanic populations of northern and central Mexico from an ancient unsampled ′ghost′ population. 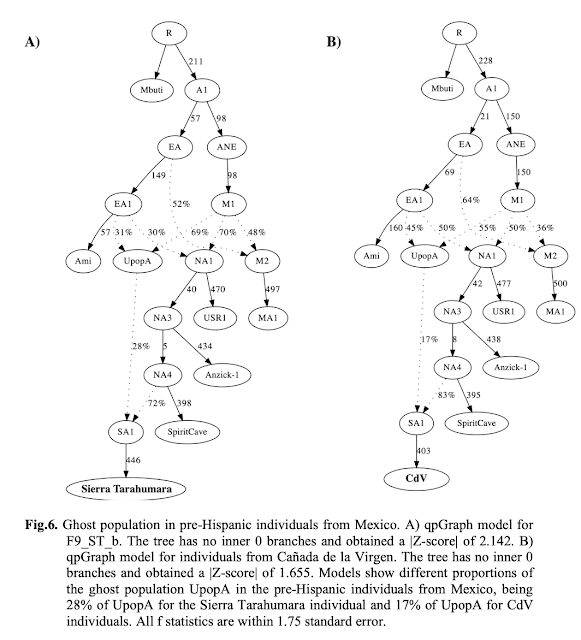 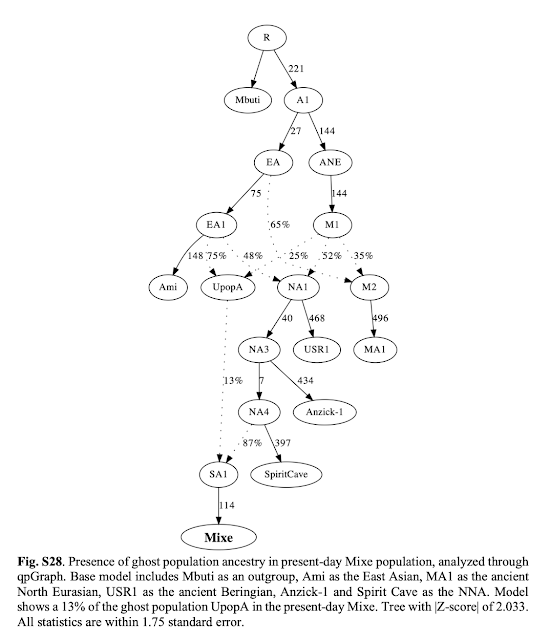 Ghost population contribution to pre-Hispanic Mexico
Earlier reports have demonstrated the detection of ancestry from an unsampled group, designated UpopA, among the present-day Mixe from Mexico and Lagoa Santa from Brazil populations.
We tested the presence of UpopA in the pre-Hispanic individuals, using an admixture graph model with the same topological framework but some modifications. We used Mbuti as an outgroup, Ami as the East Asian, MA1 as the ancient north Eurasian, USR1 as the ancient Beringian, Anzick-1 and Spirit Cave as the NNA, and Athabascan as the SNA.
Interestingly, the Mummy F9_ST_a from the north and the individuals from CdV from central Mexico have ancestry from a ‘ghost’ population, at 28% and 17%, respectively (|Z-score|: 2.142 434 and 1.655, respectively), consistent with the “ghost” UpopA ancestry reported in Mixe.
We repeated this test with the Mixe population to verify the contribution of the ghost population in our tested admixture graph structures, and found Mixe to have an ancestry coming from an unsampled UpopA population at 13% (|Z-score|: 2.34), which is similar to previous estimates of 11%. Models including individuals from other archaeological sites had |Z-score| values over 3 and branches with inner zeros, thus we rejected them. . . .

Furthermore, the qpGraph admixture models explored for the pre-Hispanic populations showed F9_ST_a and the ancient individuals from CdV have ancestry from an unsampled population that we hypothesize is the ghost population previously found named UpopA.

The contribution from UpopA was identified in present-day Mixe from Mexico and Lagoa Santa, Brazil, through qpGraph models and estimated to have diverged ~24,700 years ago from Native Americans.

Also, a more recent study through D statistics analysis has suggested that UpopA contributed to present day populations from north Mexico as Akimel O’odham, Guarijo, Rarámuri, Cora, Mexicanero, and Tepehuano, as well as in present-day populations from central and south Mexico as Mixe, Totonac, Nahuas from Puebla, Otomi from Hidalgo, Chocholteco and, Mocho.

Our study is the first to identify this UpopA ancestry in admixture models involving pre-Hispanic individuals from Mexico. Further aDNA studies from the Americas could help better characterize the source of this UpopA ghost population contributing to many present-day Indigenous populations from Mexico.

The drought 1,100 years ago mentioned in the paper was roughly of the same magnitude as the one that Colorado and the rest of the arid Southwest United States is facing right now.
I'm skeptical about the extent to which one can make strong statements made in the paper's abstract about population continuity over a thousand across the temporal boundary of this climate event in a region as large as present day Mexico from 26 ancient DNA samples, only 12 of which (none from earlier than 600 CE) have autosomal as well as mtDNA, and only 2 of which are from the hypothesized transition area.
The geographical mix of mtDNA and Y-DNA haplogroups found show continuity with the modern population genetics of Mexico:

Even though we identified previously unreported variants in the ancient mitogenomes, the spatial distribution of the haplogroups found, namely A, B, C and D, closely resembles that of present-day Mexico.

The information on the paternal lineage was limited, since, despite confirming the presence of the Native American chromosomal haplogroup Q in the pre-Hispanic males, there was no clear differential spatial distribution of the two identified sub-haplogroups, Q1a2a1-L54 and Q1a2a1a1a1-M3, in both Aridoamerica and Mesoamerica. Few studies have recovered information of ancient Y chromosome haplogroups across the Americas and, given the sex-biased admixture events after European colonization, the frequency of haplogroup Q in the present-day population is low.

The Supplemental Materials note that:

In the Sierra Tarahumara, we found two sub-linages of the mitochondrial haplogroup C (C 100%), as previously reported. In contrast, Central Mexico shows a higher diversity of mitochondrial haplogroups. Cañada de la Virgen was the site with the highest number of sub-haplogroups, 5 distributed in B 50%, A 25%, C 12%, and D 12%. Michoacán presented four different subhaplogroups (A 40%, D 40%, and C 20%). Sierra Gorda also presented four different subhaplogroups but corresponding to major lineages A 50%, B 43%, and D 7%, respectively. 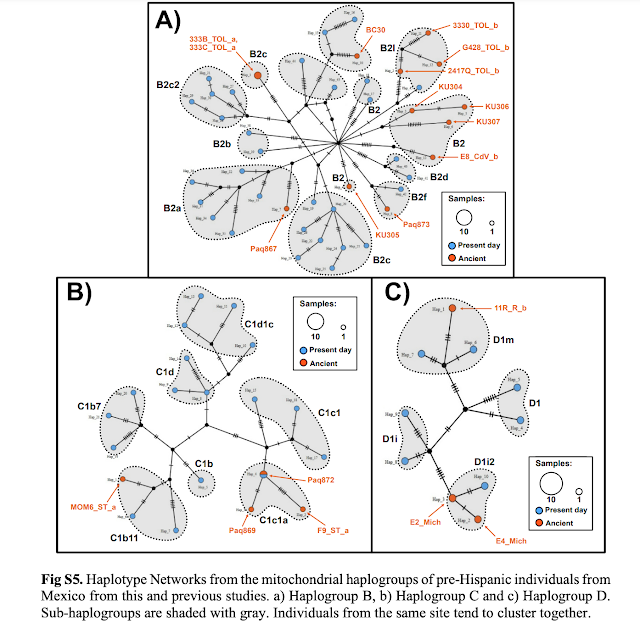 The body of the paper also analyzes effective population size, which it finds was basically constant until a population expansion 5,000 years ago, followed by a population decline starting slowly at 2,000 years ago and accelerating 500 years ago when contact with Europeans occurred (although the contractions still left effective population sizes far larger than those prior to the population expansion which was probably attributable to a shift to sedentary farming of maize, beans and squash).
The date where the contraction begins 2,000 years ago coincides which a much more severe drought than the current one or one occurring around 800 CE that took place in what is now the American Southwest around the 100s CE.
They propose a model in which the north to south client population structure seen in modern and ancient DNA in Mexico arose from "a northern/southern population split between 4,000 and 10,000 years ago followed by multiple waves of admixture events between them. . . . [with] subsequent splits within each of these regions 6,523 and 5,715 years ago for north and south, respectively."
The secondary splits, again, roughly correspond to the adoption of sedentary agriculture, and the estimated timing of the primary northern/southern split doesn't resolve whether it happened contemporaneous with that split, or took place earlier.
Posted 12:34 PM
Email ThisBlogThis!Share to TwitterShare to FacebookShare to Pinterest
Labels: anthropology, climate, demographic change, genetics, history, New World

Very interesting. I had not seen this before.

I wish they had tested populations other than the Ami for the East Asian relative of the ghost population.