Data Will Eventually Save The Day In Astrophysics

This short summary paper only analyzes the data about mass and light distributions in a galaxy cluster relative to the ΛCDM Standard Model of Cosmology.
Once again, it shows that the ΛCDM model doesn't fit the data: In real life, inferred dark matter sub-halos are more compact than predicted in the ΛCDM model.
Each new finding, on multiple fronts where the ΛCDM model is contradicted, leaves less and less room to argue that this model is not deeply flawed.
But even more importantly, thanks to the multiple new high quality telescopes out there collecting a veritable torrent of new data on systems like this one at high precision, we have a lot of high precision measurements of gravitationally bound systems that can be fit to different models, such as gravitationally based ones, once we've finally buried the dead horse of ΛCDM and begun to seriously consider alternatives.
I'm comfortable that because so many independent groups are collecting so much data, which is being widely shared, and because theorists are not as monolithic as they are in the high energy physics field, that eventually we will get the right answers, even if the sociology and culture of the astrophysics discipline means that it takes us longer to get to the right answer than it should. 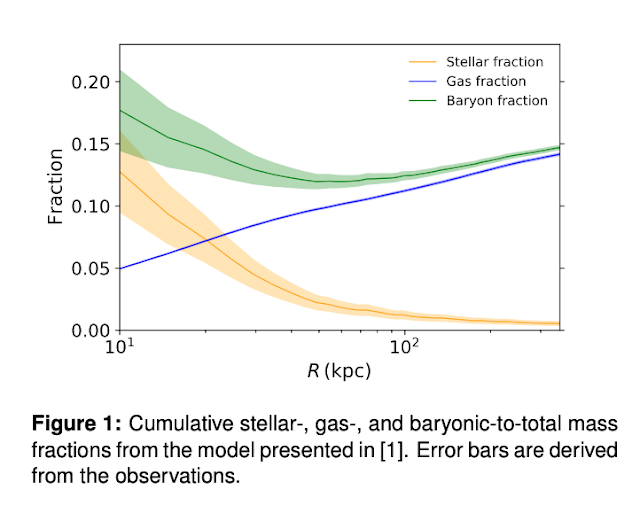 Strong gravitational lensing (SL) has emerged as a very accurate probe of the mass distribution of cluster- and galaxy-scale dark matter (DM) haloes in the inner regions of galaxy clusters. The derived properties of DM haloes can be compared to the predictions of high-resolution cosmological simulations, providing us with a test of the Standard Cosmological Model.

The usual choice of simple power-law scaling relations to link the total mass of members with their luminosity is one of the possible inherent systematics within SL models of galaxy clusters, and thus on the derived cluster masses. Using new information on their structural parameters (from HST imaging) and kinematics (from MUSE data), we build the Fundamental Plane (FP) for the early-type galaxies of the cluster Abell S1063. We take advantage of the calibrated FP to develop an improved SL model of the total mass of the cluster core.

The new method allows us to obtain more accurate and complex relations between the observables describing cluster members, and to completely fix their mass from their observed magnitudes and effective radii. Compared to the power-law approach, we find a different relation between the mass and the velocity dispersion of members, which shows a significant scatter. Thanks to a new estimate of the stellar mass of the cluster members from HST data, we measure the cumulative projected mass profiles out to a radius of 350 kpc, for all baryonic and DM components of the cluster.

Finally, we compare the physical properties of the sub-haloes in our model and those predicted by high-resolution hydrodynamical simulations. We obtain compatible results in terms of the stellar-over-total mass fraction of the members. On the other hand, we confirm the recently reported discrepancy in terms of sub-halo compactness: at a fixed total mass value, simulated sub-haloes are less compact than what our SL model predicts.

Galaxy clusters are the most massive gravitationally bound structures in the Universe, and around 85 − 90% of their total mass is under the form of dark matter (DM). As a consequence, they are excellent astrophysical laboratories to test our hypoteses on the nature of DM itself. Thanks to several dedicated photometric and spectroscopic surveys, strong gravitational lensing (SL) has become the most accurate probe of the total mass distribution in the cores (out to a few hundreds of kiloparsecs from the centre) of massive galaxy clusters. SL can be combined with baryonic mass diagnostics to disentangle the mass distribution of cluster- and galaxy-scale DM haloes from the total mass distribution of the cluster. The resulting DM mass profiles can be compared to the predictions of high-resolution cosmological simulations, based on the Λ cold dark matter (CDM) Cosmological Model.
The remarkable improvement in the accuracy of SL models, driven by recent observational campaigns, has allowed us to map robustly the mass distribution of the DM haloes hosting the member galaxies (usually referred to as sub-haloes). On this scale, a significant discrepancy between the predictions of SL models and highresolution simulations has recently emerged: at a fixed galaxy total mass, sub-haloes extracted from SL models are more compact than their simulated counterparts [2].
[2] Meneghetti, M., et al., 2020, Science, 369, 1347 . . .
As anticipated, comparing the physical properties of the DM sub-haloes as predicted by SL models to the most recent cosmological simulations is a test of the foundations of the Λ CDM cosmological model on which the simulations are based, and of the micro-physics of DM.
We first compare the stellar-to-total mass fractions of the cluster members with the predictions of recent HOD studies based on DM-only N-body simulations [7]. We find a significant discrepancy: the stellar mass fraction values predicted by SL models are almost an order of magnitude higher than those predicted by the HOD procedure. This discrepancy is resolved if one considers, instead, hydrodynamical simulations, which include gas particles and stars, as well as the effects of the interaction between baryons and DM during the formation of clusters. We consider high-resolution simulations of clusters with a mass similar to that of AS1063 from [8]. We perform two-dimensional projections to simulate the lensing observational conditions. In this case, we find compatible stellar mass fraction values from the SL model and the simulation suite.
Secondly, we examine how sub-haloes extracted from lensing models compare to their simulated counterparts in terms of maximum circular velocity, which is a proxy for their compactness. [2] recently found that hydrodynamical simulations predict high-mass sub-haloes (total mass M > 10^10 M) to be significantly less compact than forecast by a sample of state-of-the-art SL models, including the model of Abell S1063 presented in [4].
The new technique we adopt significantly impacts the relation between the total mass and the maximum circular velocity of the sub-haloes, obtaining again a different slope compared to [4] and allowing for the inclusion of a scatter. However, as shown in Figure 2, our results agree with those from [4] in the mass range considered, thus confirming the reported discrepancy. Several tests to infer the origin of this discrepancy are being performed, focusing both on SL modelling and on the implementation of the cosmological simulations. However, no conclusive answer has been obtained so far. This leaves several open questions, and could point towards a new fundamental challenge for the Λ CDM paradigm. 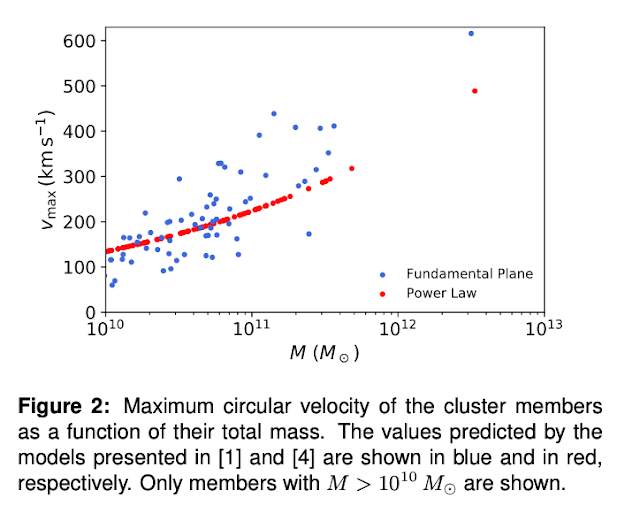 [1] is the result from the modeling of strong gravitational lensing observations in this study (blue), [4] is the distribution predicted by the ΛCDM model (red).
See also here ("At z~2 there is ~40% less dark matter mass on average within R(e) compared to expected values based on cosmological stellar-mass halo-mass relations.")
Posted 6:50 AM
Email ThisBlogThis!Share to TwitterShare to FacebookShare to Pinterest
Labels: astronomy, cosmology, dark matter, physics, science

does this falsify MOND and Deur?

MOND, of course, underestimates DM effects in clusters generally. Deur's approach does not have this problem.

Similar research is reported upon at

Not really. Strong gravitational lensing contradicts LambdaCDM and LambdaCDM has other problems in clusters as well and isn't predictive.

I have yet to see a DM particle model that purports to fix the strong lensing problem of LambdaCDM and also the galaxy scale problems with it (as well as, e.g., impossible early galaxies).

what do you think causes gravitational lensing in galaxies

"what do you think causes gravitational lensing in galaxies"

Gravitational fields which are more non-linear in GR than they are widely believed to be.

The dark matter paradigm is very likely to be wrong.

bullet cluster gravitational lensing is offset by the visible matter

Which is something that, as Deur and Moffat have both demonstrated, can easily be addressed in modified gravity theories that unlike Newtonian gravity, aren't Abelian.

are Deur and Moffat peer reviewed ?