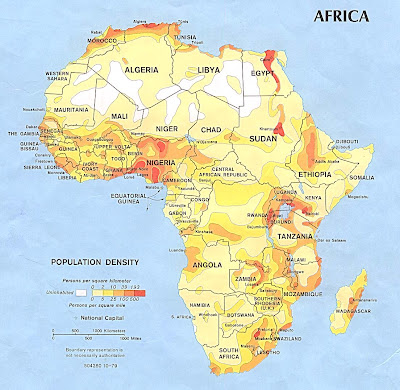 Dienekes notes the latest estimate of the population size of modern humans ca. 130,000 years ago, which would be just prior to the Out of Africa event, citing and quoting from Per Sjödin, Agnès E Sjöstrand, Mattias Jakobsson and Michael G B Blum, "Resequencing data provide no evidence for a human bottleneck in Africa during the penultimate glacial period" Mol Biol Evol (2012)doi: 10.1093/molbev/mss061.

Using the estimates of autosomal mutation rates derived from actual direct measurement in mother-father-child trios, which I believe to be more accurate than the mutation rate inferred from human-chimpanzee divergence, the effective population size was about 12,000 (95% confidence interval 9,000-15,000), implying a "census" population of about 90,000-150,000 modern humans who are ancestral to people who remain in the gene pool today in Sub-Saharan Africa.

The researchers note that:

Assuming that the range of humans extends over all the 24 millions km2 of Sub-Saharan Africa, the density of humans at that time would have been extremely low between 0.5 and 1.4 individual per 100 km2, which is even lower than the lowest recorded hunter gatherer density of 2 individuals per 100 km2 reported for the !Kung (Kelly 1995) and the density of 3 individuals per 100 km2 estimated for Middle Paleolithic people (Hassan 1981). However, this discrepancy disappears if humans were restricted to an area some 3-6 times smaller than the entire Sub-Saharan Africa.

However, as the modern population densities of Sub-Saharan Africa make clear, an assumption of a uniform population density in Middle Paleolithic Africa makes no sense. Some habitats are better for modern humans hunter-gatherers than others, and the !Kung continue to survive as a hunter-gatherer and herder society precisely because they live someplace with among the worst conditions for modern humans that it is possible to survive upon. In contrast, Middle Paleolithic modern human hunter-gatherers would have lived in the optimal environments for their life style in which they evolved in the first place.

OR there was a much larger population in fact. The synthesis exercise you make here is interesting but the final conclusions are unsustainable because when the OoA happened (L3 node or slightly later), the L2, L1 and L0 expansions (plus the less important L5 and L4 ones) had already happened in their essence and that means that Southern and Western Africa were already colonized.

Per my 2010 calculations, L0 (East Africa initially), L1 (Central-West Africa initially) and L2"6 show first signs of expansion at the 9th coding region mutation level, what means that at this 9T time after 'Eve' (T meaning the time per mutation, which does not need to be constant but certainly consistent) there were (at least) three populations located (roughly) in the Upper Nile, Cameroon and Equatorial East Africa.

There are other expansions before the L3 node anyhow. Notably a second expansion at 21T of: L2 (probably at Lake Chad basin with projection westward), L0d1'2 (colonization of Southern Africa) and L3'4 (a new layer in the Upper Nile)

[All calculations subject to change depending on new mtDNA phylogeny findings but likely to stand in the rough outline at least].

So it's effectively impossible that the population was concentrated in such a small fraction of the continent as 5-10% the total area). I think it's reasonable to think that Homo sapiens used everything (but jungles?) between the Niger to the coasts of Northern Mozambique at 9T (first clear expansiveness) and that is surely more than 25%. The area used at 21T (second major African expansion) should be larger and probably include all Africa (at least South of the Sahara) and even the first incursions to Arabia are not impossible at this time.

Then comes L3 at 23T, what is the same as saying OoA (as part of a third African expansion). I think that the population was only bottlenecked before 9T, then it expanded in several bouts as described here.

The absolute age is fuzzy.

It is certainly plausible that pre-Out of Africa population densities were almost as lumpy as they are now, and you are surely right that there had to have been geographicallly distinct subpopulations corresponding to the major mtDNA haplogroup L lineages at the time of the Out of Africa event.

Population densities tracking the current ones in a census population of perhaps 120,000 in all are not inconsistent with the possibility of half a dozen subpopulations with the larger ones centered around the currently dense population centers (e.g. Nigeria and the Northern Rift Valley), and others centered around secondary clumps of dnesity (e.g. Ethiopia and Northern Mozambique), with a lot of virtually (although not absolutely) uninhabited area between them. I also think it is very plausible that some of the sparsely populations which resided in marginal areas ca. 130 kya, were wiped out and are not represented in modern gene pools in situations comparable to that of the Tasmanians in their marginal environment.

Obviously, my percentages are rough and subject to material definitional issues that are undefined (how do you define the geographic area occupied by semi-nomadic hunter-gatherers with partially overlapping territories? and there may be great differences in range for 95% of humanity v. 98% v. 100%). But, the key point I am making is that a large share of the total probably lived in areas of relatively high population density relative to the !Kung.

I find difficult to imagine a density below that of the !Kung - they live in the desert after all. The natural tendency must have been to occupy any open niche as long as there was no barrier (like the desert, the sea, Neanderthal competition or excessive cold), so soon people would be inhabiting at least the prairie/savanna/sahel areas of Africa.

We know for a fact that c. 160 Ka they were already in Morocco, as well as Ethiopia - even if the Jebel Irhoud people did not leave any appreciable descent, the indicate that early Homo sapiens people was already migrating long distances and that got clearly confirmed c. 120 Ka. when modern human evidence is found in North Africa, Palestine, South Arabia and Mozambique.

There was nothing holding them: they must have quickly occupied all the usable landscape as soon as they got moving (and judging by Jebel Irhoud that is c. 160 Ka ago).

"... the key point I am making is that a large share of the total probably lived in areas of relatively high population density relative to the !Kung".

I agree with that. However let's not forget that !Kung have bow and arrow (and poison) and we do not know when humankind invented that useful (or equivalent) weapon. On the other hand they may have been similarly adaptive before it.

My son is researching the history of the bow and arrow for school and the earliest attested case of bow and arrow use that he could locate was 25,000 years ago, which would be the tail end of the pre-LGM part of the Upper Paleolithic and witin a few thousand years of the extnction of Neanderthal and probalbyof the extinction of Deninsovians and all other mainland Eurasian archaic hominins.

The timing of bow use coincides srongly enough wiht megafauna extinction to suggest ath it was one factor of many that madeit possible to kill mgafuana in large numbers.

But earliest attested is just an terminus ante quam. It implies that it was known at that time but not that it was not known before.

Anyhow, the bone points of Sibudu cave have been considered arrow points for example and similar to those used by Bushmen today.

According to Mundo Neandertal[es], these points are identical to those used by Bushmen today to kill birds and small mammals (source is museum curator L. Backwella at Pretoria News but link is broken).

Thanks for the heads up. My son is actually doing a project on the history of the bow and arrow this week.

He will get an A+ if justice is to be done, right?