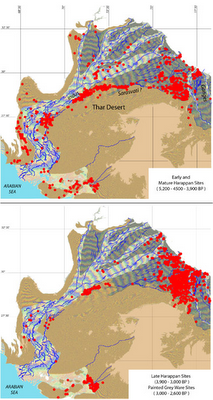 The Indus River Valley (more or less greater Pakistan) had a continuous agricultural civilization, derived from the Fertile Crescent Neolithic revolution from around that Egypt was established until the dawn of the Bronze Age, with is culmination and peak called Harappan civilization.  Why did it collapse?

A new study confirms previous suspicions that climate change leading to the demise of the Ghaggar-Hakra River, mythologically referred to as Sarasvati River, which is now a mere seasonal river bed.  The now dry most of the year river bed is home to a high density of Harappan settlements.

So, where did the Harappans go as the old system fell apart and an Indo-European superstrate appeared in the Vedic era?

The study concludes that as a result of the collapse of the river system they "emigrate eastwards towards the Ganges, where monsoons were still stable but where the fertility was not good enough to support large cities as in the West."  More here.  The press release for the study states that "the Indus civilization developed 5200 years ago, built its cities, and slowly disintegrated between 3900 and 3000 years ago."  It goes on to state that:

By 3900 years ago, their rivers drying, the Harappans had an escape route to the east toward the Ganges basin, where monsoon rains remained reliable.

"We can envision that this eastern shift involved a change to more localized forms of economy: smaller communities supported by local rain-fed farming and dwindling streams. . . .This may have produced smaller surpluses, and would not have supported large cities, but would have been reliable."

Such a system was not favorable for the Indus civilization, which had been built on bumper crop surpluses along the Indus and the Ghaggar-Hakra rivers in the earlier wetter era. This dispersal of population meant that there was no longer a concentration of workforce to support urbanism. "Thus cities collapsed, but smaller agricultural communities were sustainable and flourished. Many of the urban arts, such as writing, faded away, but agriculture continued and actually diversified[.]"


To the extent that there was a decidedly eastern migration to the Ganges (basically in Northern India) from the Harappan region, of course, the implication would be that Iran's population and legacy cultures do not reflect this end of civilization exodus nearly so strongly.

The study's claim that the transition was a gradual one over nine hundred years is also one that I would take with a grain of salt. Many transitions that look gradual when one has relatively low precision means of seeing that it exists, later turn out to have been more abrupt or complicated than they had seemed originally. For example, while the Roman empire's decline can be said to have been gradual, there are some specific and dramatic historic events that we think of historically as punctuating the fall of the Roman empire.

Has Harappan Society Left A Cultural, Genetic Or Linguistic Legacy?

The first definitive signs of the influx of Indo-European influence in South Asia start around 3900 years ago (e.g. the early Cemetery H culture "in and around Western Punjab"). There are some indications that early sites like Cemetery H do not show signs of demic transition (or violent invasions) (Wikipedia cites Kennedy, Kenneth A. R. (2000). God-Apes and Fossil Men: Palaeoanthropology of South Asia at page 312, and Mallory, J. P.; Adams, D. Q. (1997). Encyclopedia of Indo-European Culture. London and Chicago: Fitzroy-Dearborn. ISBN 1-884964-98-2 at pages 103 and 110, for these points), but features like the appearance of widespread cremation there, which is characteristic of the advent of Indo-European influence, and contemparenous appearance of metal working similar to that of the Caucusas region, suggest some Indo-European influence at this point. Early Vedic literature alludes to the period in which there is a transition from burial to cremation practices of the kind seen a Cemetery H. A demic influence is arguably greater in the subsequent and more Northern "Gandhara grave (or Swāt) culture emerged ca. 1600 BC, and flourished in Gandhara, Pakistan" which is more definitively associated with early Vedic ethnogenesis.

It isn't at all clear how much of a substrate influence the hollow Indus River Valley civilization had on the incoming Indo-Aryan invaders.  When the dust settled after their influx, the Sanskrit language and the Hindu religion were the result and the subsequent events are a matter of historic record, or at least much more solid evidence.  But, to parse how much the Indo-Aryans and the descendants of the Harappans, respectively, contributed, one can compare how early Vedic society differed from other contemporary Indo-European societies (e.g. the Mycenean Greeks, the Hittites, the Tocharians, Avestian civilization), and one can look at what cultural aspects of Vedic society are identifiable holder overs from pre-Vedic Harappan society.

In one narrative, the Harappans might have had as much of a cultural impact on their invaders as the Greeks did on the invading Romans, for example.  In another, the Harappan language and culture may have been almost completely lost as a result of the collapse of their own civilization followed by the arrival of Indo-European invaders.

An extreme version of this narrative is the "Out of India" theory of Indo-European civilization, that would argue that many of the key cultural and linguistic elements of Indo-European civilization may be derivative of Harappan civilization that moved into a diasporic phase with the fall of its own civilization, perhaps in particular as refined in places like the BMAC cultural area which was arguably basically a Harappan trade colony, rather than a truly independent civilization. This theory, while far from mainstream, would help explain how such a developed civilization could disappear seemingly without leaving any cultural trace and how horsemen of the Central Asian and European steppe could have developed a culture so suited to urban and agricultural life. A predominantly Gangetic destination for Harappan civilization's descendants, however, would argue that this dying civilization's impact may have been much more modest.

Genetic evidence is also starting to become quite informative about the extent to which the Indo-Aryan impact was demic (i.e. driven by population replacement and admixture), something that varies by region and caste in South Asia.  See, e.g., here.   For example, in South India that the Indo-European specific genetic impact may have been on the order of 5%-15% among Brahmins (the highest and so called priestly broad caste (there are also narrow subcastes) and a minority of the overall population) and much less in lower caste populations, but with a much greater demic impact, not necessarily quite so limited to higher caste populations, in North India.

But, there is still a lack of clarity regarding how much of the genetic distinction along an Ancestral North Indian (ANI) and Ancestral South Indian (ASI) cline in modern India is due to the Indo-Aryan invasion and how much of it has deeper roots from older North-South population divisions in India, which has been inhabited by modern humans since at least the Toba volcano eruption ca. 74,000 years ago.  For example, there are some population genetic indications that India's caste system may have pre-Indo-Aryan roots, since there are notable caste based genetic distinctions even in areas with little apparent Indo-Aryan demic impact that have a genetic signature that appears quite ancient.  Much of South Asia's uniparental lineages in both ANI and ASI trending populations, and in both Y-DNA and mtDNA, are phylogenetically basal and have clear South Asian origins as they are not found anywhere else in at high frequencies among people other than South Asian expatriates and their descendants.