The Lost Civilizations Of The Wet Sahara 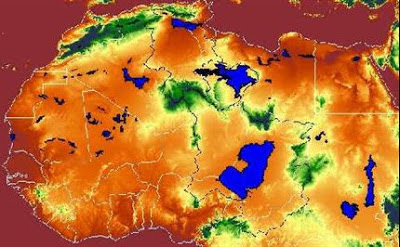 An image illustrating the location and scale of the Saharan Megalakes (via the Linear Population Model Blog).

There were several huge freshwater lakes in what is now the Sahara desert in Southern Libya that dried up about 3,000 years ago (Lake Chad was also much larger and the surrounding regions were much more lush in this era, particularly in highland areas).

At their peak, these lakes supported food producing, tool making civilizations that left their rock art behind. In this era, the Sahara desert region that now forms a barrier between North Africa and the rest of the Continent was instead a hub of modern human activity.

The past few years have produced a considerable body of scholarly work that describes what was going on in Saharan North Africa from the early Neolithic era through what was in Europe the Bronze Age, which would have been impossible if naive extrapolations of current climate conditions back to that era were accurate. This newly discovered chapter of North African prehistory has the potential to inform a greatly revised understanding of the historical roots of the modern African cultures of North Africa, West Africa and East Africa.

Marnie Dunsmore's blog, Linear Population Model, has had a number of very solid recent posts on North African pre-history and genetics that explore these points.

Posts here, here and here provide the foundational paleoclimate evidence that has been developed about the Holocene Climate Optimum in the Sahara. Then, one links a lithic chronology of that period in the region at another blog (Two posts link recent published articles on the same subject). There is a post that references an scholarly article linking archaeological relic finds to the wet Sahara era and the cultures implicated in them. Three more posts fit Saharan rock art into this context (also here).

An article identifying possible refugia of African Savannah herd animals based upon genetic evidence and interpreted in light of paleoclimatic conditions is identififed in another recent post.

There is now a solid periodization of several successive well defined archaeological cultures of the Central Sahara, in places where one wouldn't think to look for human relics and remains at all, that also shed light, for example, on the chronology of and process by which dairying, and more generally food production via herding domesticated animals, arrived in North Africa. Understanding this chronology is also absolutely essential to piecing together the origins of Africa's major linguistic families and the sources of its modern ethnic groups.

One concerns the possibility that mtDNA haplogroup H1 arrived in North Africa from Southern Europe in the Epipaleolithic possibly in association with Y-DNA haplogroup R1b-V88, in light of a 2010 PLOS paper on the subject. I am inclined to give credit to the 2010 paper's suggestion of an Iberian origin for H1 that may have been pre-Neolithic (something that is also likely the case of mtDNA haplogroup V). But, I have serious doubts about the importance as a route of prehistoric migration (in both directions and by both humans and other fauna) that Marnie has attributed to the Straight of Sicily.

I also am inclined to think that the R1b-V88 is to closely linked to the linguistically Chadic population and its near geographic neighbors, who are probably relatively recent arrivals on the African scene (my best guess from the published work would be 5,000 BCE to 3,000 BCE), to have a strong association with mtDNA H1. I am also inclined, given its phylogenetic relationship to the R1b clades found in Western Europe in general, and Iberia in particular, to think that R1b-V88 has African origins that derive from Southwestern rather than Southeastern Europe.

Another post has a nice vigorous discussion of the back migration of mtDNA haplogroups M1 and U6 to Africa and their subsequent expansions, as compared to the modal European mtDNA haplogroup, U5. Some of the key issues are which of the North African archaelogical cultures to associate these mtDNA haplogroups with; the issues involved in determining if these are pre-Last Glacial Maximum ca. 20,000 years ago (and hence associated with an older archaeological culture in North Africa), or post-LGM (and associated with a more recent archaeological culture), are quite technical and not salient enough to the big prehistory issues I care most about right now to inspire me to really closely examine the arguments on this point.
Posted 2:40 PM
Email ThisBlogThis!Share to TwitterShare to FacebookShare to Pinterest
Labels: Africa, anthropology, blogs, climate, culture, genetics, history, language

Interesting post. It also has relevance for the 'original' OoA, surely.