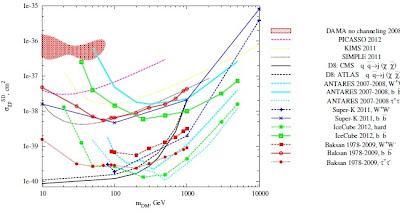 The latest direct search for dark matter particles, based on muon neutrino observations of the sun conducted since 1978 in the Caucasus Mountains (the BUST Experiment at Baksan) have continued to come up empty and to place stringent limits on the properties of dark matter in the solar system vicinity if it exists at all.

Direct searches for dark matter particles of 10 GeV and up of a type called WIMPs (weakly interacting massive particles) have ruled out such particles by a robust variety of methods down to very low cross-sections of interaction (on the order of 3*10^-4 picobarns which is equivalent to 3*10^-40 cm^2 and 3*10^-44 m^2).

This is a bad thing for physicists who hope to understand the universe with existing theories.

The intervening 80 years revealed all sorts of particles we weren't looking for.  Nobel laureate I. I. Rabi famously quipped, upon the discovery of the muon, "Who ordered that?"  But, we have yet to detect a single particle responsible for a huge share of the mass in the universe, if it exists at all, despite looking very hard for it.

Standard cold dark matter theory, the leading (but increasingly experimentally obsolete) theory of dark matter, needs dark matter particles of 10 GeV or more, that interact weakly (i.e. WIMPS) and it needs them at a fairly well specified density in the vicinity of the solar system. Many beyond the Standard Model theories, including SUSY, propose that dark matter candidates exist in that mass range. But, they are nowhere to be found unless they interact even less strongly than do particles like neutrinos, which only interact via the weak force (and lack electrical charge or strong nuclear force interactions), something that is not true of any known massive particle.

Crude calculations of neutrino elastic cross sections of interaction are 5*10^-44 cm^2, a range not yet excluded by current experiments, but the more elaborate calculation is one that is mass and momentum dependent, so this isn't necessarily a notable excuse for not detecting 10 GeV particles in experiments that could not detect sub-eV particles that were otherwise comparable.

Some revised theoretical expectations as of 2008 for SUSY WIMPS can be found here and are below current detection limits.  But, from the same link "to quote a particle physicist,"


The most appealing possibility - a weak scale dark matter particle interacting with matter via Z-boson exchange - leads to the cross section of order 10^-39 cm2 which was excluded back in the 80s by the first round of dark matter experiments. There exists another natural possibility for WIMP dark matter: a particle interacting via Higgs boson exchange. This would lead to the cross section in the 10^-42-10^-46 cm2 ballpark (depending on the Higgs mass and on the coupling of dark matter to the Higgs).

In other words, "plain vanilla" Cold Dark Matter WIMPS have been experimentally excluded in the vicinity of the solar system at the expected densities.  One needs "exotic WIMPS" or WIMP distributions for Cold Dark Matter theory to work, and measurements 2 to 6 orders of magnitude more precise (just a few decades off at current levels of progress in improving experimental accuracy) would exclude them as well.

Certainly, each of these searchers are subject to a variety of assumptions.

But, the wide variety of experimental methods that have produced consistent results makes the conclusions robust to many of these assumptions.  One has to have a quite exotic BSM dark matter particle to escape the experimental limits now in place.

"Sterile neutrinos" (i.e. massive fundamental particles that act like neutrinos except that they don't interact via the weak force) could fit the bill because they wouldn't be produced in weak force decays and hence can't be ruled out by them.  But, how do you go about directly detecting something that has no non-gravitational interactions?

Of course, another possibility is that exotic fundamental particles are not the source of the dark matter effects observed which might instead be due to something such as modifications to the laws of gravity.

The ultimate source article for the discussion above is here.

A recent Science New feature misleadingly suggests that the likelihood that direct dark matter detection experiments will discover something are just around the corner, but does accurately note that the non-detection of heavy WIMPS so far disfavors SUSY theories.
Posted 5:31 PM
Email ThisBlogThis!Share to TwitterShare to FacebookShare to Pinterest
Labels: BSM theories, dark matter, experimental BSM data, physics