Does The Basilisk Have Roots In A Real Snake?

Many writers, some of non-fiction, and many of fiction drawing on a mixed fiction and non-fiction tradition, have written about the reputed venomous animal called the Basilisk.  Does this legend have roots in a real animal.  This post argues that it does and identifies the most likely candidate based on the earliest written account of one and the relevant candidate species of venomous reptiles.


One of the earliest accounts of the basilisk comes from Pliny the Elder's Natural History, written in roughly 79 AD. He describes the catoblepas, a monstrous cow-like creature of which "all who behold its eyes, fall dead upon the spot,"[3] and then goes on to say,

"There is the same power also in the serpent called the basilisk. It is produced in the province of Cyrene, being not more than twelve fingers in length. It has a white spot on the head, strongly resembling a sort of a diadem. When it hisses, all the other serpents fly from it: and it does not advance its body, like the others, by a succession of folds, but moves along upright and erect upon the middle. It destroys all shrubs, not only by its contact, but those even that it has breathed upon; it burns up all the grass too, and breaks the stones, so tremendous is its noxious influence. It was formerly a general belief that if a man on horseback killed one of these animals with a spear, the poison would run up the weapon and kill, not only the rider, but the horse as well. To this dreadful monster the crow of a rooster is fatal, a thing that has been tried with success, for kings have often desired to see its body when killed; so true is it that it has pleased Nature that there should be nothing without its antidote. The animal is thrown into the hole of the basilisk, which is easily known from the soil around it being infected. The weasel destroys the basilisk by its odour, but dies itself in this struggle of nature against its own self."[4]

Cyrene is a historical province of the Roman empire basically along the western border of modern Egypt in modern Libya.

Pliny the Elder had served as a senior Roman civil servant in Tripoli and Northern Libya about five years before his work was published, although not in Cyrene itself, and had traveled to almost all parts of the Roman empire during his career as a student, soldier, civil servant and natural philosopher.

The name "Basilisk" has Greco-Roman origins "from Latin basiliscus, from Greek basiliskos "little king," dim. of basileus "king" (see Basil); said by Pliny to have been so called because of a crest or spot on its head resembling a crown."  Thus, the name basically meant "little king snake."

Many later Basilisk accounts which arose in the Middle Ages and later, seem to be derived from Pliny's account and then exaggerated or distorted in the retelling by people in places that no longer had any cobras of any kind, and had never travelled to any place that did.

While various candidates for the origins of this myth have been suggested, discussion has focused on several kinds of snakes commonly called cobras, although from several different subtypes of them.  This post argues that the Nubian Spitting Cobra is probably the source of the Basilisk account made by Pliny the Elder in his Natural History in 79 CE.

* Pliny describes the Basalisk as a kind of serpent, which would suggest at least a reptile and probably a snake.

* The "upright and erect upon the middle" mode of locomotion language in Pliny's description is very distinctive as a means of distinguishing cobras from non-cobras.  Many species of cobras also have a distinctive hiss.

* The King Cobra, sometimes discussed, is a poor fit as it is too big to fit the "twelve fingers" description and also is native to Asia, rather than North Africa, an error that Pliny was probably too close to the source to mistake. 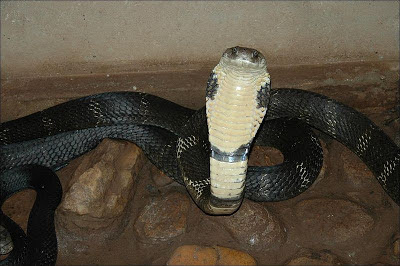 * Many cobras also have distinctive hood markings that could be interpreted as a diadem pattern, but not the geographically more plausible and very lethally venomous, Desert Black Snake.  These are pure black without a diadem pattern (although juveniles in eastern North Africa have a pattern of reddish crossbars on the back), and don't look stereotypically cobra-like even though they are actually a kind of cobra, although it is not part of the distinctive Naja genus of the subfamily of snakes that that do have this distinctive appearance.  Here is what a Desert Black Snake looks like: 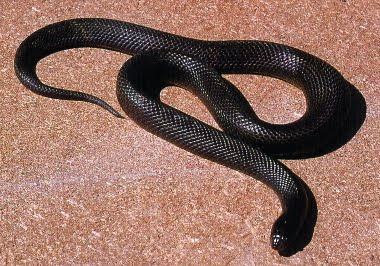 * There are sixteen species of Naja genus cobras found in Africa or the Middle East.  But, only two of those species: the Egyptian Cobra and the Nubian Spitting Cobra would have had habitats in or near the Roman province of Cyrene in the historic era.

* The geographically fitting Egyptian Cobra looks the part, but does not spit venom, a trait present in other African cobras which could explain the myth that those who look into its eyes can be afflicted from a short distance even if they are not bitten. An image of an Egyptian Cobra is below: 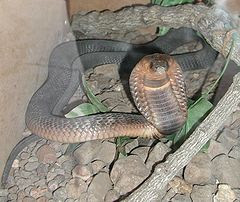 * Geography (they are found in northeastern Africa in parts of Egypt, Sudan, Chad, Niger and Eritrea), the venom spitting trait, and distinctive hood markings do coincide, however, in the case of the Nubian spitting cobra.  An image of one is below: 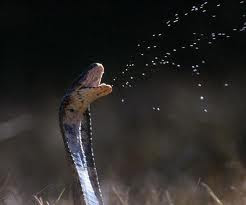 The deadly Nubian spitting cobra "likes to hide in holes, brush piles or any other ground cover during the day. If provoked or threatened, it will raise its forebody, spread its hood and readily spit jets of venom at the face of its predator or threat. It prefers to prey on amphibians (such as frogs and toads) if and when they are available, but will feed on rodents, birds and probably snakes."

These facts fit the notion that roosters incubate its eggs, something that could be wrongfully inferred because rooster feathers would likely be found in the Nubian spitting snake's nest.

The association with weasels is like a reference to the venom resistant cobra killing mongoose (who cobras sometimes kill by constriction), which look a great deal like weasels (and don't actually use smell to defeat cobras).  The range of the mongoose overlaps signficantly, even today, with the range of the Nubian spitting cobra.
Posted 12:18 PM
Email ThisBlogThis!Share to TwitterShare to FacebookShare to Pinterest
Labels: Africa, culture, history, zoology