Preliminary results of ancient DNA tests being conducted in Denmark on nearly complete Paleo-American remains from ca. 7000 BCE to 6900 BCE, known as Kennewick man, discovered the banks of the Columbia River in the state of Washington in 1996 CE, confirm that he had an ordinary Native American DNA profile, despite having an inferred facial structure with features more typical of contemporary Europeans.  Legal disputes delayed the result.

The genetic results confirm the prevailing paradigm on the settlement of the New World by modern humans.  While there were some instances of pre-Columbian human contact with the Americas after the arrival of its pre-Holocene era founding population and the closing of the Bering land bridge, the exceptions were few, are increasingly well understood, and didn't have much of a demic impact on the majority of Native Americans.

Specifically, there were three major pre-Columbian waves of post-founding circumpolar area migration to North America in the time period since 3500 BCE, and somewhere between two and a half dozen or so minor instances of contact in the thousand years before the arrival of Columbus that had much more minor demographic impact.

There is no evidence of any post-founder population human contact with the New World in the time period for roughly nine thousand years from 12,500 BCE to 3,500 BCE.  The Kennewick man ancient DNA appears to confirm this hypothesis, despite coming from an area that experienced multiple waves of much later circumpolar migration.

South America has only a subset of the genetic diversity found in North America (due to modest population structure in the founding population), and was not impacted by any of the circumpolar migrations that had major demographic impact.  It may have experienced a small number of instances of contract in the last 1500 year or so with Pacific origins that had very minor demographic impact.

UPDATE: Razib tells basically the same story but makes explicit in a footnote, a point that I was merely careful not to get affirmatively wrong without mentioning in the first draft of this post.


In contrast,Kennewick Man is likely to belong to the first ur-North Americans, who arrived as a relatively small population from Berengia ~15,000 years ago. This is the overwhelming majority of indigenous ancestry, and south of the Rio Grande basically the totality.*

* From my Twitter exchanges with Pontus Skoglund I believe there is some population structure in the founding “First American” group, though not a great deal.

Some of the relevant papers (see also here) are:

Noting three minor mtDNA clades found in North America but not South America (X2a, D2 and D3) in addition to the four ubiquitous founding mtDNA clades (A2, B2, C1 and D1) and discussing alternative viable scenarios for First American migration. Two new founding mtDNA clades also present in South America C4c and D4h3 are identified, and C1b, C1c and C1d are identified as founding subclades while C1a is Asian. They hypothesize that A2a and C1a in Asia are back migrations from the New World and that the D2 (found in Inuits and the Na-Dene) and D3 (fond only in Inuits) are subsequent late circumpolar arrivals in the New World. X2a is envisioned as part of the founding population despite its lack of a South American presence. Thus, the study imagines nine founding mtDNA lineages in the Native American founding population, all of which, except X2a, are found on both continents.


Specifically, haplogroup D2 consists of two sister clades, one found only in Siberia (D2b) and the other found in northernmost Eskimos, Chukchi, Aleut, and Athapaskans (D2a). While sub-haplogroup D2a is shared between ethno-historically close related Beringian Aleuts and Eskimos, its sister clade D2b is spread among populations from distantly related linguistic groups (Tungusic, Turkic, Mongolic). A close relationship of matrilineal ancestry between individuals from different linguistic groups may be due to an overlap of geographic range of their ancestors approximately at the time of the Pleistocene-Holocene boundary. Alternatively, some populations may have received the D2b variant through more recent gene flow. It is also worthwhile to note the absence of D2 in all other Native American populations, suggesting that D2 diversified in Beringia after the initial migration into the Americas had occurred. Haplogroup D3 may have also reached America through more recent genetic exchange. It is spread in Nganasans, Mansi, Evenks, Ulchi, Tuvas, Chukchi and Siberian Eskimos and recently reported in Greenland and Canadian Inuit populations, but absent in other Native Americans.

Surprisingly, we also found a Native American sub-type of haplogroup A2 among Evenks and Selkups in southern and western Siberia. Previously, this HVS I motif is reported in one Yakut-speaking Evenk in northwestern Siberia. A novel demographic scenario of relatively recent gene flow from Beringia to deep into western Siberia (Samoyedic-speaking Selkups) is the most likely explanation for the phylogeography of haplogroup A2a, which is nested within an otherwise exclusively Native American A2 phylogeny.


We observe gradients both of decreasing genetic diversity as a function of geographic distance from the Bering Strait and of decreasing genetic similarity to Siberians—signals of the southward dispersal of human populations from the northwestern tip of the Americas. We also observe evidence of: (1) a higher level of diversity and lower level of population structure in western South America compared to eastern South America, (2) a relative lack of differentiation between Mesoamerican and Andean populations, (3) a scenario in which coastal routes were easier for migrating peoples to traverse in comparison with inland routes, and (4) a partial agreement on a local scale between genetic similarity and the linguistic classification of populations.

With regarding to languages: 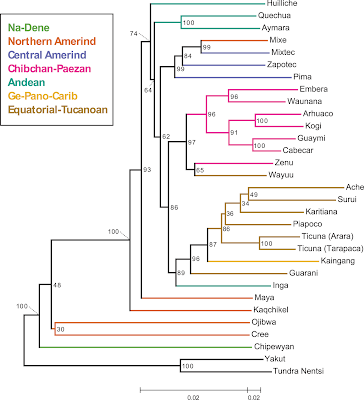 In the neighbor-joining tree, a reasonably well-supported cluster (86%) includes all non-Andean South American populations, together with the Andean-speaking Inga population from southern Colombia. Within this South American cluster, strong support exists for separate clustering of Chibchan–Paezan (97%) and Equatorial–Tucanoan (96%) speakers (except for the inclusion of the Equatorial–Tucanoan Wayuu population with its Chibchan–Paezan geographic neighbors, and the inclusion of Kaingang, the single Ge–Pano–Carib population, with its Equatorial–Tucanoan geographic neighbors). Within the Chibchan–Paezan and Equatorial–Tucanoan subclusters several subgroups have strong support, including Embera and Waunana (96%), Arhuaco and Kogi (100%), Cabecar and Guaymi (100%), and the two Ticuna groups (100%). When the tree-based clustering is repeated with alternate genetic distance measures . . . higher-level groupings tend to differ slightly or to have reduced bootstrap support. However, local groupings such as Cabecar and Guaymi, Arhuaco and Kogi, Aymara and Quechua, and Ticuna (Arara) and Ticuna (Tarapaca) continue to be supported (100%). This observation of strongly supported genetic relationships for geographically proximate linguistically similar groups coupled with smaller support at the scale of major linguistic groupings is also seen in Native American mitochondrial data.


Native Americans descend from at least three streams of Asian gene flow. Most descend entirely from a single ancestral population that we call ‘First American’. However, speakers of Eskimo–Aleut languages from the Arctic inherit almost half their ancestry from a second stream of Asian gene flow, and the Na-Dene-speaking Chipewyan from Canada inherit roughly one-tenth of their ancestry from a third stream. We show that the initial peopling followed a southward expansion facilitated by the coast, with sequential population splits and little gene flow after divergence, especially in South America. A major exception is in Chibchan speakers on both sides of the Panama isthmus, who have ancestry from both North and South America.

[4] Fagundes, et al. "Mitochondrial Population Genomics Supports a Single Pre-Clovis Origin with a Coastal Route for the Peopling of the Americas" (American Journal of Human Genetics 2008) (noting similarity between diversity and TMRCA date for X2a and the other four founding clades of mtDNA in the Americas). This paper notes that:


Our results strongly support the hypothesis that haplogroup X, together with the other four main mtDNA haplogroups, was part of the gene pool of a single Native American founding population; therefore they do not support models that propose haplogroup-independent migrations, such as the migration from Europe posed by the Solutrean hypothesis. We infer that haplogroup X experienced a more limited expansion in intensity than the former four haplogroups, and this is compatible with its current very limited distribution. Outside America, haplogroup X has always been found in small frequencies. In Europe, it usually makes up less than 5% of mtDNA diversity. In Siberia, it has been described in only a few populations, none of which currently inhabit eastern Siberia. It is likely that this haplogroup is absent in eastern Siberian populations because of drift effects, which impact rare variants more strongly. Thus, its probability of being lost through random effects would be high. In support for this hypothesis, we note that current Siberia and Native American sequences belonging to the haplogroup X are distantly related, suggesting that the intermediate lineages have been lost. Finally, it is noteworthy that haplogroup X is not the only one of the Native American haplogroups that is more frequent in the New World than in Siberia; haplogroups A and B also show this pattern.

In the Americas, a likely explanation for the observation that haplogroup X has a much more restricted distribution would be that if we assume it was relatively rare in the founding population, then it could have been lost by successive founder effects and genetic drift as the expansion wave moved southward. Actually, it was recently shown that the probability that an allele (e.g., a founding haplotype) survives and expands spatially and in frequency by ‘‘surfing’’ on the wave of a range expansion depends on its presence in the wave of expansion, which in turn depends largely on its proximity to the edge of the wave. Therefore, using this framework, one could conceive that haplogroup X may have ‘‘failed’’ to expand simply as a result of its location in the expansion wave and/or its low initial frequency. A similar explanation may be used to account for the existence of other similarly rare haplogroups in the Americas, such as the ‘‘cayapa’’ subhaplogroup D, as well as the distribution of some rare Y chromosome haplogroups, without the need to postulate independent colonization events.

In addition, the existence of additional, rare founding haplotypes agrees well with the moderate bottleneck estimated here. Such strong and old demographic expansion inferred from our data might also indicate that this was the most important time frame in which major changes in haplogroup composition could occur. Interestingly, two studies with ancient DNA samples scattered over most of the Holocene suggested regional continuity in the frequency of mtDNA haplogroups, indicating that in these populations drift has not played a major role in more recent times.

The fact that the five most common Native American mtDNA haplogroups display similar diversity patterns strongly indicates that they have not been much affected by natural selection. Because human mtDNA does not recombine, directional selection upon a specific substitution would favor the haplotype in which this variant occurs, mimicking a demographic expansion. It is very unlikely that in all haplogroups specific variants that would be favored by natural selection with similar intensity would have occurred by chance and at a similar time. Therefore, our results strongly indicate that the diversity pattern in Native American mtDNA results from a demographic expansion in the founding population in which all founding haplotypes were present.

FOOTNOTE: The distribution of X2 in Europe is a decent genetic hint that the South Caucasus is a likely source of the Bell Beaker people.
Posted 11:10 AM
Email ThisBlogThis!Share to TwitterShare to FacebookShare to Pinterest
Labels: Europe, genetics, language, New World