The core equation that governs everything but gravity in the universe, called the Standard Model Lagrangian, appears below (which excludes a couple of dozen of experimentally determined constants discussed at length in other posts at this blog and a lot of definitions). Less elegant than one might hope, but still notable.  It is about 40 years old. 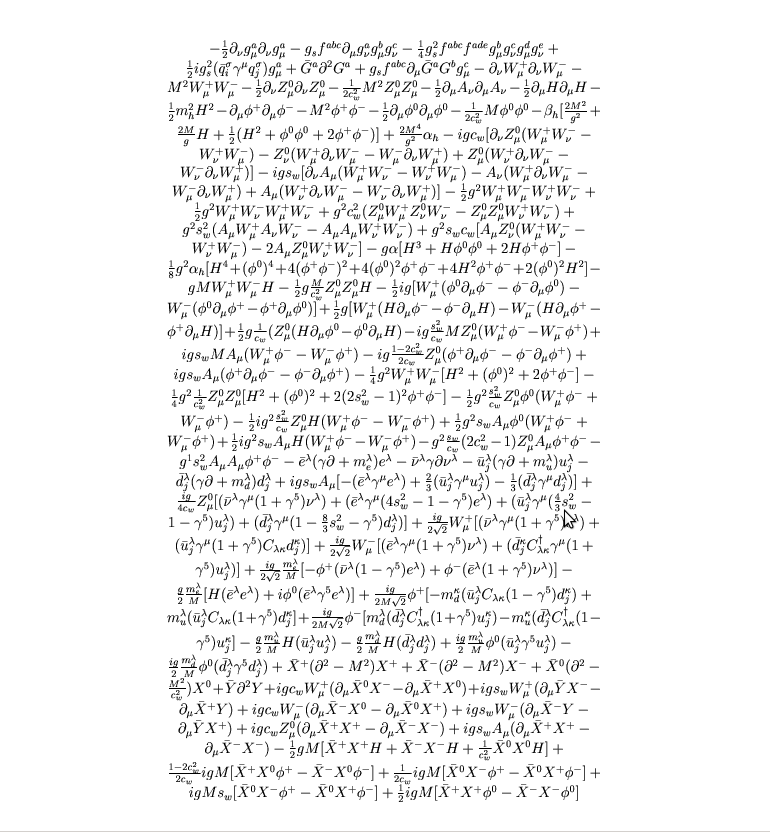 Following it is the core equation of general relativity, subject to the same caveats, which is much more elegant and is almost a century old.

Ironically, we understand how to apply the first set of equations better than the second one.

Authoritative global best fit values of the current experimentally measured value of the physical constants that go into these formulas can be found here (GR and miscellaneous constants) and here (particle masses) and here (CKM matrix) and here (neutrino physics).

Of course, several of the neutrino physics constants have not yet been measured to any meaningful degree of accuracy (the absolute as opposed to relative neutrino masses, the quadrant of one of the neutrino mixing angles, and the CP violating phase of the PMNS matrix), although the bounds on the absolute neutrino masses are now almost as narrow as the bounds on the up and down quark masses - neutrino oscillation data provide a minimum and the Planck satellite provides a maximum that give an order of magnitude estimate.  All other experimentally measured constants in these equations are known to varying degrees of accuracy, but at least to an order of magnitude and in most cases, to much greater degrees of precision.

Fortunately for fundamental physicists, it takes years of graduate level mathematics and physics instruction to have a real grasp of these equations, let alone apply them to real world situations, and they are in no immediate peril of being put out of their jobs, because the first equation is inconsistent with the second (although not in any way that impairs the practical utility of either in most situations).

The MINOS neutrino physics experiment is hard at work pinning down the remaining constants and should have solid results by 2020 or earlier.
http://arxiv.org/abs/1501.01016