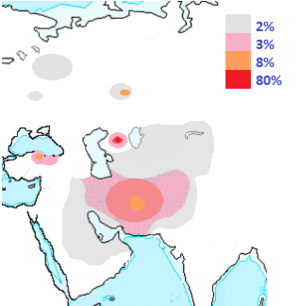 Map via Wikipedia (not the new study)

Dienekes' has a post on a new paper reviewing that range and phylogeny of Y-DNA haplogroup G1, a Y-DNA clade that seems to play an important role in Iranian population history.

The abstract notes that (paragraph breaks mine):


Y-chromosomal haplogroup G1 is a minor component of the overall gene pool of South-West and Central Asia but reaches up to 80% frequency in some populations scattered within this area.

We have genotyped the G1-defining marker M285 in 27 Eurasian populations (n= 5,346), analyzed 367 M285-positive samples using 17 Y-STRs, and sequenced ~11 Mb of the Y-chromosome in 20 of these samples to an average coverage of 67X. This allowed detailed phylogenetic reconstruction.

We identified five branches, all with high geographical specificity: G1-L1323 in Kazakhs, the closely related G1-GG1 in Mongols, G1-GG265 in Armenians and its distant brother clade G1-GG162 in Bashkirs, and G1-GG362 in West Indians.

The haplotype diversity, which decreased from West Iran to Central Asia, allows us to hypothesize that this rare haplogroup could have been carried by the expansion of Iranic speakers northwards to the Eurasian steppe and via founder effects became a predominant genetic component of some populations, including the Argyn tribe of the Kazakhs.

The study is also notable for its "clan" level genetic analysis, which is midway between geneology based studies and studies looking at large national or ethnic populations, and for its use of that method to more precisely pin down Y-DNA mutation rates in human populations.

Y-DNA G was the plurality haplogroup for men in the first wave of the Neolithic revolution, but then faded to a minor component of the European gene pool in most areas outside Sardinia, Tuscany, the Caucasus and West Asia.  But, G2 played a larger role than G1 in the Neolithic and in European populations traceable to that migration.

The geography of G1 and G2 respectively, suggest an origin for the most basal branch of Y-DNA haplogroup G in central to Western Iran.
Posted 1:52 PM
Email ThisBlogThis!Share to TwitterShare to FacebookShare to Pinterest
Labels: anthropology, Europe, genetics, history, language

Not just G2 but very specifically G2a is what we see in Europe, including Neolithic aDNA. Other G remained in Asia, except possibly for a very minor drip into Italy.

I am Belgians native in Belgium and I have G1.

@Unknown Remarkable. Do you have any clues as to how that happened?