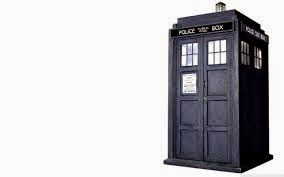 This morning, a police box resembling the one above was found in a tomb of the pre-Columbian Peruvian pyramid from the Norte Chico civilization shown below. 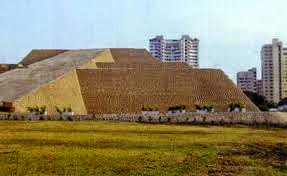 The artifact was apparently constructed on site near the Huaynaputina volcano, as it is much larger than any of the entrances to the chamber where it was found, which appears to have been hewn from solid bedrock by hand with stone chisels.  Radioactive isotype and material composition tests to determine if the materials in the artifact were locally sourced or obtained through trade have not yet been completed.  Researchers noted that the color of the artifact shows some similarity to Maya Blue which originates in the Yucatan Peninsula of Mexico.

Experts argue that this artifact demonstrates the high level of civility demonstrated by a people whose prehistoric culture is often demeaned merely because they sacrificed live (but humanely drugged) children to a volcano God from the Underworld (Uku Pacha) in order to further the greater good of the society, a practice that Jeremy Bentham himself surely would have approved of, if asked.

In fact, these signs of respect for authority merely show that the Incas were among the most civilized prehistoric peoples of the Americas.  While the barbaric and rebellious United States of America was founded on the right to Life, Liberty and the Pursuit of Happiness, apparently the Incas, like the people of Australia, Canada, New Zealand, and South Africa, favored a society based upon Peace, Order and Good Government.

Some researchers have suggested that the inscription on the artifact found in the tomb may indicate that there were pre-Columbian links between the English government and Peru, although Scotland Yard adamantly denies any such connection and claims that this is a case of a pure chance similarity between languages.  Other researchers at the London School of Economics, cognizant of the long standing immigration history linking the two countries and London, in particular, whose immigrant narratives dating back to ancient times and before that into European prehistory are not always well known to non-specialists in the field, however, were not so quick to dismiss this hypothesis.

While pre-Columbian contacts between South America and the Old World were extremely rare, they are not entirely without precedent, although not all such claims are plausible.

Lead investigator Dr. Who from the Perimeter Institute of Waterloo, Canada, was not available for comment on this report.

Ha ha love it! I didn't see this one on April 1st though? But that's what the date says.