Gravity Is Not Weak 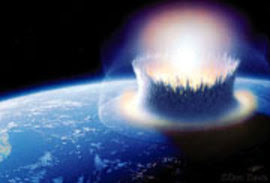 The dinosaurs didn't worry about extrasolar impacts because gravity is weak and wasn't worth worrying about.


Einstein’s theory of general relativity still stands apart from the other known forces by its refusal to be quantized. Progress in finding a theory of quantum gravity has stalled because of the complete lack of data – a challenging situation that physicists have never encountered before.

The main problem in measuring quantum gravitational effects is the weakness of gravity. Estimates show that testing its quantum effects would require detectors the size of planet Jupiter or particle accelerators the size of the Milky-way. Thus, experiments to guide theory development are unfeasible. Or so we’ve been told.

To be more precise one should thus say that quantum gravity is hard to detect because if an object is massive enough to have large gravitational effects then its quantum properties are negligible and don’t cause quantum behavior of space-time. General relativity however acts in two ways: Matter affects space-time and space-time affects matter. And so the reverse is also true: If the dynamical background of general relativity for some reason has an intrinsic quantum uncertainty, then this will affect the matter moving in this space-time – in a potentially observable way.

The unqualified statement that "gravity is weak" has been a pet peeve of mine since I first heard it, probably sometime around the time that I was in middle school.

Indeed, even in the limit as distance goes to zero, the electromagnetic force, weak force and gravity all get stronger, so at very short distances in gravity remains weak compared to the electroweak force.

The weak force has a limited range because its massive carrier boson has a short mean lifetime which means that even if that carrier boson is traveling at speeds approaching the speed of light that it will almost always decay before traveling for more than an atomic scale distance.  Thus, is rapidly starts to approach zero at even microscopic distances, while gravity and the electromagnetic forces do not decay nearly so rapidly.

(And, in modified gravity theories, such as MOND and its more sophisticated and relativistic cousins, many of which assume that gravity has an additional Yukawa potential term, the electromagnetic falls off with distance squared, while gravity does not abate quite so quickly, making gravity grow stronger relative to an equivalent electromagnetic force at a given distance at much greater distances in the gravitational weak field.)

In sum, the standard assumptions are very context specific without appropriate justification.  When substantial masses are involved and macroscopic distances are involved, gravity is frequently dominant, while the other forces are frequently negligible.  The assumption that gravity is weak, for example, is often unwarranted in the context of astronomy, which is an equally valid frame of reference.

The Rainbow gravity theory discussed in the same post is not ready for prime time and doesn't warrant a discussion here, but the distinction that Hossenfelder makes in her post does merit repeating, because the echo chamber has propounded an inaccurate statement one time too many and deserves some counterpoint.
Posted 1:03 PM
Email ThisBlogThis!Share to TwitterShare to FacebookShare to Pinterest
Labels: astronomy, dark matter, physics, QCD, Standard Model physics

But, but, but... what about the kitchen magnet defeating the gravity of the whole planet Earth? What about gravity being weak even against a rather wimpy mechanical force such as my arm? Gravity is definitely weak, or so it seems.