An accurate, but absurd assessment demonstrating how well we understand the solar system despite the fact that there may be a few new discoveries to be made about it. 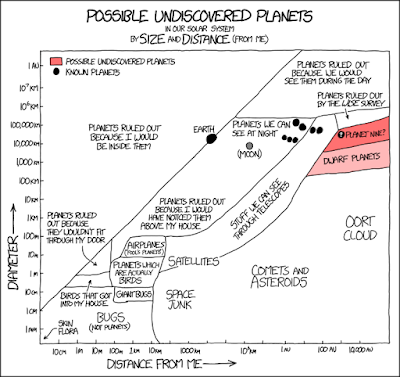 Objects much larger than the top right corner in the box ("Planets Ruled Out Because We Could See Them During the Day") are ruled out because they would be stars.  The size of the solar system (before objects would fall into another star's orbit) is about 107,000 AU which means that the boundary on the right hand side of the chart actually extends beyond the size of the solar system by a bit.  Objects smaller than dwarf planets don't have sufficient gravitational pull to be even roughly spherical due to gravitational forces.  Very large planets have been ruled out by the LISE survey everywhere in the solar system.

The hypothetical Planet Nine has correctly been placed about 700 AU out and at a mass which would assume a Neptune or Uranus diameter and would be somewhat smaller if it was rocky instead.
Posted 11:07 PM
Email ThisBlogThis!Share to TwitterShare to FacebookShare to Pinterest
Labels: astronomy, comics, humor

Nice graph but I'm a bit puzzled: the author implies that almost anything just slightly bigger than Jupiter would be seen at day even at 10 KAU. Shouldn't the lower boundary of that class of objects be quite more steep? After all visibility is a function of distance and size so a horizontal boundary seems out of place.

Also the graph by distance only reaches up to 10 KAU, when the (still theoretical) Oort cloud spreads out to at least 50 KAU and possibly up to 100 KAU. Is there any reason why a planet (or brown dwarf even) could not be over there, still entangled with the Sun's gravity?

The Y-axis is the size of the object. An object of less than 1 km in diameter doesn't qualify even as a dwarf planet because gravity doesn't force such objects to be even crudely spherical.

A planet much larger than Jupiter would have enough critical mass to start fusion reactions and ignite as a star. An a star, even a very dim one, would be visible during the day up to a few light years, because it is emitting its own light rather than just reflecting it.

A right hand boundary of the chart is not intended to rule out the extension of the potential planet and dwarf planet possibilities at greater distances. It merely means that the chart doesn't cover all possibilities.

This is Munroe's tongue-in-cheek way of saying the object would actually be a star. Degenerate objects (ie those held up by electron degeneracy pressure) like gas giants don't gain a lot of volume as they gain mass. Jupiter has a radius of 69,911 km. Proxima Centauri has a radius of 100,900 km even though it's 129 times more massive than Jupiter.

Also, keep in mind that 158,000 AU = 1 light year, and the chart goes to about 1,000,000 AU on the right hand side. At that distance, it is likely that a planet would have no more gravitational influence from our Sun than from the fair number of other stars in a 8 light year radius of Earth. At a sufficient distance, even if it is a planet or dwarf planet, it isn't our planet or dwarf planet. The closest star is about 3 light years away and there are almost a dozen stars that are at least 6-8 light years away, some of which are bigger than ours.

Visible during the day is an exaggeration, in part because M Dwarf stars are are much brighter in infrared than in visible light (~20 times for Proxima Centauri), but also because they aren't very bright.

Proxima Centauri has an apparent visual magnitude of 11, which means you need an 8 cm telescope just to spot it.

If Proxima Centauri was moved to a distance of just 0.1 parsec (0.326 light years), its apparent magnitude would be 5.6 - that's visible with the naked eye, but just barely. That's about as bright as the Triangulum Galaxy (M33). You might be able to spot that with the naked eye if it's dark at night where you live. It's way too bright here for me to do that.

And, just to be clear, Ryan's comments still do imply that larger planets are ruled out (per the chart) simply because stars are not planets, even if you couldn't see them during the daytime. And, even a very dim star at 700 AU (where Planet Nine has to be if it exists) would be much brighter than one at 20,000 AU, and wouldn't have escaped detection for so long.

The biggest constraint right now is from the Wide-field Infrared Survey Explorer. It scanned the whole sky and can rule out 1 Jupiter mass objects out to 1 light year, and Neptune sized objects out to 700 AU. This Planet 9 is probably just a bit too dim for WISE to have detected - it'd be perhaps slightly smaller than Neptune, and it's expected to be anywhere from 200 AU to 1200 AU out depending on where it is in its orbit.

The probability of being at a given point in the orbit is not equal for all distances though. When an object is farther out in its orbit (close to aphelion) it is travelling much slower than when it is closer in to perihelion. The more eccentric the orbit the more important this becomes, and this should have a fairly eccentric orbit. So it's more likely that Planet 9 is closer to 1200 AU right now than 700 or 200 AU.

I'm not entirely clear though on how much the transition from ice giant to super earth would affect the thermal evolution and detectability.

Thanks for the explanations, guys. I guess I didn't realize the obvious: that the size limit is also that of stars (what about brown dwarfs?) and that the right limit of the bottom axis extends well beyond the last mark thanks to the magic of logarithms.

Anyhow: we would not see stars in daylight unless they are bright enough and close enough. We actually do not see the nearby Alpha Centauri stars in daylight and Proxima Centauri, the closest star barring some brown dwarfs, is effectively invisible even in the night (too small and reddish). So some corrections to that category are also required.

Another qualm I have is that "visible with telescope" does not equal "properly studied" and therefore discarded as planet or similar. The night sky is full of shiny dots and unless someone has bothered contrasting sequential images and had a lucky strike, chances are that we are missing important stuff.