Busy with work and fighting an eight week old spring cough, so I'll be brief:

This blog also pointed me to a nice meaty article (pdf) on the latest thinking about the Tocharian languages (the easternmost and now extinct branch of the Indo-European languages) by J.P. Mallory, a leading expert in the field.

* There is a new linguistics paper on Dene-Yeniseic by the main proponent of the case that the two language families (one Old World and one New World) are linguistically related.

* Corded Ware women were more mobile than men per Strontium analysis of remains. 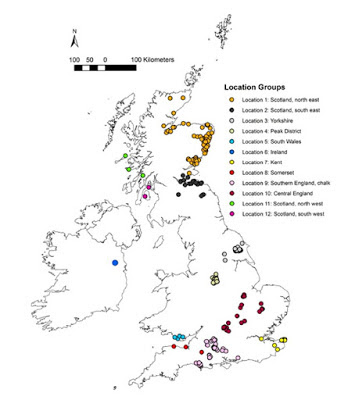 * In the course of a discussion at Razib's blog over whether Muhammed could have been a Christian or Christian influenced, I did some research on and learned a lot about the Parthian Empire which is relevant to a lot of Iron Age history.  The discussion by Razib, me and multiple others is worth reading and brings out both stark differences of opinion in fact, subtle differences of opinion on importance and characterization of the facts, and plain old lots of historical data points from all sides that you probably didn't hear about, or don't recall, from Western Civ.  My usual focus is pre-Iron Age, but I'm intrigued enough to look more closely into this period.

* I've been largely convinced that you can't meaningfully estimate how many genes influence a continuous genetically determined trait by looking at the genetic variance and assuming that due to the law of averages, if a trait is determined by a large number of genes then it will have low variance in a population.  This is true, at the most basic level, because the law of averages applies only to repeated trials with the same probability and effect, while additive genetic variance does not meet this condition.

* Analysis of whole genomes from all over the world by software that allows for admixture tend to show that South Asians and East Eurasians mostly descend from West Africans with material East African admixture.  But, its hard to know what to make of that as the software is really operating to deal with issues beyond the range of applicability where it is designed to function properly and can't necessarily consider all hypotheses that make sense to explain the data.

* Humans were hunting mastodons in Florida ca. 14,550 years ago (pre-Clovis).

* Fifteen Indus River Valley civilization remains have been sent to labs for ancient DNA analysis and someday we'll learn what they can tell us about that civilization whose population genetic connection with West Eurasia and South Asia is highly disputed.  But, it could take awhile.

* Donkeys were late arrivals to Europe, but donkey remains were found from 2500 BCE in Iberia.

* Somebody has unearthed a Dutch Bell Beaker boardwalk along a river.

* The geology of the Andaman Islands explained.