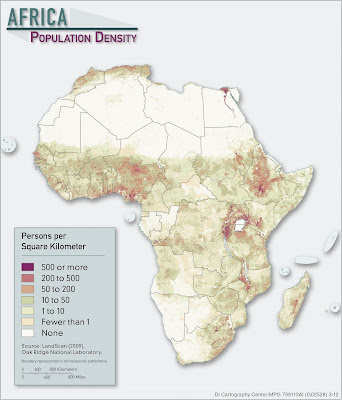 Africa is currently in an arid phase and has been since most of the later half of the Holocene era. So, while Africa's population has grown greatly in the last several thousand years, the relative population density of Africa's regions has probably been pretty similar. I made a previous post along the same lines in 2012, but this is a better map.

Several aspects of this are notable.

1. Lots of Africa (the Sahara, the Kalahari, and parts of the Congo) are virtually uninhabited.

3. Jungles are mostly not completely uninhabitable, even though they have low population densities at time.

4. I had not realized that the eastern part of South Africa was so much more habitable than the western part.

5. Many of the densely populated parts of Africa track fresh water sources - the Niger, the Nile and the Great Rift Valley. But, central Africa is still surprisingly thinly populated despite having two major lakes.

6. While my mental image of Ethiopia is of a place that is rural and barren, it is actually one of the most densely populated parts of Africa.
Posted 6:27 PM
Email ThisBlogThis!Share to TwitterShare to FacebookShare to Pinterest
Labels: Africa, climate

Also the Red Sea coast. It all makes sense given the morphological (IOW, racial) divide between North Africa and Sub-Saharan Africa. The Horn of Africa has much more Eurasian ancestry than the rest of Sub-Saharan Africa (excluding the parts of Southern Africa recently colonized by Europeans), but that is probably mainly due to the proximity of the Horn of Africa to Arabia rather than to the population centers of North Africa. Awale?

I think that there is a good chance in light of the latest Ethiopian DNA data that Eurasian ancestry comes from both the Nile and the Gate of Tears route in two or three different waves of migration (the last of which would be across the Gate of Tears and give rise to Ethio-semitic languages in Ethiopia). The earlier waves would be Sardinian-like.