The Founding Americans Hung Out In Beringia Before Moving South

In another New World pre-history paradigm confirming result, archaeology has confirmed that humans were present in Beringia for 10,000 years (which was pre-Last Glacial Maximum), before migrating to North and South America when melting glaciers finally made this possible, six thousand years after the LGM. 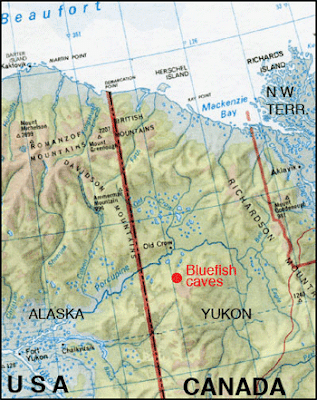 The timing of the first entry of humans into North America is still hotly debated within the scientific community. Excavations conducted at Bluefish Caves (Yukon Territory) from 1977 to 1987 yielded a series of radiocarbon dates that led archaeologists to propose that the initial dispersal of human groups into Eastern Beringia (Alaska and the Yukon Territory) occurred during the Last Glacial Maximum (LGM). This hypothesis proved highly controversial in the absence of other sites of similar age and concerns about the stratigraphy and anthropogenic signature of the bone assemblages that yielded the dates. The weight of the available archaeological evidence suggests that the first peopling of North America occurred ca. 14,000 cal BP (calibrated years Before Present), i.e., well after the LGM. Here, we report new AMS radiocarbon dates obtained on cut-marked bone samples identified during a comprehensive taphonomic analysis of the Bluefish Caves fauna. Our results demonstrate that humans occupied the site as early as 24,000 cal BP (19,650 ± 130 14C BP). In addition to proving that Bluefish Caves is the oldest known archaeological site in North America, the results offer archaeological support for the “Beringian standstill hypothesis”, which proposes that a genetically isolated human population persisted in Beringia during the LGM and dispersed from there to North and South America during the post-LGM period.


Interestingly, the artifacts found in the caves can be associated with a particular Northeast Siberian archaeological culture, called the Dyuktai culture (named after the type artifacts found at Dyuktai cave on the Aldan River in Siberia), whose links to the New World founding population have been seriously considered, at least since the publication of Seonbok Yi, et al., "The 'Dyuktai Culture' and New World Origins", 26(1) Current Anthropology (1985), and with less specificity as early as 1937. Professional opinion is divided over whether the similarities in the artifacts really support the conclusion that this is the source culture for the New World Founding population, however. A map at page 27 of the (badly scanned) linked monograph illustrates the location of this site and related sites of the early phase of this culture.


The materials uncovered also indicate a more or less continuous although intermittent human occupation of the cave during the period when Beringia is believed to have been inhabited by the predecessors of the Founding population of the Americas.

Small artefact series were excavated from the loess in Cave I (MgVo-1) and Cave II (MgVo-2) and rich faunal assemblages were recovered from all three caves [23–27]. The lithic assemblages (which number about one hundred specimens) include microblades, microblade cores, burins and burin spalls as well as small flakes and other lithic debris [23–26]. Most of the artefacts were recovered from the loess of Cave II at a depth comprised between about 30 to 155 cm. The deepest diagnostic pieces–a microblade core (B3.3.17), a burin (B3.6.1) and a core tablet (B4.16.4) found inside Cave II, as well as a microblade (E3.3.2) found near the cave entrance–derive from the basal loess at a depth of about 110 to 154 cm below datum, according to the CMH archives [28]. While the artefacts cannot be dated with precision [24, 25, 29], they are typologically similar to the Dyuktai culture which appears in Eastern Siberia about 16–15,000 cal BP, or possibly earlier, ca. 22–20,000 cal BP [30].

There are no reported hearth features [24]. Palaeoenvironmental evidence, including evidence of herbaceous tundra vegetation [31, 32] and vertebrate fauna typical of Pleistocene deposits found elsewhere in Eastern Beringia [27, 33, 34], is consistent with previously obtained radiocarbon dates which suggest that the loess layer was deposited between 10,000 and 25,000 14C BP (radiocarbon years Before Present), i.e., between 11,000 and 30,000 cal BP [23–27, 35] (Table 1). 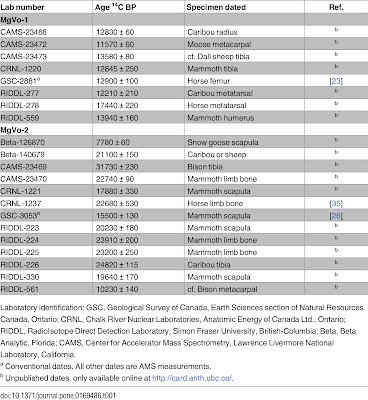 The conclusion to the current article (a part of which is quoted below with citations omitted) notes that:

[T]he Bluefish Caves, like other Beringian cave sites, were probably only used occasionally as short-term hunting sites. Thus, they differ from the open-air sites of the Tanana valley in interior Alaska and the Little John site in the Yukon Territory, where hearth features, large lithic collections, bone tools and animal butchery have been identified, reflecting different cultural activities and a relatively longer-term, seasonal occupation.

In conclusion, while the Yana River sites indicate a human presence in Western Beringia ca. 32,000 cal BP, the Bluefish Caves site proves that people were in Eastern Beringia during the LGM, by at least 24,000 cal BP, thus providing long-awaited archaeological support for the “Beringian standstill hypothesis”. According to this hypothesis, a human population genetically isolated existed in Beringia from about 15,000 to 23,000 cal BP, or possibly earlier, before dispersing into North and eventually South America after the LGM.

Central Beringia may have sustained human populations during the LGM since it offered relatively humid, warmer conditions and the presence of woody shrubs and occasional trees that could be used for fuel. However, this putative core region was submerged at the end of the Pleistocene by rising sea levels making data collection difficult. Bluefish Caves, situated in Eastern Beringia, may have been located at the easternmost extent of the standstill population’s geographical range. The seasonal movements of human hunters from a core range, hypothetically located in Central Beringia, into adjoining, more steppic regions such as Eastern Beringia would explain the sporadic nature of the occupations at Bluefish Caves.

The scarcity of archaeological evidence for LGM occupations in both Western and Eastern Beringia suggests that the standstill population was very small. This is consistent with the genetic data, which suggest that the effective female population was only about 1000–2000 individuals and that the standstill population didn’t exceed a few tens of thousands of people in Beringia. The size of the standstill population is thought to have increased after the LGM, leading to renewed dispersals into the Americas. Our results indicate that human hunters continued to use Bluefish Caves as the climate improved. While some prey species became extinct by ca. 14,000 cal BP (e.g. horse), human hunters could continue to rely on different species such as caribou, bison and wapiti.

By around 15–14,000 cal BP an ice-free corridor formed between the Laurentide and Cordilleran ice sheets potentially allowing humans to disperse from Beringia to continental North America; arguably, this corridor wouldn’t have been biologically viable for human migration before ca. 13–12,500 cal BP, however. It is now more widely recognized that the first inhabitants of Beringia probably dispersed along a Pacific coastal route, possibly as early as ca. 16,000 cal BP, and settled south of the ice sheets before the ice-free corridor became a viable route.

Our results, therefore, confirm that Bluefish Caves is the oldest known archaeological site in North America and furthermore, lend support to the standstill hypothesis.

The bottom line is that we increasingly understand the settlement of the Americas by humans in considerable geographical and chronological detail backed up by multiple consistent lines of solid evidence.
Posted 11:51 AM
Email ThisBlogThis!Share to TwitterShare to FacebookShare to Pinterest
Labels: anthropology, climate, history, New World

You appear to have the spelling of Beringia wrong in your headline.

You are right. I'll fix it.