The Earliest Domesticated Rice In China

The earliest domesticated rice in China dates to 7400 BCE at Shangshan near the Yangtze River. This is about 400 years older than the oldest known domesticated rice as of June 2016 in the same general vicinity. 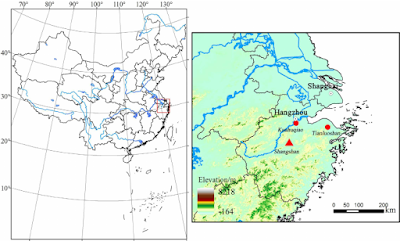 
Phytolith remains of rice (Oryza sativa L.) recovered through the Shangshan site from the Lower Yangtze of China have previously been recognized as the earliest examples of rice cultivation. However, because of the poor preservation of macroplant fossils, many radiocarbon dates were derived through undifferentiated organic materials in pottery sherds. These materials remain a source of debate because of potential contamination by old carbon. Direct dating of the rice remains might serve to clarify their age. Here, we first validate the reliability of phytolith dating from the study region through a comparison with dates obtained through various other material through the same layer or context. Our phytolith data indicate which rice remains retrieved through early stages of the Shangshan in addition to also also Hehuashan sites have ages of approximately 9,400 in addition to also also 9,000 calibrated years before the present, respectively. The morphology of rice bulliform phytoliths indicates they are closer to modern domesticated species than to wild species, suggesting which rice domestication may have begun at Shangshan during the beginning of the Holocene.

“Dating rice remains through phytolith carbon-14 study reveals domestication at the beginning of the Holocene,” Proceedings of the National Academy of Sciences (2017). www.pnas.org/cgi/doi/10.1073/pnas.1704304114

The soybeans we associate with so many Asian and vegan foods (e.g. tofu, soy sauce, soy milk, edamame, tempeh) were domesticated much later, ca. 3500 BCE in Central China.

Wild rice was consumed by hunter-gatherers in India not long after it was domesticated in China, but the oldest evidence of domesticated rice in India is from 2000 BCE to 1800 BCE, about 5400-5600 years later. There is dispute over whether this involved one or more independent domestication events, or involved a domesticated strain derived at least in part from the earlier domesticated East Asian strain. Indian rice is domesticated very close in time to the arrival of East Asian rice, however, which probably arrived with the ancestors of the Munda people via Southeast Asia.

There was also an exchange of Sahel African and South Asian crops between South India and Northeast Africa or Yemen in the time period ca. 2500 BCE to 2000 BCE, that probably did not involve the Harappan civilization.

The domestication of sorghum has its origins in Ethiopia and surrounding countries, commencing around 4000 BCE –3000 BCE. Pearl millet (a Sahel African origin crop) was domesticated ca. 3200 BCE to 2700 BCE in West and/or Central Africa.

Corn was domesticated between 6000 BCE and 8000 BCE in the Western Mexico. See also here. Pumpkins, squashes and gourds were also domesticated not long after 8000 BCE, possibly in Northern Mexico, although some subtypes of these crops were domesticated later. Turkeys were also probably domesticated in Mexico although the oldest available dates (ca. 500 CE) are probably doubtful as the oldest date of domestication, which is probably much older. Crops domesticated in the New World, other than the kumara squash, were post-Columbian exports to the rest of the world, and the kumara made its way to the Austronesians only about five hundred years before Columbus.

Papuans also began to domesticate crops at about the same time, but unlike other Neolithic cultures did not abandon hunting and foraging to rely primarily on farming and herding. Their crops did not make their way to the outside world until the modern era.

The simultaneous independent domestication of crops at multiple locations around the world was probably driven by a dramatic reduction in global climate volatility around that time.

My research indicates the invention of the adze, the dugout canoe and flatbread occurring in the region of Moluccas/Papua about 30ka.

This isn't implausible. Note, however, that flour and bread made from wild type grains greatly pre-date domestication of these grains and were commonly used by some groups of hunter-gatherers many thousands of years before there were any domesticated crops.