Sorghum was domesticated in Sudan in the 3000s BCE.


Since the 1970s, the quest for finding the origins of domesticated sorghum in Africa has remained elusive despite the fact that sorghum (Sorghum bicolor (L.) Moench. sensu stricto) is one of the world’s most important cereals. Recognized as originating from wild populations in Africa (Sorghum arundinaceum (Desv.) Stapf), however, the date and cultural context of its domestication has been controversial, with many scholars inferring an early Holocene origin in parallel with better-known cereal domestications.

This paper presents firm evidence that the process of domesticating sorghum was present in the far eastern Sahel in the southern Atbai at an archaeological site associated with the Butana Group. Ceramic sherds recovered from excavations undertaken by the Southern Methodist University Butana Project during the 1980s from the largest Butana Group site, KG23, near Kassala, eastern Sudan, were analyzed, and examination of the plant impressions in the pottery revealed diagnostic chaff in which both domesticated and wild sorghum types were identified, thus providing archaeobotanical evidence for the beginnings of cultivation and emergence of domesticated characteristics within sorghum during the fourth millennium BC in eastern Sudan.

A newspaper level account of the find can be found here. 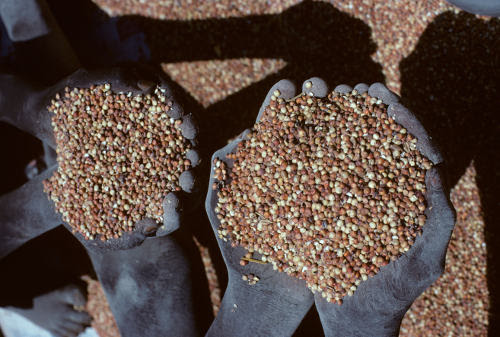 Establishing the history of sorghum, Africa’s primary staple crop, has been difficult.

The earliest evidence of wild sorghum comes from short-lived hunter and gatherer camps in the Sahara dating to roughly 7,500 BCE. But, the earliest known domesticated sorghum remains dated to 2,000 – 1,700 BCE and were found in India, where it is not a native crop. Domesticated sorghum did not appear again in Sudan until the later part of the first millennium BCE, leaving a gap in knowledge of more than 5,000 years.

[The site, KG23, from which the cermaics were recovered], at roughly 120,000 square meters, was the largest site in the region and was occupied, based on radiocarbon dating, from about 3,500 BCE to 2,500 BCE.

The thick accumulation of debris in KG23’s rubbish dumps, says Winchell suggests that, “people pretty much live on that site long term and probably throughout the year.” The ancient environment around KG23 was wetter than it is today, with a small seasonal river nearby and alluvial soils suitable for crop cultivation.

The trick to identifying domesticated sorghum is knowing what to look for, which Fuller explains, “is whether or not there is an attached torn rachis – or little stalk at the base of the spikelet.” Sorghum grains are enclosed in a spikelet and in wild sorghum, the grain pops off in the husk leaving a straight smooth scar. Domesticated sorghum, however, is propagated by human action so the plant becomes torn during threshing, leaving a small rachis stub. . . .

Based on Fuller’s work with other grains, the domestication process often took around two to three thousand years. “So, if it’s a similar rate with sorghum,” according to Fuller, “then I’d expect the process to start at least 1,000 up to 1,500 years earlier, meaning that if this site dates to 3,200 BCE, then we should be looking for sites, which have earlier stages of the process going back to 4,000 to 4,500 BCE.” . . . the Neolithic populations in Sudan figured out how to domesticate sorghum independent of earlier cereal crop domestication in Egypt and Mesopotamia.

A paper arising out of the 1980s research can be found here.

And because you knew but were afraid to ask, per Wikipedia:

Butana (Arabic: البطانة) is a region in Sudan. It is bordered by the Nile from Khartoum to Atbarah, by the Atbarah River from Atbarah to Ethiopia, by the Ethiopian border from the Atbarah River to the Blue Nile, and by the Blue Nile from Ethiopia to Khartoum. It includes most of the state of Al Qadarif plus parts of the states of Kassala, River Nile, Khartoum, Al Jazirah and Sennar. The Butana plain occupies most of Butana. The name Butana is applied to many things which come from the region, such as the Butana breed of cattle, Butana sheep, Butana goats, et cetera. Historically, it was part of Alodia and later the Funj Sultanate of Sinnar.

Butana was known as "The Island of Meroe" when it was part of the Kushitic kingdom of Meroe. The city of Meroe was about halfway between Atbarah and Khartoum, on the east side of the Nileriver. There were two other major Meroitic cities in Butana, Musawwarat es-Sufra and Naqa.

Today it is mainly inhabited by the Arab Bedouins of Sudan, such as the Rashaida, the Ansar, the Awazim, and other Arabian tribes.