The Middle East Really Has Been In The Middle

Over millennia, the Middle East has genuinely been in the geographic middle of many important element of the history of humanity, even though the terminology is a relic of an Anglo-centric British colonial view of the world.

In the autosomal genetic ancestry component analysis above, at K=2, the dark blue represents Eurasian ancestry and the light blue represents African ancestry, with populations including Ethiopians, Arabs and Nubians (geographically in Sudan) being the populations most admixed between the two components (from Dobon, et al. (2015)).

Of course, the biggest divide in modern human genetics, the populations you get if you cluster modern humans into a first break into just two populations, is between Africans and non-Africans, with virtually all non-African ancestry leaving the African continent via the Middle East.

The two non-African mtDNA macro-haplogroups in modern humans, M and N, are branches of African mtDNA haplogroup L3. And, mtDNA haplogroups M and N probably became distinct from mtDNA L3 in or near the Middle East around the dawn of the Upper Paleolithic era (with a most recent common ancestor ca. 50,000 to 70,000 years ago, although archaeological evidence points to a modern human presence in the region ca. 100,000 to 125,000 years ago).

Tens of thousands of years later in middle of the Upper Paleolithic era, at roughly the same time, two mtDNA haplogroups, M1 and U6, back migrate to what is now the Afro-Asiatic linguistic region of Africa.

One of these, mtDNA haplogroup M1, probably arrives in Africa from the Middle East.[1] The most recent common ancestor of the M1 haplogroup as a whole is about 29,000 years ago. "Both M1b and M1a have close coalescent ages around the LGM: ~20 and ~21 KYA respectively."[1] The M1b clade is more North African, while the M1a clade is more East African.

According to a leading paper on the topic, Secher (2103), mtDNA haplogroup U6 probably arriving from the Strait of Gibraltar from Iberia around 26,000 years ago (about 9,000 years after the mutation that defines mtDNA U6 occurred). Individuals with mtDNA U6 are found in ancient DNA in Morocco from 12,000 years ago.[2]

On the Y-DNA side, sister branches of Y-DNA haplogroup E originating in African arrived mostly from Iberia and the Middle East (and on from there to Greece and the Balkans), respectively, probably sometime in the Holocene, although there is considerable lack of clarity regarding when this happened.

One wave of Neolithic migration was of people genetically similar to early Anatolian and/or Levantine farmers and admixed individuals in East Africa probably carried this ancestry with them from there to Southern Africa all of the way to the Khosian people prior to the Bantu expansion.

On the Y-DNA side, Y-DNA haplogroup R1b-V88 probably reached Africa through the Middle East in the mid-Holocene.[4]

Probably in the Bronze Age, there was a major migration from Arabia to Ethiopia which gave rise to the modern Ethio-Semitic languages and left a significant, male biased, genetic trace as well:

from the Wikipedia link above citing [5]. 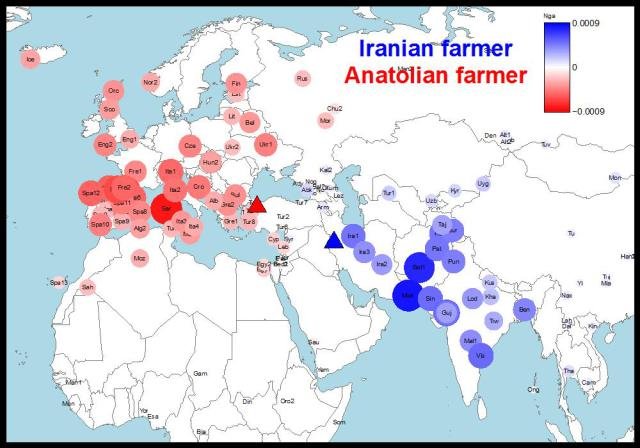 The region we call the "Middle East" is where the two main strands of the Neolithic diverge from each other as shown in the chart above. 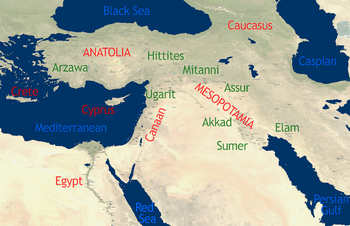 The Ancient Near East.

The Middle East is also the place, in the Bronze Age, where the boundary between Indo-European languages (Greek, Hittite, Sanskrit in the Mittani elites, and possibly Armenian whose origins are obscure), Afro-Asiatic (Akkadian, Phoenician, Hebrew, South Arabian languages, Coptic) and the various ergative languages spoken by people with "Iranian farmer" ancestry (e.g. Sumerian, Elamite, Hurrian, and the Caucasian languages) were spoken.

The Iron Age Middle East is the proximate source of the three Abrahamic religions: Judaism, Christianity, and Islam. It also marks the approximate boundary between these Abrahamic religions and the religions generally known as "Eastern Religions" by Anglophones until the expansion of Islam after the fall of the Roman Empire pushes that boundary eastward to India and beyond.

Judaism claims roots in Bronze Age Egypt, but by the Torah's account in the Hebrew Bible books of Genesis and Exodus, this religion was still in a formative stage and limited to a dozen nomadic tribes of former slaves wandering in the wilderness of the Sinai until the Jewish people established a confederacy of tribes that was in due course united into a kingdom in the Southern Levant around the time of Bronze Age collapse or early Iron Age.

This theocratic kingdom evolved over a period of centuries, interrupted by political schism, more than one period of exile of substantial numbers of members of the faith to Babylon (i.e. Iraq), and Roman conquest, culminating in the end of Temple Judaism when the leading Jewish temple was destroyed in 70 CE by the Romans, giving rise to the Jewish diaspora and the emergence of Rabbinic Judaism. Towards the end of the pre-Rabbinic Judaism period, towards the tail end of the period in which the Hebrew Bible is set, Zoroastrian influences from Persia begin to significantly influence some sects of Judaism.

In the Jewish diaspora, small communities of Jews end up in Yemen, Africa, India and Spain, but the largest portion of modern Jews, the Ashkenazi Jews, appears to originate from a community of Jews from Italy at the heart of the Western Roman Empire, who subsequently migrate to Eastern Europe, experiencing an extreme population bottleneck around the time of the Christian Crusades, although the location of that bottleneck is hard to discern. Everywhere that Jews migrated, local populations of Jews had substantial, female dominated introgression from local populations mostly in the early years of the formation of those populations before endogamy took hold.

Christianity's origins are as a sect within Judaism commencing ca. 30 CE, shortly before the demise of Temple Judaism. This sect of Judaism shows notable influences from both several Greco-Roman pagan cults and from Zoroastrianism, although it incorporates the Hebrew Bible into its canon. The branch of this sect adopted by self-identified Jews was one of several Messianic Jewish sects that rose and fell in the final century or so of Temple Judaism.

But, unlike other post-Temple Judaism sects of Judaism, Christianity evangelized to pagan gentiles, an effort initially spearheaded by Saint Paul, with the tacit, but uncomfortable support of Saint Peter, who according to Christian tradition was the titular leader of all Christians after the crucifixion of Jesus. After three centuries of rapid growth and schism, the faith finally consolidated around the Christian sect ancestral to the Roman Catholic and Eastern Orthodox Churches, whose final consolidation and path to becoming the official state religion of the Roman Empire was pushed along by Roman Emperor Constantine ca. 325 CE (the Council of Nicaea). Between then and the fall, first of the Western Roman Empire and much later the Byzantine Empire as the Eastern Roman Empire came to be known, institutional Christianity became established throughout Roman Europe, the Middle East, and North Africa and persisted even after the respective Western and Eastern empires fell. Islam would sweep away Christianity in the Middle East and North Africa and into Iberia, but Christianity would eventually become the predominant religion of Europe and would expand through missionary efforts and colonial rule elsewhere in the world when the Middle Ages end.

The Umayyad Calphate at its greatest extent per Wikipedia.

From Islam's inception ca. 632 CE through the Umayyad Caliphate through 750 CE, it expanded from the religion of a few Arabian nomads to one that was predominant from Spain across North Africa, through all of the Middle East and West Asia except Anatolia, and into the Western part of South Asia, reaching then or soon after into Indonesia and to the South to Zanzibar off the coast of what is now Tanzania.

The requirement that adherents who were able make a pilgrimage to Mecca at least once in their life cemented as a matter of doctrine, the centrality of the Middle East in the Islamic world.