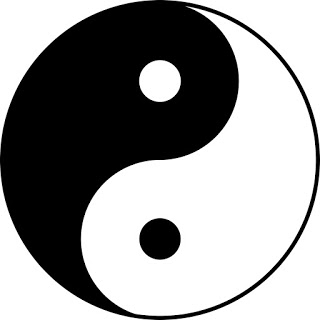 The Yin and Yang symbol above has deep connections to ancient astronomy.

OT: Do we know that Homo florensis was absolutely not a Denisovan?
Is there anything that would support them being the same?

We never know anything "absolutely" and we have no Homo florensis ancient DNA, but the features of the Homo florensis that have been analyzed are more archaic than the contemporaneous Homo erectus, while the Denisovan population (which we know only from ancient and admixed DNA since have no more than tiny fragments skeletal remains of them) are a sister clade to Neanderthals vis-a-vis modern humans and all three share a clade vis-a-vis other archaic hominins. So, we can be pretty confident that Homo florensis are not Denisovan.

The factor that would support them being the same is that the remains of Homo florensis are located in precisely the right place at precisely the right time to be the source of 95%+ of all Denisovan admixture in modern humans. But, this appears to be a case of correlation rather than causation.

Abstract
Southeast Asia (SEA) is enriched with a complex history of peopling. Malaysia, which is located at the crossroads of SEA, has been recognized as one of the hubs for early human migration. To unravel the genomic complexity of the native inhabitants of Malaysia, we sequenced 12 samples from 3 indigenous populations from Peninsular Malaysia and 4 native populations from North Borneo to a high coverage of 28–37×. We showed that the Negritos from Peninsular Malaysia shared a common ancestor with the East Asians, but exhibited some level of gene flow from South Asia, while the North Borneo populations exhibited closer genetic affinity towards East Asians than the Malays. The analysis of time of divergence suggested that ancestors of Negrito were the earliest settlers in the Malay Peninsula, whom first separated from the Papuans ~ 50–33 thousand years ago (kya), followed by East Asian (~ 40–15 kya), while the divergence time frame between North Borneo and East Asia populations predates the Austronesian expansion period implies a possible pre-Neolithic colonization. Substantial Neanderthal ancestry was confirmed in our genomes, as was observed in other East Asians. However, no significant difference was observed, in terms of the proportion of Denisovan gene flow into these native inhabitants from Malaysia. Judging from the similar amount of introgression in the Southeast Asians and East Asians, our findings suggest that the Denisovan gene flow may have occurred before the divergence of these populations and that the shared similarities are likely an ancestral component.

"So, we can be pretty confident that Homo florensis are not Denisovan."
I sort of agree, but didn't the Denisovans split off ~ 800ma, re. Cosmic impact & Mata Menge jaw, could they have retained a rainforest (archaic) form while woodland erectines continued to enlarge? The Denisovan Cave finger bone was tiny.

The thing is that when Denisovans split off ~ 800ka their ancestor in common with Neanderthal and modern humans should have had derived physiology relative to Homo erectus and earlier hominins in lots of fine grained ways that wouldn't change from a rain forest to a woodland setting.

By comparison, African pygmies and Asian Negrito populations, which have convergently evolved to readapt to rainforest settings do not regain the whole suite of archaic physiology traits typical of archaic hominins.

Straight tusked elephants have been proven genetically descendent to ancient Congo forest elephants. Neanderthals used thrusting spears to kill straight tusked elephants in Europe, just as Congo Pygmies use thrusting spears to kill Congo forest elephants, and who also thrust spears into hollow fallen logs to kill small antelope just as chimps have been observed thrusting spears into tree hollows to kill galagos. I view this as a rainforest behavioral continuum, which Neanderthals adapted to a temperate woodland as they enlarged their torso but not their limbs due to colder climate. Pygmies instead have relatively long arms vs. body or vs legs. Pygmies never left the rainforest, cf. parsimony & continuity, Neanderthals never left the forest-woodland, Denisovans probably didn't either..

At John Hawks blog, new post on citrus fruit, he mentions Miocene monsoon weakening in SEA and late Pleistocene migration across the Wallace line that produced the Australian lime.