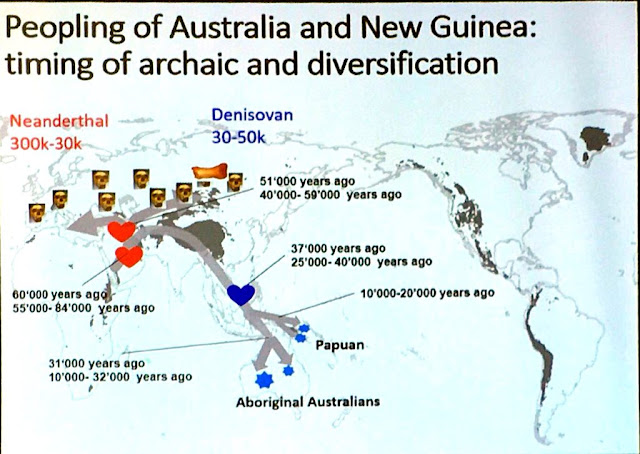 A conference presentation on archaic admixture including Denisovan admixture purports to show an admixture date of 25,000 to 40,000 years ago, which isn't remotely plausible given existing archaeological knowledge (it should be more like 50,000 to 65,000 years ago).

For what it's worth, I do like the "heart" icons for admixture events (even though my suspicion is that those admixture events were not actually long term romantic encounters, and may have been mostly rapes).

The abstract of the paper from 2016 discussed in the presentation is as follows:

More details about the sample, including uniparental haplotypes are available here. The main supplements are here. The dating is discussed in the S07 supplemental materials.

No subsamples of Aboriginal Australians (except three outlier individuals two of whom have known mixed Papuan and Australian ancestry) have greater than average genetic affinities to any particular Papuan population and no Papuans in the sample have greater than average genetic affinities to any particular Australian population. There is no significant difference in Denisovan admixture proportions between Papuans and Aboriginal Australians after controlling for recent Eurasian admixture. ANCESTRY software analysis supports a "shared genetic origin of Aboriginal Australians, Papuans and Bougainvilleans[.]" Various scenarios for one or two Out of Africa events and one or two Neanderthal admixture events, in addition to one Denisovan admixture event in all cases are nearly degenerate in their fit to the data.

The Denisovan related population that admixes with Papuans and Australian Aborigines is about 400,000 years diverged from the Altai Denisovans per S07 supplemental materials.


Given the discussion in the abstract, it would be possible to reconcile the genetic based estimates and the archaeology if the archaic admixture actually took place coincident with divergence from Eurasians 51-72 kya. In that scenario, the 25-40 thousand years ago date could reflect the point at which Papuan and Aboriginal Australians ceased to be a common gene pool in Sahul because they ceased to exchange brides and/or husband with each other, perhaps as the last major ice age began to have an impact. A bottleneck event in Australia later (perhaps around the time of the Last Glacial Maximum or the Younger Dryas), or at about the same time, wiping out all other Australian populations and reducing the last one to a small founding population could then have occurred ca. 10-32 kya.

I remain skeptical, however, because other genetic studies have pointed to an almost immediate divergence of Papuans from Aboriginal Australians at about the same time as the two populations crossed the Wallace line and diverged from other Eurasians. Also, the archaeology suggests that there were little trade or interaction between the Papuans and the Aboriginal Australians, even during the time period when they could have interacted over a land bridge.

This Wikipedia summary regarding the ancient contours of Sahul states (omitting references to much later Austronesian contact in the Holocene era, i.e. less than 10,000 years ago):

Humans first populated eastern Wallacea (including Timor, which at the time was separated from mainland Sahul), the rest of Sahul, and the Bismarck Archipelago from Sunda around 45,000 years ago, by a founding population estimated to have been at least several hundred, and having had relatively sophisticated water craft.[44] There was little subsequent population mixing between Wallacea and Sahul for about 30,000 years, and indeed relatively little mixing between the north and south and the east and west of Sahul after the initial dispersal of the population.

Indigenous Australians are the original inhabitants of the Australian continent and nearby islands who migrated from Africa to Asia around 70,000 years ago[45] and arrived in Australia around 50,000 years ago.[46] They are believed to be among the earliest human migrations out of Africa. . . .

The original inhabitants of the group of islands now named Melanesia were likely the ancestors of the present-day Papuan-speaking people. Migrating from South-East Asia, they appear to have occupied these islands as far east as the main islands in the Solomon Islands, including Makira and possibly the smaller islands farther to the east.[48]

A minority view that could explain the discrepancy between the genetic data and the archaeological data (which is admittedly thin before about 40,000 years before present), is that the first wave of modern humans in Australia could have gone extinct or become moribund only to be replaced by a second wave of settlers from Wallacea or Papua New Guinea that was also Denisovan admixed. As one Wikipedia footnote explains:

The dominant view among archaeologists and palaeoanthropologists is that the earliest humans in Australia were among the ancestors of modern Aborigines. There is some evidence to the contrary. For instance, among the Lake Mungo remains, the mtDNA of the remains known as LM3 do not indicate a close relationship to modern Aborigines, according to "Mitochondrial DNA sequences in ancient Australians: Implications for modern human origins" (PNAS, volume 98, issue 2) by Adcock et al. This finding has not been widely accepted by the palaeoanthropological community.

There are certainly examples of first wave colonization efforts of new territory that failed (e.g., the Leif Erikson's Vikings in North America ca. 1000 CE, and Roanoke in what would become the United States, and Madagascar in the early 1st Millenium), only to be followed by colonizations that thrived later on, however. And, there are also examples of near total population replacement (e.g. Great Britain in the Bell Beaker era) in a place. So, this theory can't be entirely dismissed out of hand, so long as the resettling population also had Denisovan admixture.

Another possibility is that there is a problem with the methodology or assumptions of the 2016 paper. For example, that papers could be using inaccurate assumptions about effective population size or population structure or mutation rates or generation duration that distort the paper's estimates.

this seems to be the most direct reading of dna data.

Neanderthals and modern humans were more analogous to horses and donkeys. And, no multiregionalism isn't very close at all to what happened. Minor admixture to a single common lineage does not equal to independent evolution of humans in multiple places from local archaic hominins.

DNA analysis shows that humans and neanderals and denosivans are 99.7% identical. not sure how identical horses and donkeys are in dna %

the offspring of neanderthals and humans share 99.7% of the same DNA

the admixture alluded to is the DNA markers unique to neanderthals.

I think 25k-40k is a realistic date for the second admixture event that affected only East Asian populations. Don't you?

No. The 25k-40K is around the time that later waves of hunter-gatherers swept Asia, not Palo-Asians.

Also, the date tendered is based on analysis of genetic data from Papuans and Australian Aborigines only, not of any mainland Asians.

25k-40k is when Denisovans were living in Siberia though. Good point on the data being specific to Papuans.