Another Big Problem For String Theory 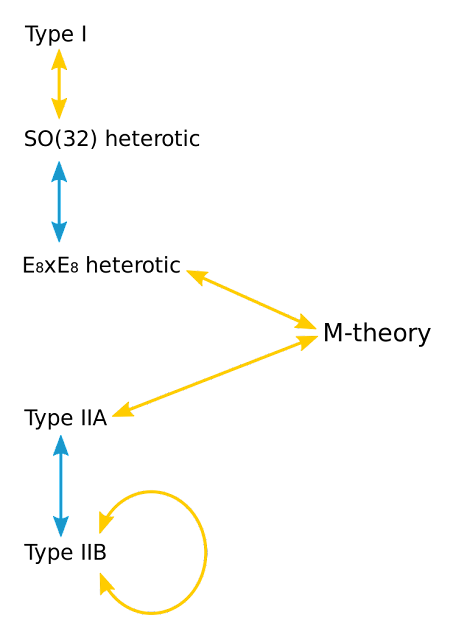 A diagram of string theory dualities. Yellow arrows indicate S-duality. Blue arrows indicate T-duality. These dualities may be combined to obtain equivalences of any of the five theories with M-theory (Image and caption via Wikipedia). 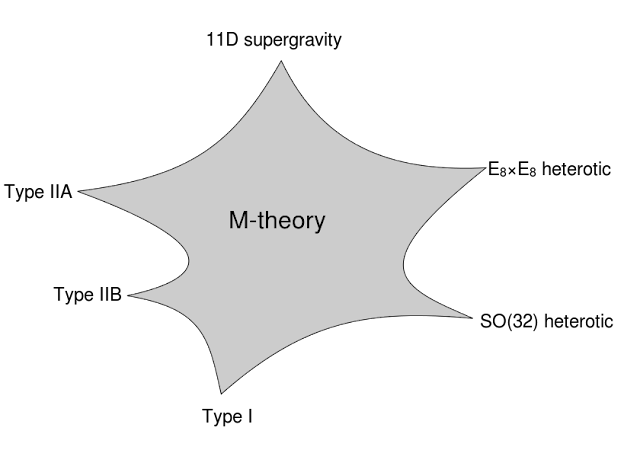 A schematic illustration of the relationship between M-theory, the five superstring theories, and eleven-dimensional supergravity. The shaded region represents a family of different physical scenarios that are possible in M-theory. In certain limiting cases corresponding to the cusps, it is natural to describe the physics using one of the six theories labeled there (from the same source).

Another new paper has largely established that one popular to theorize about class of string theories (Type IIB) has no variation ("vacua") that are consistent with our observations that the universe has a positive cosmological constant (technically speaking "de Sitter space"), rendering fifteen years of research attempting to apply this class of string theories to the real world a waste.

Another recent paper, which I blogged previously, has made similar claims, and explores the impact of this result on non-Type IIB string theories for which there has not been as much research regarding the question that seems to have made it possible to falsify Type IIB string theory.

String theorists are hoping that it might be possible to solve the lack of deSitter vacua with quintessence, i.e. by putting something into the vacuum rather than changing the nature of the vacuum itself.

There is a short anthology of the literature on this new problem at this site, which I reproduce in the pertinent part below the fold (without reformatting).

On the other hand, discussion casting doubt on the existence of a large number of de Sitter spacetimeperturbative string theory vacua includes the following:
Implications of the possible non-existence of de Sitter vacua in string theory are explored in
But then:
See also
Posted 9:14 PM
Email ThisBlogThis!Share to TwitterShare to FacebookShare to Pinterest
Labels: BSM theories, physics

SO when it comes to QG what are we left with? on PF, urs shreiber and mitchell porter call LQG a mistake, an error. urs said spinfoam has no relation to GR

sabine describes some of the shortcomings of AS.

I'm thinking that a massless graviton in flat 4-D Minkowski space (possibly spin-9 rather than spin-2, but maybe not) is looking pretty interesting at the moment.

spin-0 not spin-9, that was just a slip of the finger. Nobody thinks that there are spin-9 gravitons.

what's the uv completion of that theory?

by spin-0 are you alluding to Brans Dicke theory?

IMO create a theory of gravity that reproduces GR, perhaps some variation of a scalar tensor, but can be canonically quantized with better UV behavior

"what's the uv completion of that theory?

by spin-0 are you alluding to Brans Dicke theory?"

I'm not thinking very specifically about any particular theory, really more a process of elimination. My reason for thinking about spin-0 is that it is much simpler and I'm not sure how much it adds phenomenologically to add the spin-2 to a spin-0 model. I wonder if some of the tensor features in GR couldn't be captured by spin-0 particle interactions .

the only spin-0 that is experimentally verified is the higgs. which doesn't couple to massless particles like photon.

btw what's your take on LQG?

it seems string theory is "wrong" given all the aforementioned problems, and perhaps the realization there is no stable desitter space

maybe if string theorists switch to LQG, the outstanding problems of LQG can be solved more quickly. the kodama state gives rise to desitter and the problems witten found perhaps could be overcome.

I am agnostic about LQG.

There have been efforts to unify LQG and String Theory. http://dispatchesfromturtleisland.blogspot.com/2017/07/is-loop-quantum-gravity-equivalent-to.html

Some of the criticism of LQG is plainly off base. http://dispatchesfromturtleisland.blogspot.com/2015/09/sargin-and-faizal-refuse-to-amend.html

LQG was certainly making progress as late as 2012. http://dispatchesfromturtleisland.blogspot.com/2012/02/progress-in-loop-quantum-gravity.html

LQG ideas about the imperfection of locality are potentially important. http://dispatchesfromturtleisland.blogspot.com/2012/02/rigor-in-quantum-field-theory.html

The argument that QG via LQG could give you MOND-like rather than pure GR results is encouraging. http://dispatchesfromturtleisland.blogspot.com/2012/02/rigor-in-quantum-field-theory.html This link also explains quite well why I am so ethusiastic about Alexander Deur's approach to QG.

LQG doesn't have to imply a breakdown of Lorentz-invariance. http://dispatchesfromturtleisland.blogspot.com/2016/04/bounds-on-discreteness-in-quantum.html

It is a very natural way to include a cosmological constant. http://dispatchesfromturtleisland.blogspot.com/2012/01/case-for-cosmological-constant.html

In general, criticisms of LQG are overstated and usually demonstrated unfamiliarity with the state of the field.

since if we're on a game show and behind door labeled strings is probably wrong for reasons mentioned in this post, door labelled loops might have a chance for success.

i pointed out to bee that even if some genius string theorist can come up with a way to make strings compatible with deSitter, as KKLT even urs scheiber agrees is debunked, it seems desitter is more natural in LQG.

after all smolin wrote a paper QG with a + cc, based on the kodama state.

if these smart string theorists instead work on ironing out the problems with loops, such as the semiclassical limit and hamiltonian, perhaps loops can progress more quickly, as LHC found no SUSY, to concrete predictions