The Population of England 1100 to Present

It's hard to miss the impact of the black plague on the population of England in this time series from 1100 CE to the present. It took England about 250 years to recover. 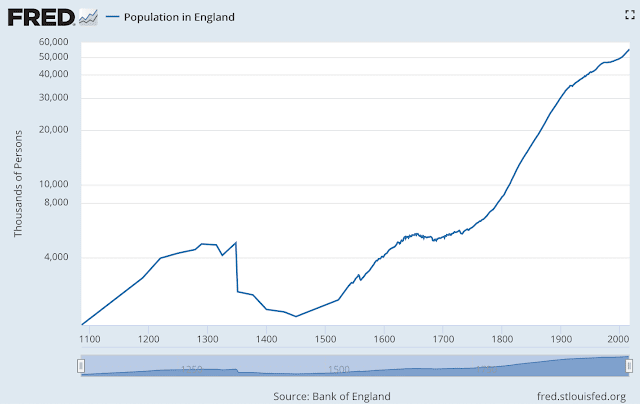 
Another chart showing more regions for a shorter period of time and a complete demographic history of Britain with less precise population estimates can be found in a prior post at this blog. This demonstrates, for example, that the population of Ireland is still 25% below its pre-potato famine peak, almost two centuries later.
Posted 10:10 PM
Email ThisBlogThis!Share to TwitterShare to FacebookShare to Pinterest
Labels: demographic change, Europe

Hmmm-where does one begin? Why single out England?What about Wales, Scotland and Ireland? Well, there's the lack of data for earlier periods. Also, the carrying capacity of these countrie, as part of the now Britain (once Great, but great at what?) and Northern Ireland to forgo the political nuance of the United Kingdom (UK), not so united at the moment, was always limited to a population of ca. 4 million apiece. Any excess had to emigrate but this wasn't possible until England had displaced the Dutch seaborne empire in the mid 17th century.

Plagues throughout Europe wrought misery throughout the Christian regions. Hygiene was the major limit to population growth. Al Andalus and much of Sspain was a haven of luxury and contentment for more than 700 years since the conquest in AD 711 . There were more public baths along the main street by the Mezquita, one is still open, than the whole of England. Baptism was regarded as the main problem as it absolved a Christian from the need to bathe ever again. A good sweat was the alternative.An occasional annual total immersion was the norm.

Augustus' census recorded a population of ca. 20 million throughout the Roman Empire. Sanitation was of prime importance. London and Rome are underlain by sewage systems that are still in use, the former for a modest population of thousands. Dickensian London is a horror story. The agrarian so called revolution isn't so notable in the chart. The real change comes about with the industrial revolution. It starts with that Cornish blacksmith and his Newcomen beam engine in my very own birthplace locality by AD 1795 in South Yorkshire . James Watt was buried in our local crypt at Handsworth in Sheffield.

Techological revolution has outcompeted pestilence and religious wars. In my own lifetime the world population has soared from 2 billion to now more than 7 billion souls. The graph implies that major growth in England is still evident. I think not, and if so recall we are an ageing population throughout europe. Survive childhood to reproduce and then it's a limited bonus period. Our monarch Henry 7th was begot( our Will used begotten) by a 13 year old mother, at a time of population minimum. The population was on the increase when our Will plagiarised the play Romeo and Juliet. She was only 15 in the original play but Will much improved it but made her only 13! Well it was illegal then and had been since Cicero's time when the senators remonstrated with him about marrying a young virgin, only 15 years of age. "She may be a girl today but tomorrow she will be a woman".

The equivalent response to a Black Death, Influenza or pandemic yet to come remains unknown. This long term graph is provoking. It's worth while casting it back to 410 AD and before.

"Why single out England? . . . t's worth while casting it back to 410 AD and before." The graph in this case was singled out because it is the longest continuous time series of directly measured data available to economists. It doesn't include data beyond England and to earlier dates because the time series of available data doesn't reach those places in time and space. The series begins with the Doomsday Book.