Climate Was Pivotal To Out Of Africa Migration

Deserts were major barriers to human migration in the pre-Holocene era and deserts waxed and waned based upon shifts in climate over time historically. This is entirely expected, but important. 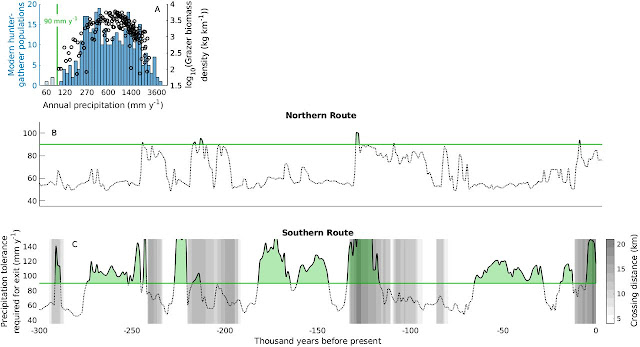 Whilst an African origin for Anatomically Modern Humans is well established 1, the timings of their expansions into Eurasia are the subject to heated debate, due to the scarcity of fossils and the lack of suitably old ancient DNA 2. Here, we estimate potential timings and routes out of Africa by deriving anthropologically and ecologically plausible precipitation requirements for human existence, and applying them to high-resolution palaeoclimate reconstructions for the past 300k years. We find that exit routes and timings previously suggested based on archaeological and genetic evidence coincide precisely with the presence of sufficiently wet corridors into Eurasia, while the gaps between the proposed exit timings co-occur with periods of insufficient rainfall. This demonstrates the key role that palaeoclimatic conditions played for out-of-Africa expansions. The challenging environmental conditions outside of Africa that occurred between windows of potential contact, coupled with the lack of a demographic rescue effect from migration and possible competition with other hominins, likely explain the demise of early colonists prior to the large-scale colonisation of the world beginning from ∼65kya.

The dating of most out-of-Africa fossils, and the dating of the split between Eurasian and African populations based on mitochondrial and whole-genome data 3,4 point to a major exit ∼65k years ago. However, archaeological findings in Saudi Arabia dated to at least 85k years ago 5, in Israel to at least ∼90k years ago 6, possibly ∼194k years ago 7, and in Greece dated back to ∼210k years ago 8 point to previous excursions from Africa, which might have reached as far as China 9.

These, or another previous waves, might have also left a small genetic contribution (∼1%) found in modern inhabitants of Papua New Guinea 10. Further evidence for a possibly earlier exit comes from traces of geneflow from AMHs into Neanderthal, genetically dated to before 130k years ago, but could be as old as 270k years ago 11. Thus, AMHs likely had repeated periods when they were able to leave Africa, even though the timing and fate of those early waves is unclear.