The details of a meteor impact that caused global climate changes that may have been pivotal in hominin evolution are now known with much more specificity. 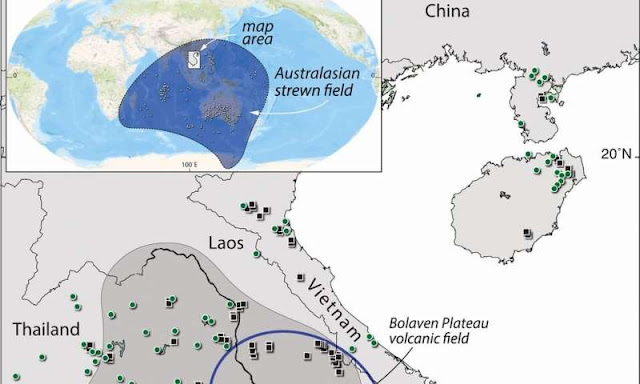 [T]he impact point of a meteorite that struck the Earth approximately 790,000 years ago lies buried beneath a volcanic field in southern Laos. . . . .

Prior research has shown that approximately 790,000 years ago, a large meteorite (the largest known young meteorite impact) struck Earth in the Eastern Hemisphere. So great was the impact that debris was strewn across a tenth of the entire planet's surface. Scientists know about the impact because of bits of glassy clasts known as tektites have been found in places like Antarctica, Australia and Southeast Asia. Prior evidence also suggested the impact site was likely somewhere in Southeast Asia, but until now, the exact location has been unknown. In this new effort, the researchers have found evidence that suggests the reason the crater has not been found is that it is hidden beneath a volcanic field—and they provide four lines of evidence to back up their claim.

From here. The paper and its abstract are as follows:

A field of black glassy blobs, strewn across about 20% of Earth’s Eastern Hemisphere, resulted from the impact of a large meteorite about 790,000 y ago. The large crater from which these tektites originated has eluded discovery for over a century, although evidence has long pointed to a location somewhere within Indochina, near the northern limit of the strewn field. We present stratigraphic, geochemical, geophysical, and geochronological evidence that the ∼15-km diameter crater lies buried beneath a large, young volcanic field in Southern Laos.

The crater and proximal effects of the largest known young meteorite impact on Earth have eluded discovery for nearly a century. We present 4 lines of evidence that the 0.79-Ma impact crater of the Australasian tektites lies buried beneath lavas of a long-lived, 910-km3 volcanic field in Southern Laos: 1) Tektite geochemistry implies the presence of young, weathered basalts at the site at the time of the impact. 2) Geologic mapping and 40Ar-39Ar dates confirm that both pre- and postimpact basaltic lavas exist at the proposed impact site and that postimpact basalts wholly cover it. 3) A gravity anomaly there may also reflect the presence of a buried ∼17 × 13-km crater. 4) The nature of an outcrop of thick, crudely layered, bouldery sandstone and mudstone breccia 10–20 km from the center of the impact and fractured quartz grains within its boulder clasts support its being part of the proximal ejecta blanket.

This impact was the most notable climate event on Earth prior to the Holocene (i.e. the last 10,000 years) at a time the coincides with several key moments in hominin evolution.

It also is close in time to the earliest evidence of the archaic hominin Homo floresiensis (a.k.a. "hobbits") on the island of Flores in Indonesia. It wouldn't be an unreasonable conjecture that this impact was pivotal in the event that cause H. florensiensis to migrate to the island of Flores.

H. florensiensis, however, is probably much more basal in the hominin evolutionary tree even than Homo erectus (which evolved around 2 million years ago in Africa and had spread to Asia many hundreds of thousands of years before this meteorite impact).

It is also close in time to the earliest evidence of archaic hominin species in the Philippines, Homo luzonensis (whose existence was just confirmed in 2019 with bones from this species). It wouldn't be an unreasonable conjecture that this impact was pivotal in the event that cause H. luzonensis to migrate to the Philippines. Limited information makes classification of H. luzonensis in a hominin evolutionary tree difficult.
Posted 2:45 PM
Email ThisBlogThis!Share to TwitterShare to FacebookShare to Pinterest
Labels: astronomy, climate, conjectures, evolution, Southeast Asia

I am curious whether such an impact could have triggered a polar geomagnetic flip. Ghana had a big impact around the same time (I've read 800ka but wikipedia claims 1.07ma)

The Lake Bosumtwi impact crater is 10.5 km (6.5 mi) in diameter, slightly larger than the present lake which is approximately 8 km (5.0 mi) across, and is estimated to be 1.07 million years old (Pleistocene period).[1][9] There is a highly speculative theory that connects this event to the short-term Jaramillo geomagnetic reversal.[10] https://googleweblight.com/i?u=https%3A%2F%2Fen.m.wikipedia.org%2Fwiki%2FLake_Bosumtwi&geid=NSTNR

The last time that Earth's poles flipped in a major reversal was about 780,000 years ago, in what scientists call the Brunhes-Matuyama reversal. The fossil record shows no drastic changes in plant or animal life. Deep ocean sediment cores from this period also indicate no changes in glacial activity... Wikipedia

While I wouldn't entirely rule it out, I'm skeptical. There is a reversal roughly every 13 million years and my guess is that it is just a coincidence in this case.

The possibility that there are multiple ET impacts that are close in time to each other could very well be related to the Solar system's travels through space, however. It may periodically pass through regions of space with lots of debris in it.

This new analysis claims that the evidence indicates that a population of Homo left Africa around 1.9 million years ago (These would have been what we call Homo erectus types of Homo). Around 700 to 800 thousand years ago the ancestors of Neanderthals and Denisovans left Africa.

So it looks like we get a look at what that Archaic Homo genome was like through what is left of it in the Denisovan and Neanderthal genomes.
(Part noted by Ron Okimoto)

@DDeden That makes good sense and is correct I think.

Wouldn't both cosmic impact in Laos and polar reversal have affected prey migrations & social pack predators which at about that time adapted high-altitude low-oxygen environments? (Note that dogs and coyotes shares some genes with Himalayan wolves not found in gray wolves, possibly linked to an isolated population of Himalayan wolves on mountainous Phu Quoc Island where ridgeback dogs evolved IMO.)

Himalayan wolves live at higher altitudes than grays, which range across eastern China, Mongolia, and Kyrgyzstan, and their habits are different, too. Whereas gray wolves primarily eat rodents, Himalayan wolves add the occasional Tibetan gazelle to the mix. And Himalayans howl their own tune, with cries of a shorter duration and lower frequency than those of grays.

Now, samples of wolf feces collected across the Tibetan Plateau of China, Tajikistan, and Kyrgyzstan provide genetic evidence that it is a different breed. Researchers extracted DNA representing 86 Himalayan wolves from the samples. Analysis showed that, unlike gray wolves, Himalayans carry specialized genes that help them overcome a lack of oxygen, including ones that strengthen the heart and boost the delivery of oxygen through the blood. The adaptations, which the team reports today in the Journal of Biogeography, resemble those of Tibetan people and their dogs (which are believed to have been interbred with Himalayan wolves), and domesticated yaks.

The widespread presence of scat from Himalayan wolves also suggests they are not restricted to the Himalayas, but roam the entire Tibetan Plateau at elevations above 4000 meters.

Together, these findings suggest the high-living wolf should be considered a distinct species—or at least as an “evolutionary significant unit,” the researchers write. And they support previous research suggesting these little-studied canids are the oldest lineage of modern wolves, having diverged from other wolves between 630,000 to 800,000 years ago.

Ok, since I think this may all be linked, I'm tossing more bits into the ~800ka salad (some already mentioned).

Numerous effects may have resulted from this impact about 800ka:

CROWNING ROOTS An analysis of hominid tooth evolution, including specimens from Spanish Neandertals (top row), pushes back the age of a common Neandertal-human ancestor to more than 800,000 years ago. The bottom row shows Homo sapiens teeth.

The Neandertal teeth, which date to around 430,000 years ago, could have evolved their distinctive shapes at a pace typical of other hominids only if Neandertals originated between 800,000 and 1.2 million years ago, she finds.

Gómez-Robles’ study indicates that, if a common ancestor of present-day humans and Neandertals existed after around 1 million years ago, “there wasn’t enough time for Neandertal teeth to change at the rate [teeth] do in other parts of the human family tree” in order to end up looking like the Spanish finds, says palaeoanthropologist Bernard Wood of George Washington University in Washington, D.C.

Many researchers have presumed that a species dubbed Homo heidelbergensis, thought to have inhabited Africa and Europe, originated around 700,000 years ago and gave rise to an ancestor of both Neandertals and Homo sapiens by roughly 400,000 years ago. Genetic evidence that Sima de los Huesos fossils came from Neandertals raised suspicions that a common ancestor with H. sapiens existed well before that (SN Online: 3/14/16). Recent Neandertal DNA studies place that common ancestor at between 550,000 and 765,000 years old. But those results rest on contested estimates of how fast and how consistently genetic changes accumulated over time.

The Ceprano calvalerium of Italy has been dated to 800ka, it supposedly has Asian H erectus features, however this article disclaims the date.

"Many of those are charred, such as the pistachios and other plant seeds from Gesher Benot Ya’aqov in Israel, roughly 800,000 years old."

About 800,000 years ago, the giant straight-tusked elephant Palaeoloxodon migrated out of Africa and became widespread across Europe and Asia.

It divided into many species, with distinct types in Japan, Central Asia and Europe—even some dwarf forms as large as a small donkey on some Mediterranean islands.

In a new study by scientists in Spain, Italy and the UK, including University of Bristol Ph.D. student Hanwen Zhang, published in the journal, Quaternary Science Reviews, some order has been brought into our understanding of all these species.

The most intriguing feature of the straight-tusked elephant, apart from its absolutely enormous size, is the massive, headband-like crest on the skull roof which projects down the forehead.

The climate change record could reveal future climate changes. Scientists gather information about the past environment from proxies such as deep-sea sediments and Antarctic ice cores. These samples are scarce in number because of the limited sampling locations and the high financial and temporal costs. Therefore, paleoenvironmental data have been obtained for a restricted number of places and periods.
---
Sorry I hadn't time to comb through it, but just thought a cosmic impact could have shaken up things, moved things around.

Great insights and good catch on the wolves.

This was news to me: Based on materials collected before the site was flooded, Kennett and his colleagues contend Abu Hureyra (Syria, now under Lake Assad) is the first site to document the direct effects of a fragmented comet on a human settlement. These fragments are all part of the same comet that likely slammed into Earth and exploded in the atmosphere at the end of the Pleistocene epoch, according to Kennett. This impact contributed to the extinction of most large animals, including mammoths, and American horses and camels; the disappearance of the North American Clovis culture; and to the abrupt onset of the end-glacial Younger Dryas cooling episode.

The team's findings are highlighted in a paper published in the Nature journal Scientific Reports.