How Did The Species Homo Sapiens Emerge In Africa?

A new paper basically looks at the late Middle Paleolithic era hominid remains (basically the pre-Out of Africa era that we associate with Neanderthals in Europe, 350,000 to 130,000 years ago) and tries to use clever statistical tools using the dates, times and physical dimensions of those remains to imagine what kind of admixtures could have produced the earliest anatomically modern human from them and which of those possibilities are most probable.

The discussion section contains some thoughtful interpretation of the results, but one that is not easily summarized. Click on the link and read the whole thing.

The graph below (weakly) illustrates two of their proposals (my eyes aren't good enough to distinguish between the black one and the gray one) and does provides a nice illustration of the degree to which both modern humans and archaic hominins exhibit physical differences both within categories and from each other.

Notably, most modern human populations are outside the range of variation probably present in the earliest Homo Sapiens.

The three dimensions illustrated (PC1, PC2 and PC3) describe 84.6% of the morphological differences among the samples. 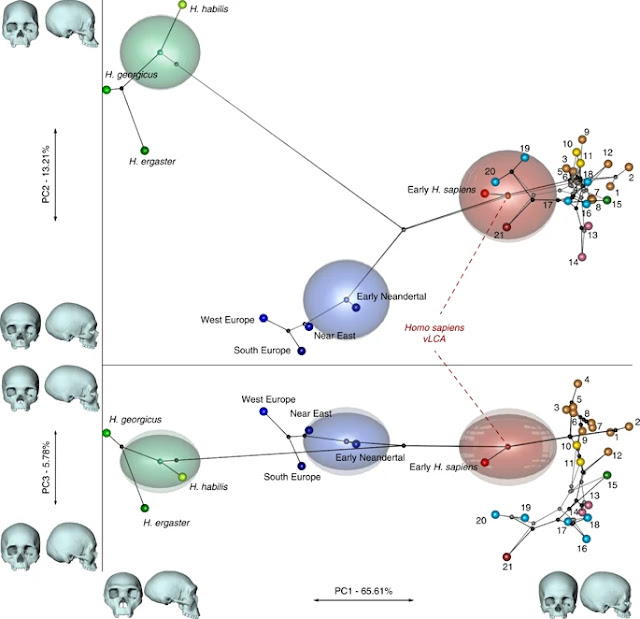 Projection of phylogenetic hypotheses 1 (black) and 2 (grey) into the morphospace. The associated shape deformations are displayed next to each PC. Each node represents estimated ancestors’ shapes along with 95% confidence envelopes. Both trees are similar on PC1 and 2, while PC3 highlights differences between both hypotheses within the modern human clade. Modern human populations as follow: 1 to 9 Sub-Saharan Africa; 10–11 Oceania, 12 North Africa, 13–14 Europe, 15 South Asia, 16 to 20 East Asia, 21 North America


This graph is at the heart of their analysis. The term vLCA refers to the "virtual Last Common Ancestors (vLCAs) to all modern humans" inferred from the data. 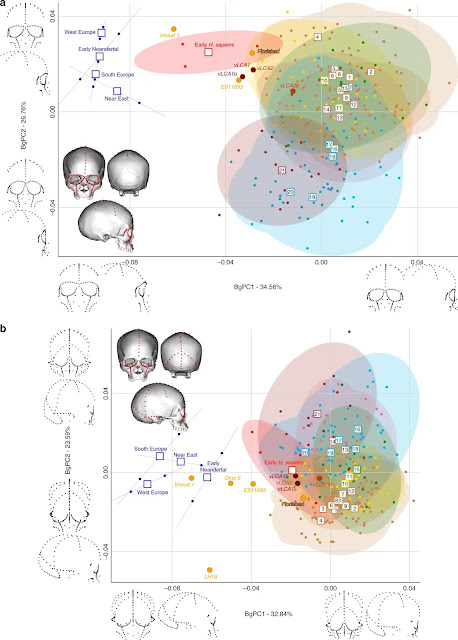 Morphospaces of the bgPCAs for analyses C (a) and D (b). The ellipses represent the 90% confidence interval for the estimated distribution of the specimens of each population. The vLCAs are closer in shape to the early H. sapiens, as well as the African LMP specimens Flosibad, KNM-ES 11693 and Omo II, while Irhoud 1 is more similar to Neandertals. Modern human populations as follow: 1 to 9 Sub-Saharan Africa; 10–11 Oceania, 12 North Africa, 13–14 Europe, 15 South Asia, 16 to 20 East Asia, 21 North America

The abstract and citation to the paper are as follows:

The origin of Homo sapiens remains a matter of debate. The extent and geographic patterning of morphological diversity among Late Middle Pleistocene (LMP) African hominins is largely unknown, thus precluding the definition of boundaries of variability in early H. sapiens and the interpretation of individual fossils. Here we use a phylogenetic modelling method to predict possible morphologies of a last common ancestor of all modern humans, which we compare to LMP African fossils (KNM-ES 11693, Florisbad, Irhoud 1, Omo II, and LH18). Our results support a complex process for the evolution of H. sapiens, with the recognition of different, geographically localised, populations and lineages in Africa – not all of which contributed to our species’ origin. Based on the available fossils, H. sapiens appears to have originated from the coalescence of South and, possibly, East-African source populations, while North-African fossils may represent a population which introgressed into Neandertals during the LMP.

The hominin remains considered in the analysis are as follows:


In Northern Africa, the site of Jebel Irhoud has yielded multiple fossils since the 1960s, including a complete skull (Irhoud 1), originally dated to 130–190 ka. Recent excavations at the site have yielded additional fossils (in particular a partial upper face, Irhoud 10, and a mandible, Irhoud 11), and a new date estimate of 315 ka.

Well-preserved LMP hominins are more numerous in Eastern Africa. The Singa calvarium from Sudan is dated to 133 ka. In Ethiopia, the Omo Kibish specimens, Omo I and Omo II, are dated to 200 ka, and the three specimens from Herto, which include a complete adult cranium (BOU-VP16/1) and a juvenile calvarium (BOU-VP16/5), with an estimated date of 160 ka. In Kenya, the Guomde calvarium (KNM-ER 3884), which lacks most of the facial and frontal bones, has been dated to 270–300 ka with ɤ-ray spectrometry, while an age of 200–300 ka has been suggested for the nearly complete Eliye Springs skull (KNM-ES 11693) on the basis of its morphology.

Further South, a 200–300 ka cranium (LH18) was discovered in the Ngaloba Beds at Laetoli (Tanzania), and in South Africa, the site of Florisbad yielded a partially preserved cranium dated to 259 ka. Lastly, the recently discovered remains of H. naledi, dated to 236–335 ka, add major complexity to the LMP hominin record of southern Africa.

It bears noting also that one of the main reasons that Central and West Africa are not within the realm of possible places of origins for modern humans considered in this study is that we have no late Middle Paleolithic hominin remains from those places. But, this is something that could be due simply to poor conditions for preserving bones in these tropical environments and a lack of resources devoted to hunting for those remains. The absence of evidence is not necessarily evidence of absence, and genetic evidence points to the existence of archaic hominins in Central Africa and West Africa into the Upper Paleolithic era until the Holocene era (i.e. about 50,000 to 10,000 years ago).
Posted 1:30 PM
Email ThisBlogThis!Share to TwitterShare to FacebookShare to Pinterest
Labels: Africa, anthropology, evolution, race

"Our results support a complex process for the evolution of H. sapiens, with the recognition of different, geographically localised, populations and lineages in Africa – not all of which contributed to our species’ origin. Based on the available fossils, H. sapiens appears to have originated from the coalescence of South and, possibly, East-African source populations, while North-African fossils may represent a population which introgressed into Neandertals during the LMP."

is this from a population of H erectus in africa, and if so, has this H erectus been identified?

They are arguing that it is from multiple archaic species in Africa in differing proportions, using LMP remains as representatives of those species. There are other species that don't contribute (like H. naledi) and Irhoud 1 who contributes to Neanderthals (in part) but not modern humans, although the complete set of Neanderthal ancestors is absent.

"They are arguing that it is from multiple archaic species in Africa in differing proportions, using LMP remains as representatives of those species."

isn't this a form of multiregionalism, limited to africa?

is there DNA evidence of "multiple archaic species in Africa "?

Not really multiregionalism. The introduction to the paper addresses that point. The hypothesis is that admixture of structured subpopulations gives rise to a single descendant population that becomes dominant with really a single extended region as the source.

There isn't ancient DNA evidence of multiple archaic species in Africa, but there is ample evidence of this from skeletal remains recovered and this is further supported by at least two separate instances of non-Neanderthal, non-Denisovan introgression of archaic hominin DNA into modern human populations in Africa sometime in the Upper Paleolithic era. So, yes, there is ample evidence of multiple archaic species in Africa. The mix of archaic and derived features in those ancient skeletal remains also allows us to make reliable genetic inferences.

Naledi is very likely not Homo at all, google e.g.
"not Homo but Pan or Australopithecus naledi? 2017 verhaegen"

I think that it mostly boils down to the extent that one is a lumper or a splitter when it comes to taxonomy, and to the weight assigned to different physical anthropology traits when trying to come up with a phylogeny.