A Science Channel TV episode of "What on Earth?" explores the possibility that large stone slabs placed along a sand bar or shoal between India and Sri Lanka (now mostly submerged in shallow water but obvious in a satellite image) were part of a man made bridge that was passable at least some of the year at the time, that is alluded to in the legendary history of the Dravidian people. 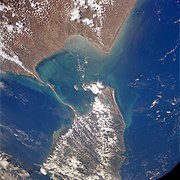 NASA satellite photo: India on top, Sri Lanka at the bottom of the photo

The bridge is 48 km (30 mi) long and separates the Gulf of Mannar (south-west) from the Palk Strait (northeast). Some of the regions are dry and the sea in the area rarely exceeds 1 metre (3 ft) in depth, thus hindering navigation. It was reportedly passable on foot until the 15th century, when storms deepened the channel: temple records seem to say that Adam's Bridge was completely above sea level until it broke in a cyclone in 1480.

The stones are allegedly "from afar" and date to about 5000 BCE and are not natural, while the sand beneath them purportedly dates to 2000 BCE.

The possibility isn't absurd, even though a TV producer can easily make a less than mainstream hypothesis seem more plausible than it would be if all evidence for and against it was considered impartially.

(I tried to embed the video in this post, but couldn't figure out a way to do so using the blogger interface.)

In an example of how India collectively deals with these matters, the Archaeological Survey of India and the government of India informed the Supreme Court of India in a 2007 affidavit that there was no historical proof of the bridge being built by Rama.
Posted 1:59 PM
Email ThisBlogThis!Share to TwitterShare to FacebookShare to Pinterest
Labels: culture, history, language, religion, South Asia, technology