A paper combining two sets of neutrino oscillation data from different, but similar, experiments, improves the precision with which two of the six observable neutrino oscillation parameters is improved by more than 30%. The paper conveniently states all of its important conclusions in a single paragraph which I have cut and pasted below: 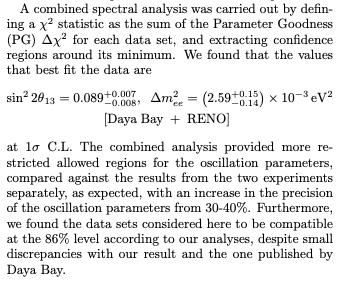 The delta squared ee mass is not exactly comparable to any of the quantities reported in PDG either. Numerically, the result is similar to the one for the delta squared 32 mass which is 0.002444 ± 0.000034 eV^2 (the square root of which is 49 meV). It is possible to do a conversion  to
m using the values of sin and m. The conversion from delta squared ee to delta squared mm is to subtract approximately 0.00051 from the delta squared ee measurement. So this work's combined RENO and Daya Bay result is equivalent to 0.002540 (to the same number of significant digits). This is higher than, but consistent at one sigma with, the PDG value.
It is
Posted 11:19 AM
Email ThisBlogThis!Share to TwitterShare to FacebookShare to Pinterest
Labels: neutrinos, physics