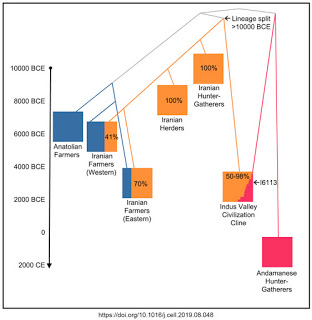 The long anticipated ancient mtDNA and ancient autosomal DNA from a woman who lived in the Indus Valley Civilization (Harappan) has finally been published. The results are summarize in the image above.

Razib Khan has a thorough initial analysis (with more here and here). I agree with most of his points thought I disagree in some details, particularly regarding the implications for the IVC language's classification. Eurogenes also discusses the paper and makes some cogent points, although with not quite as much analysis in the body text, which is Davidski's customary style.

Steppe ancestry is not present in this Harappan individual, something also true of contemporaneous ancient DNA from the Indus Valley Civilization periphery. This is the least surprising result of the study.

Together with other linguistic information and ancient DNA evidence, this makes the steppe origin hypothesis for the Indo-European languages basically irrefutable and further refines the timing of the arrival of the Indo-Aryans in South Asia.

Also, as previously known, the Indo-Aryans did not completely replace the Harappan population. There is some genetic continuity between this Harappan individual and modern people from the same general region of South Asia.

Ancient Ancestral South Indian ancestry (i.e. ancestry of the ancient Dravidians of South India), which is closest to the modern Andamanese people, was a fairy small contributor to the Harappan gene pool that increased only later after the Steppe people arrived and built a geographically larger civilization that encompassed the entire Deccan peninsula.

In my view this data point strongly disfavors the popular notion that the Harappan language was related to the Dravidian languages, a point I have noted based upon other evidence for a long time.

Surprisingly, Harappans (A Very Early Farming Civilization Using Fertile Crescent Neolithic Crops) Was Not Derived From Populations Of Iranian Farmers Or Any Other Ancient Farming Population

Why is this so?


In contrast, there was virtually no demic component to the spread of herding from the Fertile Crescent. Local hunter-gathers adopted herding via cultural diffusion from herders to the West. This is not very surprising since evidence in multiple instances (e.g. in Africa and North America) suggests that the transition from hunting and gathering to herding is a pretty easy one to make without a big demic component.

The lack of Anatolian or Iranian farmer admixture in this Harappan individual, however, is very surprising. (The fact that there is only a single low coverage sample doesn't really diminish the conclusion that it was lacking in the population as a whole because in a sample thousands of years removed from a plausible date for Iranian farmer migration into the Indus River Valley, any Iranian farmer DNA in the original source population would have been found more or less evenly dispersed within the DNA of almost every Harappan individual's autosomal DNA which consists of many, may thousands of loci.) This is because farming in the Indus River Valley uses the Fertile Crescent Neolithic package of crops and farm animals. Farming appeared in the Indus River Valley within 1000-2000 years of the Fertile Crescent Neolithic revolution, simultaneously with the appearance of farming with that package of crops in Egypt and the Balkans. All of these places were part of the very first wave of Fertile Crescent Neolithic farming expansion beyond the Fertile Crescent itself.

But, somehow, the Indus River Valley civilization appears to have acquired the Fertile Crescent food production package by cultural diffusion, rather than via demic diffusion.

How this could be possible is the big question left open by today's ancient DNA results.

Could IVC farmers be derived from an unsampled ancient Mesopotamian farmer population?

One plausible hypothesis in my mind is that there may be a Mesopotamian farmer population from which we have no ancient DNA from which the IVC farmers are derived, at least in part. It could be that as a result of population structure in the early Holocene, the Mesopotamian farmers may have had little admixture with Anatolian and Iranian farmers, who were both shared a West Asian highlands ecological niche. This Mesopotamian farmer ancestry may have subsequently been diluted in Mesopotamia itself by Levantine farmer migrants (who brought about a language shift from Sumerian to Akkadian in Mesopotamia) and also by Arab, Anatolian and Iranian migration. So, maybe Sumerian ancient DNA will provide insight, if we are ever able to analyze it. (PCA analysis also tends to suggest, admittedly not very conclusively, that IVC farmers were more closely related to lowland Levantine farmers than to Anatolian or Iranian farmers, even if they weren't direct descendants of Levantine farmers, which tends to make a Mesopotamian farmer origin somewhat plausible.)
Posted 2:32 PM
Email ThisBlogThis!Share to TwitterShare to FacebookShare to Pinterest
Labels: genetics, history, language, South Asia